Motorcycle swept away by Japanese tsunami washes up in Canada

A Harley-Davidson motorcycle lost in last year’s tsunami has washed up on a Canadian island about 4,000 miles away, according to Japanese media reports.

The rusted bike was found in a large white container where its owner, Ikuo Yokoyama, had kept it. He was located through the number plate number, Fuji TV reported on Wednesday.

“This is unmistakably mine. It’s miraculous,” Yokoyama told Nippon TV when shown photos of the motorcycle.

Yokoyama lost three members of his family in the March 2011 tsunami, and is now living in temporary housing in Miyagi prefecture state. 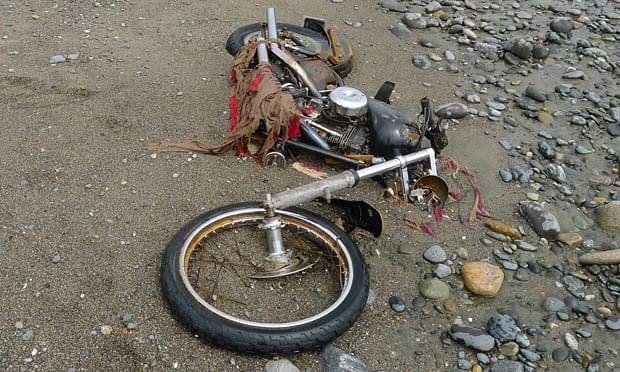 The motorcycle is among the first items lost in the tsunami to reach the west coast of North America. In March, an Alaskan man found a football and later a volleyball from Japan; their owners were located last week using names that had been inscribed on the balls.

Canadian Peter Mark, who found the bike and its container, told Fuji that he “couldn’t believe that something like that would make it across the Pacific.” The report said he found it on 18 April on Graham Island, off the coast of British Columbia.

The motorcycle had a lot of corrosion and a lot of rust, said Mark.

When he saw the Japanese number plate, Mark wondered if it might have drifted from Japan after the tsunami, and contacted a local TV station.

The Fuji report said the motorcycle would be shipped back to Japan, and that the shop that sold it to Yokoyama would help with paperwork and storage.

Debris from the tsunami initially gathered in the ocean off Japan’s north-eastern coast and has since spread out across the Pacific. In February, the National Oceanic and Atmospheric Administration said currents would carry much of the debris to the coasts of Alaska, Canada, Washington and Oregon between March 2013 and 2014, though they correctly predicted that some of it could arrive this year.

Last month, a US Coastguard cutter fired on and sank a fishing boat in the Gulf of Alaska that had drifted from Japan after the disaster. Authorities had deemed the ship a hazard to shipping and to the coastline.

This story first appeared on theguardian.com