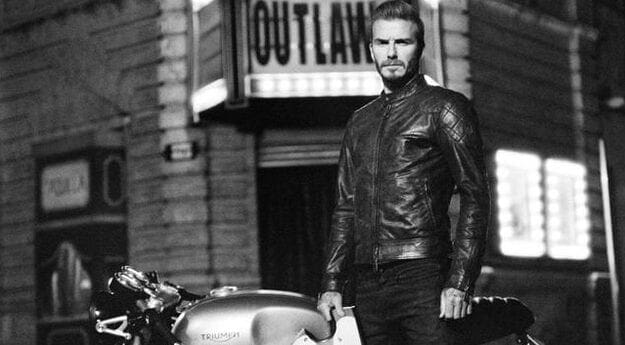 Check out this video – David Beckham as a bad boy biker in  motorcycle movie Outlaws!

The film has been made for Belstaff and released on September 22. It’s described as: “A surreal movie starring the former footballer as a character called The Stranger – a mysterious drifter and motorcycle stuntman…”

Filmed in Mexico with Beckham doing the riding duties on a new water-cooled Triumph Bonneville, the film’s information pitches the main character as this: “David Beckham is The Stranger – a man whose anonymity and bravery can upset the status quo, shift powerand help inspire lost souls. We meet him where he feels most at home – on the road, and alone; lost inthe dusty Mexican landscape and his memories. The Stranger isn’t seeking danger, but when meeting a kindred spirit he’ll do anything to help set it free -he knows that the toughest journeys are the most rewarding. He’s a man who is used to relying on nothing more than his own wits and his motorcycle.”

We’ve got the trailer for the film further below, but here’s a video interview of Beckham talking about the project: