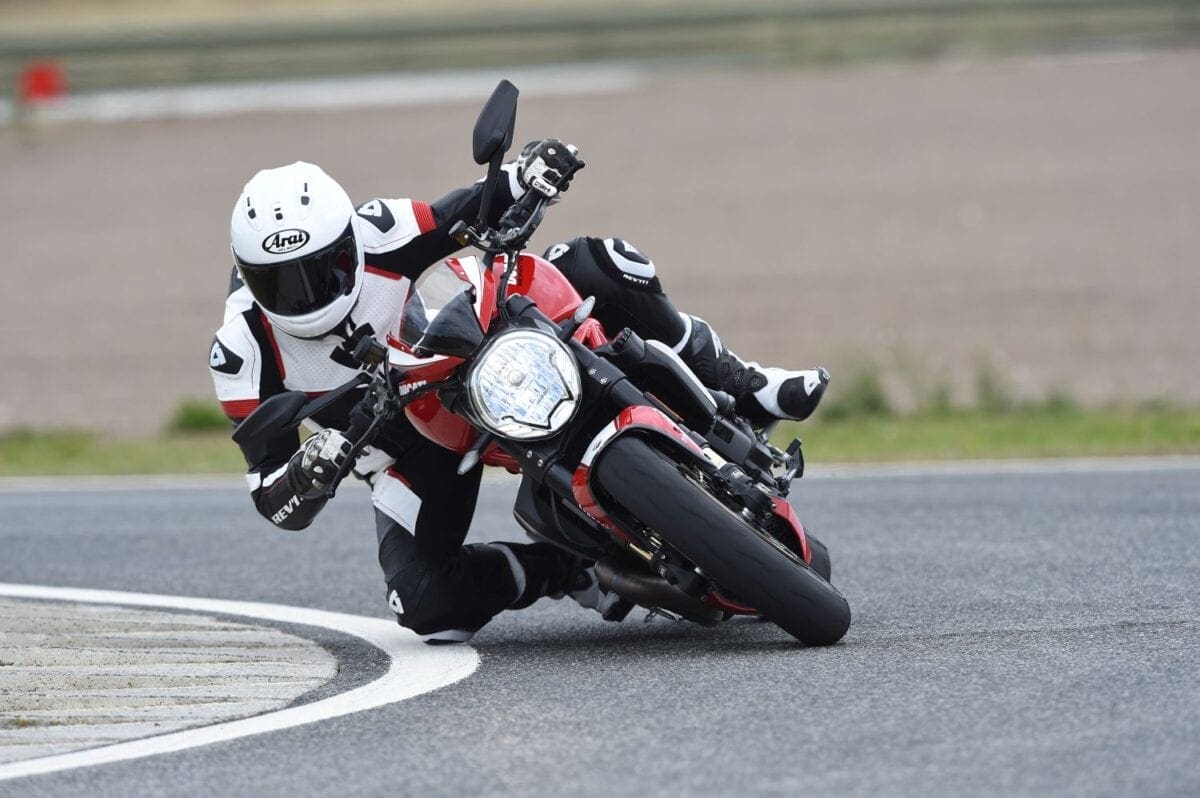 This Ducati’s not all about the power figures, but it’s hard to simply skim over the R’s considerable output of 160bhp. Producing 25bhp more than the Monster 1200 and 15bhp more than the S-spec version, the Italian firm’s latest naked is something of a heavyweight in the street bike sector. Despite sharing the same core Testastretta L-twin engine as its 1200 siblings, even more power has been squeezed from the 1198cc motor by means of an increased compression ratio, a new airbox and the fitment of bigger (56mm instead of 50mm) throttle bodies; as used on Ducati’s sportsbikes. The engine’s also been built to meet Euro 4 legislation (the other two 1200s are Euro 3), requiring several changes to internal components, including the fitment of new and quieter performing pistons, whilst the silencing system has been completely remodelled to meet even stricter emissions laws. 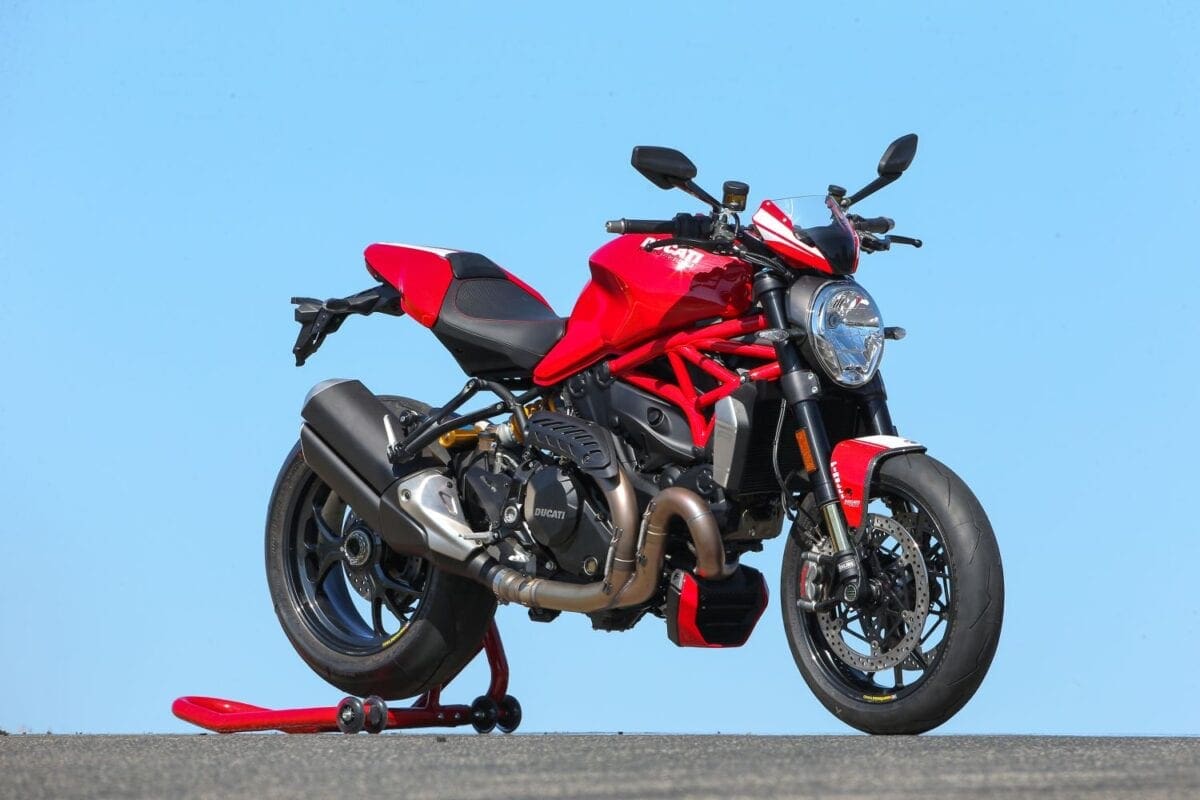 From the outset of the R’s development, which was planned in tandem with the other two Monster 1200s, a target dry weight of 180kg had been established and nothing was going to get in the way of the engineers from reaching that goal. Utilising the same forged, three-spoke wheels as featured on the flagship Panigale 1299 saved 500 grams of unsprung weight, whilst a complete redesign of the subframe saved more than a kilogram from the motorcycle. Slimmer and sharper in its angle, the subframe, which mounts directly to the back of the engine and aids compactness, has a greater focus on solo riding. It’s all about the rider, although a removable seat cowl and detachable pillion pegs – now mounted directly to the subframe – still renders the R a motorcycle fit for two. 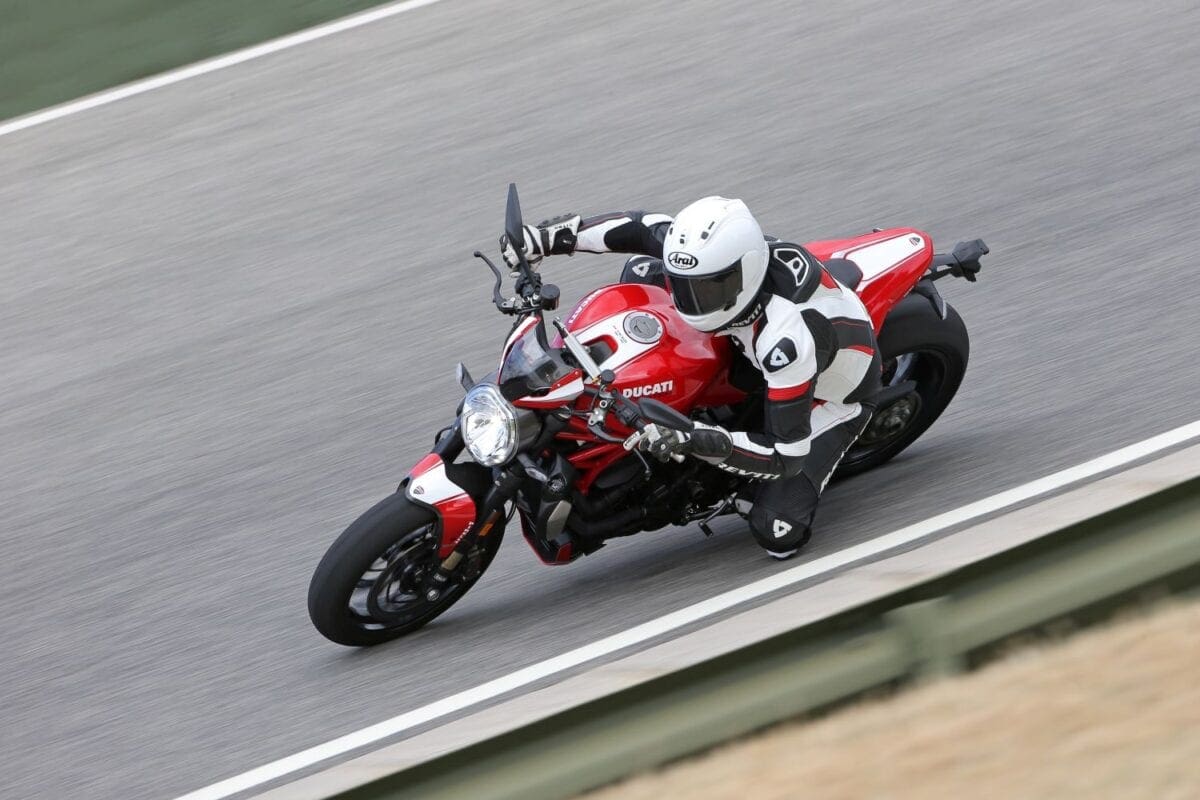 More weight was saved by the fitment of new rider footpegs, which simultaneously opened the bike up to higher angles of lean; another key goal for the R. With a more sporting and track capable focus, improved ground clearance was essential for the more powerful and 2kg lighter Monster. The most logical method to achieve that aim was to increase the fork and shock lengths by 15mm, opening up the door to a maximum 50̊ of lean angle. As is the case with the 1200S, the 1200R is equipped with fully adjustable Ohlins suspension, albeit the R’s damping is firmer. Another addition to the bike is the Ohlins steering damper, which sits just rear of the top yoke and was considered an essential item for both performance and aesthetic reasons. 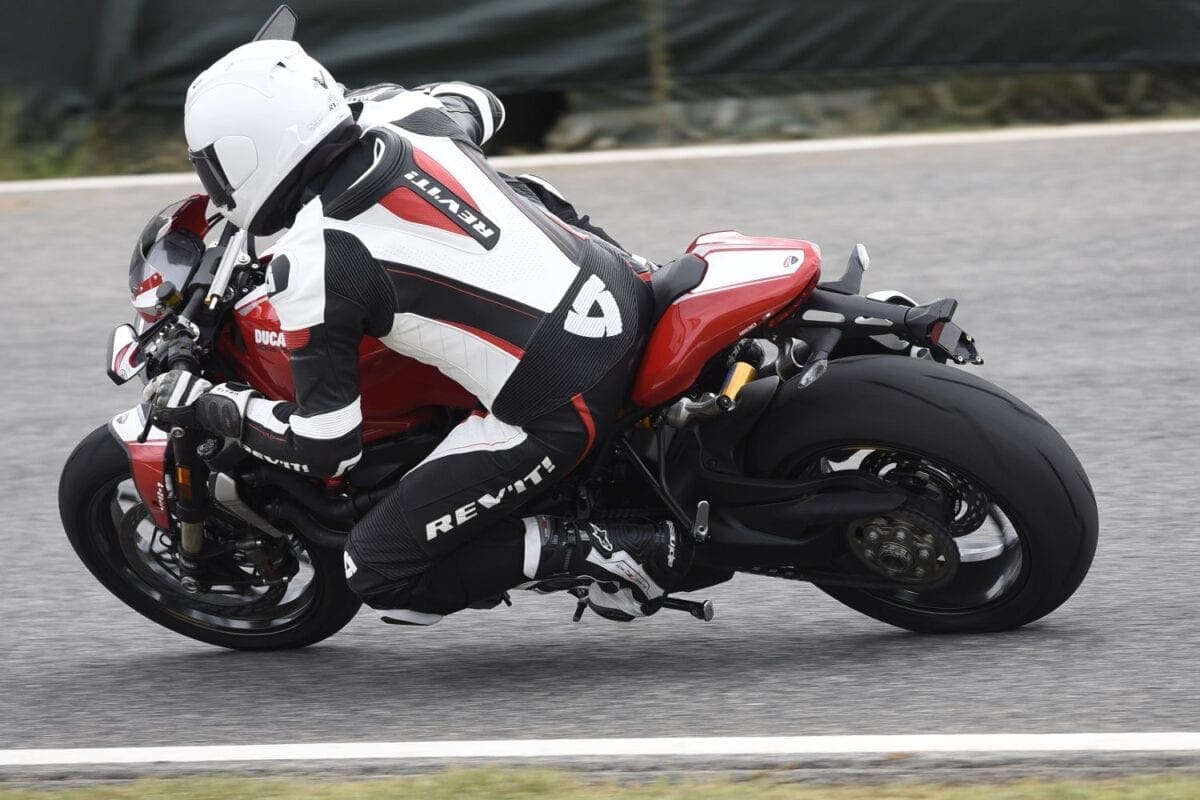 The farther I rode, the more I got to gauge its crisp fuelling and relentless drive, which far surpassed the efforts of the other 1200s; unlike the others, failing to feel asthmatic above 7000rpm. Driving out of corners, the Monster’s Thin Film Transistor (TFT) dash glowed progressively redder as the engine neared its peak output of 9,250rpm, following which point you’ve still got another 1000 revs to play with, prompting me to step through into the next gear and indulge in more speed. Whilst it’s not possible to knock the actual gear changing process itself, because the Monster’s gearbox proved silky smooth up and down the 6-speed ‘box, most journalists felt the bike should have come fitted with a quickshifter as standard, which wasn’t the case. On a more positive note, the addition of a gear position indicator on the TFT display helped massively on the first few track sessions, especially when trying to tie up the right gear for the enormous circuit’s multitude of bends. Getting the right gear for the straights was far easier, and offered the perfect chance to absorb the beauty of the reworked motor, which just seemed to keep on pulling throughout the rev range. In the same respect as the 1199 did to the 1198 it superseded, the R’s engine felt more revvy than its predecessors and proved much more manageable, too. Drivability out of slower corners was still plentiful, but rolling on and off the throttle in bends didn’t encourage the typical jerky sensation you’d expect from a big twin.

Ascari’s third and fourth corners are very fast and it’s essential that you flow from one apex to the next, before powering off down a mini straight. Excessive wallowing had made this challenge hard work previously, with the bike feeling hard to turn and the front end feeling vague. With Allesandro’s changes to hand, that was no longer the case. In fact, the whole track felt significantly better to ride, giving me more confidence when pitching in, apexing and driving out of corners. The stability of the bike improved dramatically, both through the bends and on the straights, and the feel of what was going on beneath me also stepped up. Grip was always plentiful, no matter how aggressive I got with the throttle, and the agility of the Monster also impressed me. In equipping the bike with the Panigale’s wheels, Ducati had also increased the Monster’s rear tyre radius from 190 to a 200-profile. The rear tyre is quite simply massive, but it never seemed to impede on the riding experience. The bike’s fitted with Pirelli Supercorsas and their radiuses are careful crafted to compliment both turning speeds and adhesion levels. Getting from vertical to full lean, and being hard on the gas, was an effortless task. 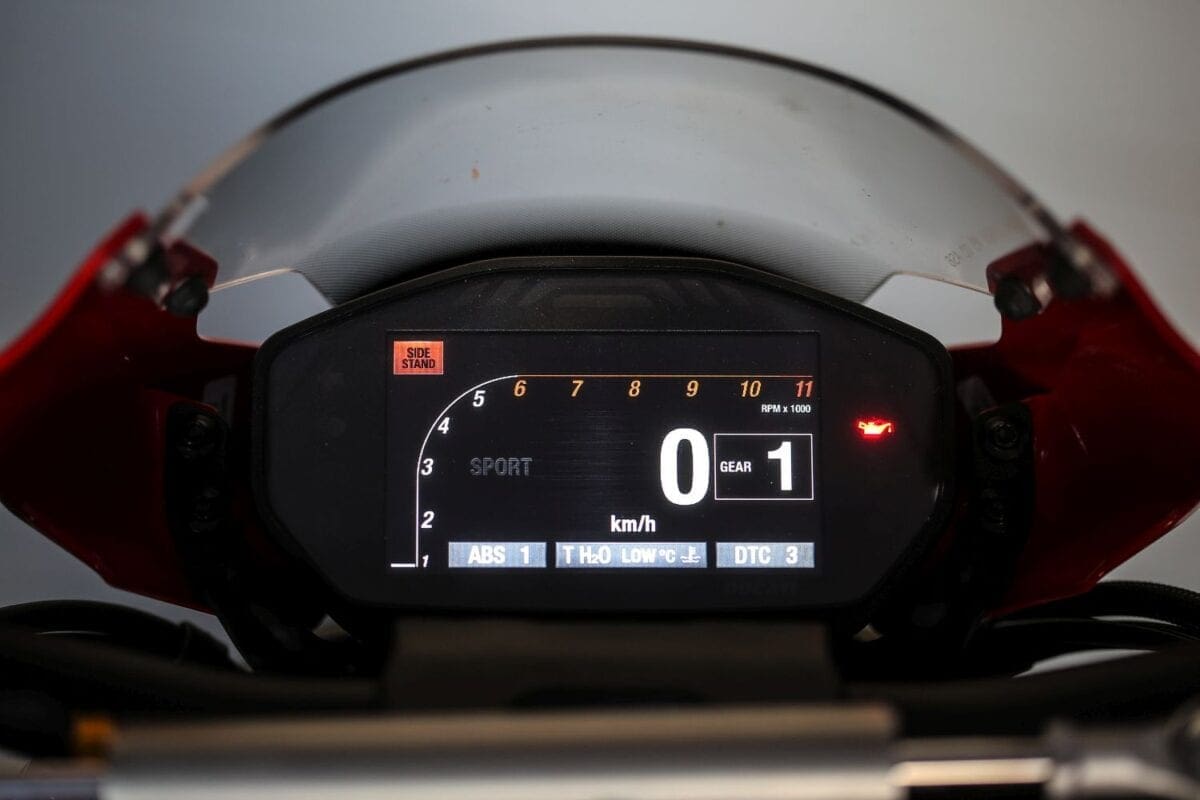 One problem which wasn’t so easy to get rid of was ground clearance. Despite being massively more generous than its siblings, it still proved quite easy to deck out the side stand, footpegs and exhaust valve on the R. Moving my weight off of the bike into corners did help, but it wasn’t a magic fix; several bikes sustained bent gear selectors and brake pedals. The increase in the suspension unit length had undoubtedly proved beneficial, and it’s unlikely that most people would sustain such problems when riding the bike on public roads, but on track it did feel as though the potential of the bike’s lean angle was certainly hindered on a far too regular basis.

Ultimately, if someone wanted an out-and-out sportsbike, they’d buy themselves a Panigale. The Monster 1200R is not that focused a motorcycle, which is actually one of its key advantages. In producing the R, Ducati has essentially increased the versatility of the Monster, but it’s still very much a street bike. Although we didn’t get chance to try this it out on the roads, there’s not a part of me that would question its competence as an everyday motorcycle, especially so because it has retained the same handlebar and seat height as found on the tried and tested standard and S-model Monsters. The fact in can now earnestly tackle race tracks, too, is nothing but a huge bonus and will undoubtedly influence sales of the model when it reaches dealerships in January of 2016. That is supposing you can get over the £15k-plus price tag. As naked bikes go, the R is a very expensive motorcycle with the ‘Ducati Red’ version coming in at £15,250 – over £4000 more expensive than the base model 1200. The model’s also available in ‘Thrilling Black’, but that will set you back a couple of hundred pounds more (£15,450). On that note, you best get saving. 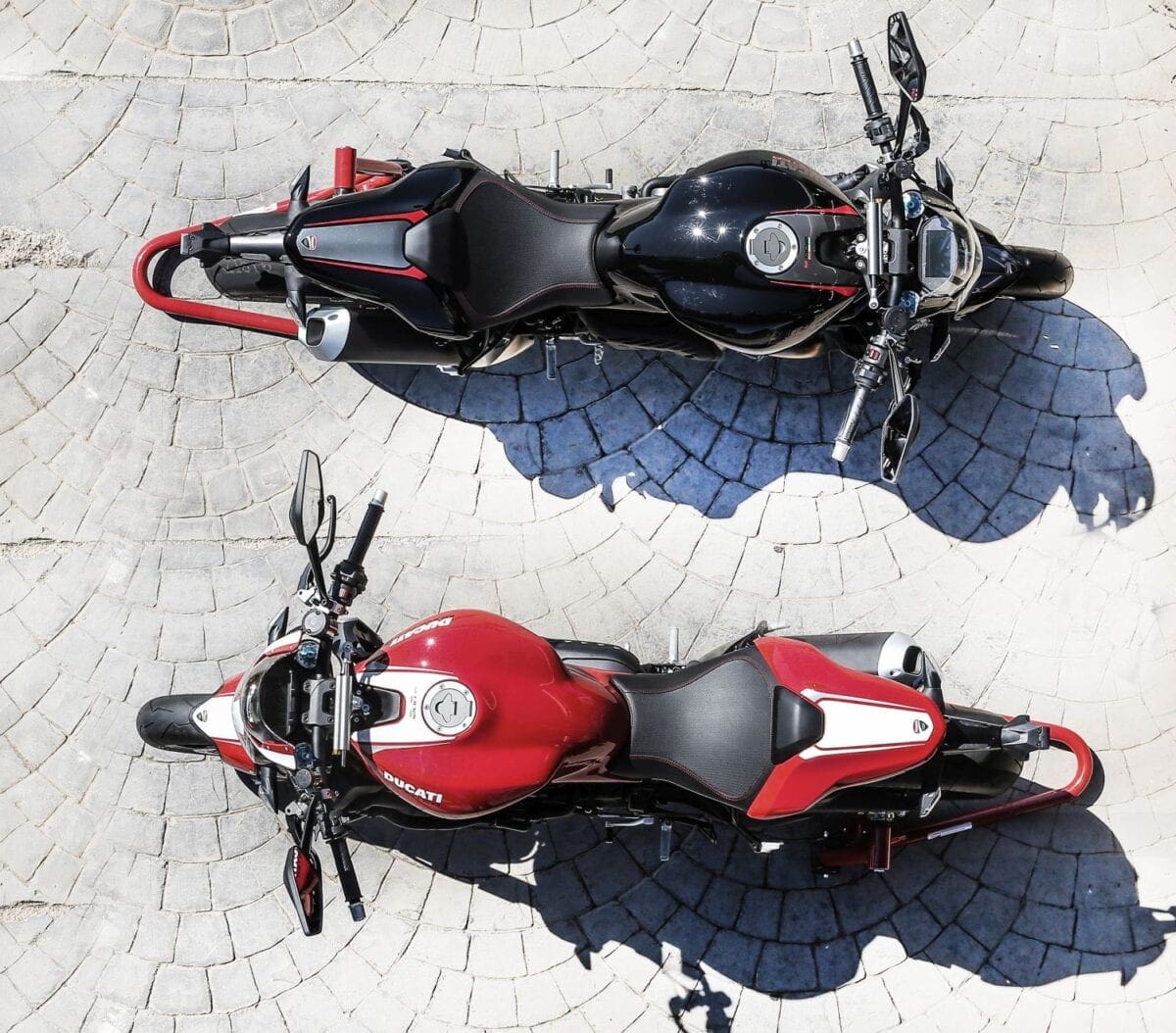