Road-rage woman who hit biker with car, physically attacked him and then drove off spared jail 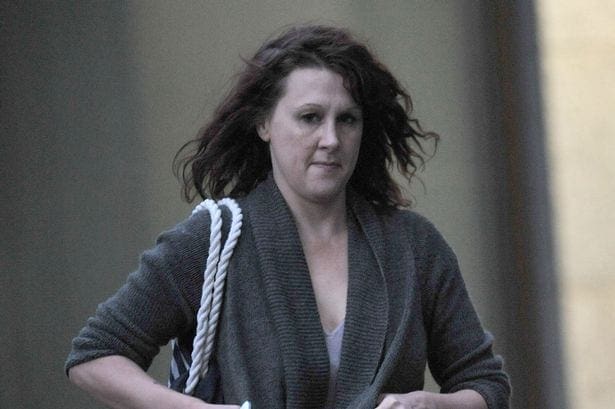 Leah Keyworth who ran into the back of a motorcyclist after he admonished her for driving whilst using a mobile phone. Picture: Manchester Evening News

A 42-year old woman who was on the phone whilst driving, rowed with a motorcyclist who admonished her actions when the pair were stopped at a red light then later on ran into the back of the motorcyclist so hard that his bike and helmet were written off – has escaped jail.

Leah Keyworth, 42, from Kilcoby Avenue, Swinton, ran her car into the back of the biker who had a ‘verbal’ with her when he spotted her using her mobile phone whilst behind the wheel.

Manchester and Salford Magistrate’s Court heard that that the mum-of-three pleaded guilty to driving without due care and attention, assault, criminal damage and failing to stop after an accident and also failing to report an accident.

Reported in the Manchester Evening News, Subhanur Chowdhury, prosecuting, told the court that Keyworth had become abusive after having a ‘verbal’ with the biker after he remonstrated with her about being on her phone.

Chowdhury said: “They were at a red light and he saw she was on her phone. They had a verbal and she became abusive. He carried on down Manchester Road towards Bolton and he said that she was following him very closely behind so he rode away. He then approached a pedestrian crossing and stopped. She was unable to and collided with him.

“He stepped off his bike and she got out of the car. She pushed him in the chest and then he took off his helmet and placed it on his seat. She then slapped him in the face and knocked his helmet off into the road, before driving away.”

Defending, Robert Travis said that his client had been in an abusive relationship and that this was the reason she had reacted the way she had. Travis alleged that the motorcyclist must have said something to Keyworth that was key to her reaction the way she did.

Travis said: “When she was interviewed by the police she apologised and accepts what she did. He was a large framed individual who was riding a bike and took off his helmet and how she has suffered for many years may have caused her to feel like that again.”

In addition to the suspended 12-week prison sentence, Keyworth, who had her young daughter in the car whilst she pursued the motorcyclist before driving into him at pace before slapping the rider and then driving off, was ordered to pay £1,290 in fines and compensation and had 10 points put on her licence.

The sentence doesn’t seem particularly right for someone who thinks that hitting a biker with a couple of tonnes of car so hard that his bike is written off is the right way to react having been caught on the phone whilst driving, does it? Tell us what you think.

Road-rage woman who hit biker with car, physically attacked him and then drove off spared jail