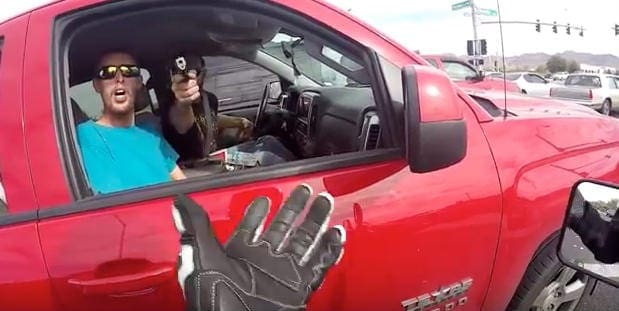 Top US website The Blaze has posted this article in which they report that a biker says he is “thankful to be alive” after he found himself staring down the barrel of a gun during a road rage incident caught on camera.

In a video uploaded to YouTube on Saturday, the biker says he was on his way to ride off-road trails with nine other bikers, when a group of men in a red truck with Texas license plates noticed one of the bikers get in the dirt along the side of the road.

“The guy … didn’t like what he’d seen apparently and started flipping the bird and trying to get a reaction from everyone in the group,” the biker wrote in the YouTube video description. “I went to ask why they are flipping me and everyone off and this is what resulted of that.”

The driver of the truck and his passengers are then heard shouting profanities toward the biker.

“Get that goddamn gun out,” one passenger is heard yelling.

The driver of the truck is then seen aiming a gun while telling the biker and his gang to “get the f*** out of my goddamn face.”

The exchange happened as the bikers and those in the truck were sitting at a stoplight. Moments later, the light turned green and they were all off. The video does not show the gun being fired.