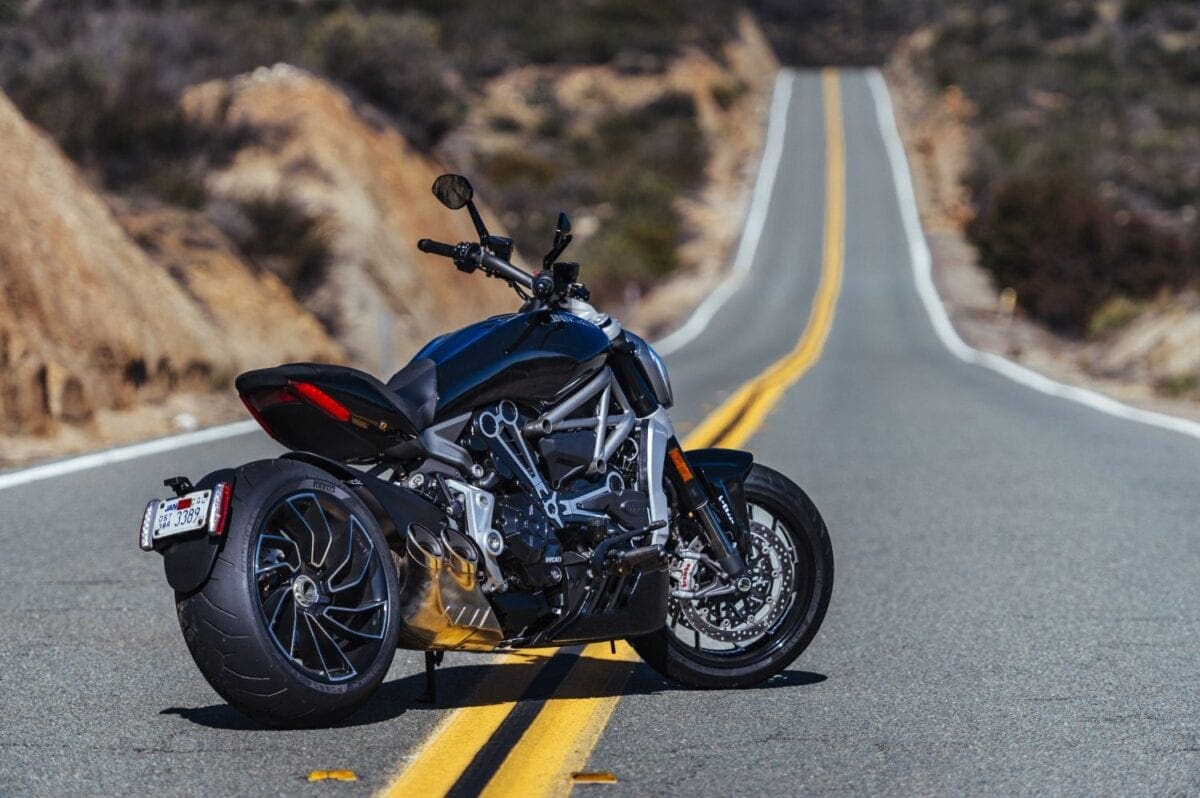 I find it hard to call this bike a cruiser. It’s not particularly heavy, it’s full of extremely advanced technology, it handles, and it’s very, very fast. But it does have the cruiser trademark feet-forward riding position and wide, raked-back handlebars. The closest thing to this, besides the original Diavel, is Harley’s V-Rod and Yamaha’s VMAX.

This is not simply a rehash of the original Diavel; the only shared components are the tyres and the brakes – everything else is new, including the Multistrada-derived 1262cc Desmodromic motor with variable valve timing. Based on the adventure bike’s design, the engine gets a longer stroke for a 63.6cc increase in capacity, along with a reprogrammed version of the oil-controlled variable inlet and exhaust valve timing.

Meeting the more stringent Euro 4 emissions regulations, the XDiavel produces less power and torque than the Diavel – 154bhp @ 9500rpm compared to 160bhp @ 9250rpm. It also produces slightly less torque – 95lb-ft compared to 96.3lb-ft – but true to the expectations of a less sports-orientated bike, it makes it 3000rpm earlier, at 5000rpm… at 2100rpm it’s already making 72lb-ft – almost 1000rpm earlier than the Diavel.

This is an incredibly striking looking machine, and more elegant than the Diavel. Flowing lines from the stubby tail, through the 18 litre teardrop tank and onto the LED headlight give the impression of a muscular motorcycle. The engine is a major part of the design (as well as a stressed member of the trellis frame), and while it’s still got a few covers to hide the cabling, the plumbing on the left of the bike is reduced, thanks to the repositioning of the water pump to between the two cylinders, allowing the designers to run the water channels inside the engine.

The most obvious differences between the standard XDiavel, at £15,795 and the S model, at £18,395, are the gloss paint on the more expensive bike, machined belt covers and frame plates, and machined wheels. The swingarm of the S model is also brushed aluminium, as opposed to the black paint of the base model.

As you’d expect, the parts and finish are of a very high quality – I particularly like the red-illuminated switchgear, and the ease with which all the buttons can be operated. I know some complained of difficulty with the indicator switch, but I had no problems at all.

What did surprise me were a few – albeit very minor – rough edges on a machine otherwise so beautiful. Most notable was some slightly conspicuous welding at the front of the tank, where it’s recessed for the 50mm forks at full lock, along with the step on the bars as they go from stylishly fat to a standard 22mm for the controls. They’re only things you’d notice when cleaning the bike, and certainly don’t spoil the overall impression of what is a very imposing machine.

The big, wide tank looks great from the saddle, and while it’s a machine bristling with electronics, and you’re looking at a small, low-set TFT dash, the clean lines when on board give a wonderful open view of the road, and an impression of simplicity that promises not to interfere with your enjoyment. 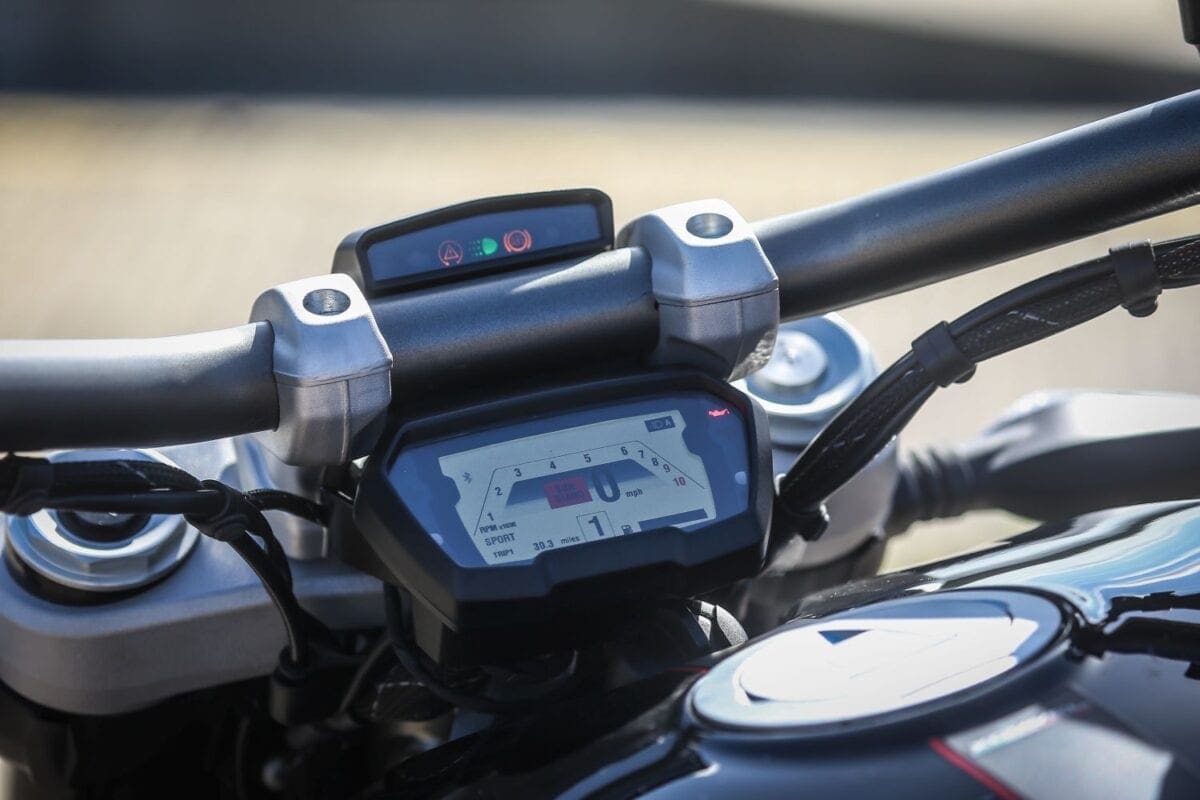 And it doesn’t – the tech is well balanced, and very easy to set up to suit yourself. If you want to be able to lock the rear wheel you can (though you’ll also disable the cornering ABS). If you like the idea of the front wheel coming up occasionally, Ducati won’t stop you. From the first time you pull away, it’s clear the ride-by-wire system is well implemented, giving a very direct feel to the throttle; the only time I became aware of the brains inside was when accelerating on a dusty track – the rear briefly slipped, then the engine immediately restricted itself, giving a noticeable, but very brief lag in power.

As with all the safety features, including cornering ABS and traction control, the level of interaction can be tailored for each of the three riding modes (Sport, Touring and Urban), and saved in the memory. This means no faffing every time you turn the bike on, but if you change your mind, you can return it to the defaults. 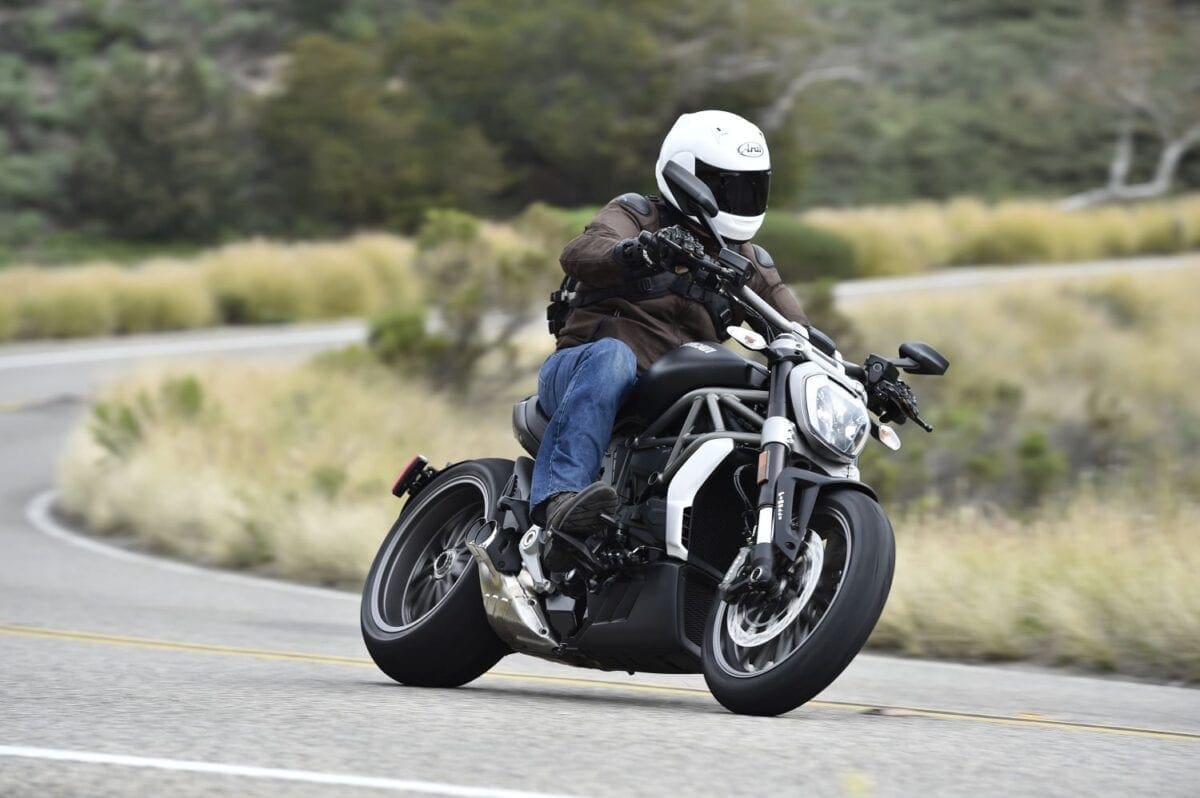 While a great deal of torque is available as low as 2000rpm, the engine has a characterful lumpiness to it, becoming much smoother above 3-4000rpm. I spent most of my time in third gear on the sweeping roads of the launch route running beside the Mexican border. As speeds picked up, I’d stray into fourth, but even up to 70mph I rarely went higher. I did try sitting lazily in sixth, but the engine’s happier at 80-90mph and above in top, getting a little ‘chuggy’ if the speed drops, and causing the bike to want to roll wide in corners if you’re too lazy – that’s normal for any bike of course, but it’s easy to forget your speed with such laid-back ergonomics.

It’s this eagerness to rev that sits awkwardly with the cruiser image for me. Approach the machine like you would a typical Harley and you might find yourself wanting something a little more sedate. But that’s not the audience Ducati is targeting, and realistically, how could a company with such racing heritage make anything that doesn’t have such potential?

Of course, you can very easily potter around on the XDiavel, and the hugely comfortable seat – one of the very few that I can ride all day without an aching bum – makes it a pleasant place to be. But it’s hard to ignore the engine grumbling away at you to just give it a little bit more. It knows its bloodline.

As we weaved our way through the San Diego city traffic at the start of the test, the first time I got the opportunity to rev the bike through 5000rpm I was shocked – my body position said I was on a cruiser, but the sudden surge screamed top-end Ducati Monster. Once used to it, and on the open road, it’s easier to play with the power – in fact, while it can surge ahead incredibly quickly, it’s surprisingly easy to ride as the revs keep building.

It might make a little less torque than the original Diavel, but despite actually dipping slightly after its peak at 5000rpm, then returning at 7500rpm, it’s only at just under 6500rpm that the older machine catches up with the new. It’s an intoxicating delivery, and over the 160mile route, I can’t think of a single moment that I wasn’t grinning wildly, and relishing the confidence that Bosch cornering ABS and traction control give on something so bonkers. 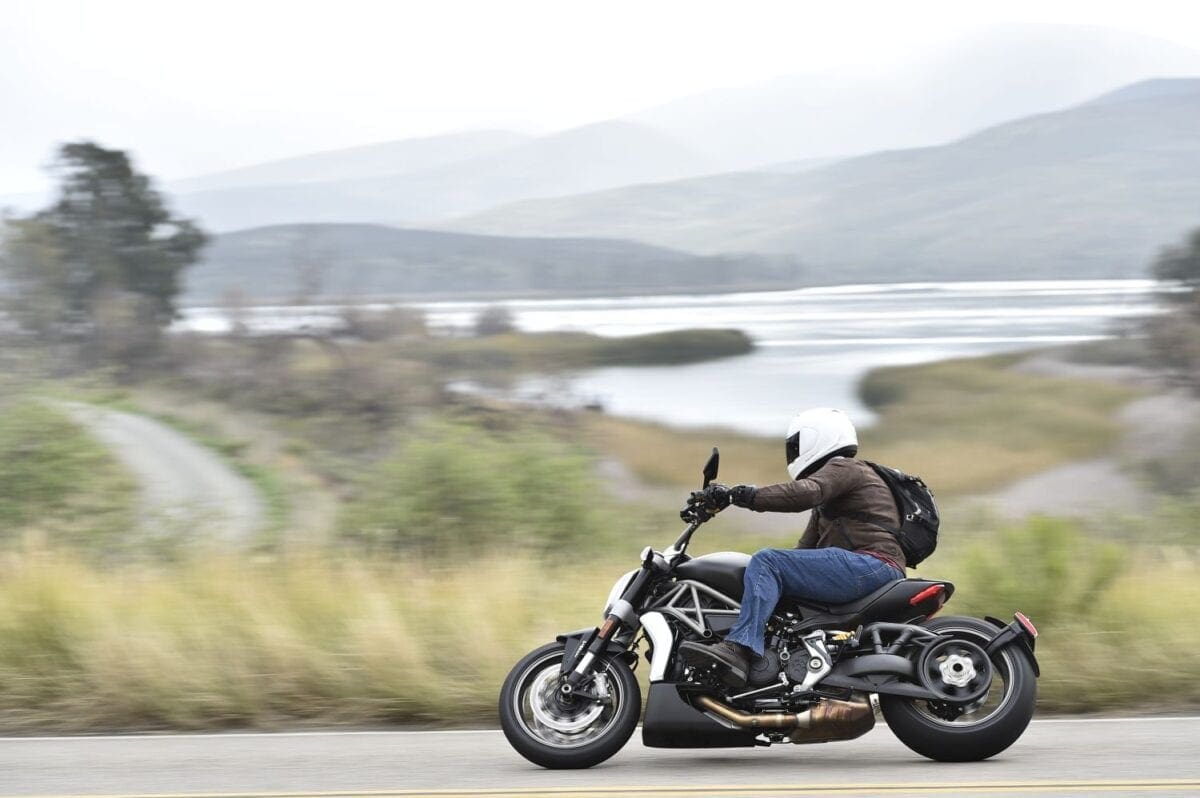 It’s in the corners that the XDiavel really throws any of the cruiser preconceptions out of the window – with a 40° lean angle (just one degree less than the Diavel), you can chuck this bike into corners with confidence. While our test route was more sweeping than switchback, there were enough bends to find out that you had to try really hard to scrape the short hero blobs on the folding pegs. One 45mph corner had me deliberately squaring it off to see how far I could lean – when the peg did touch down it was without any drama, just a gentle scrape and an unflappable feeling of stability.

Though the steering has a shallower rake, and the wheelbase is longer than the Diavel, the new machine still has no problem changing direction – it won’t flick from side to side like a Panigale, but it never ceased to impress in the S-bends we rode. 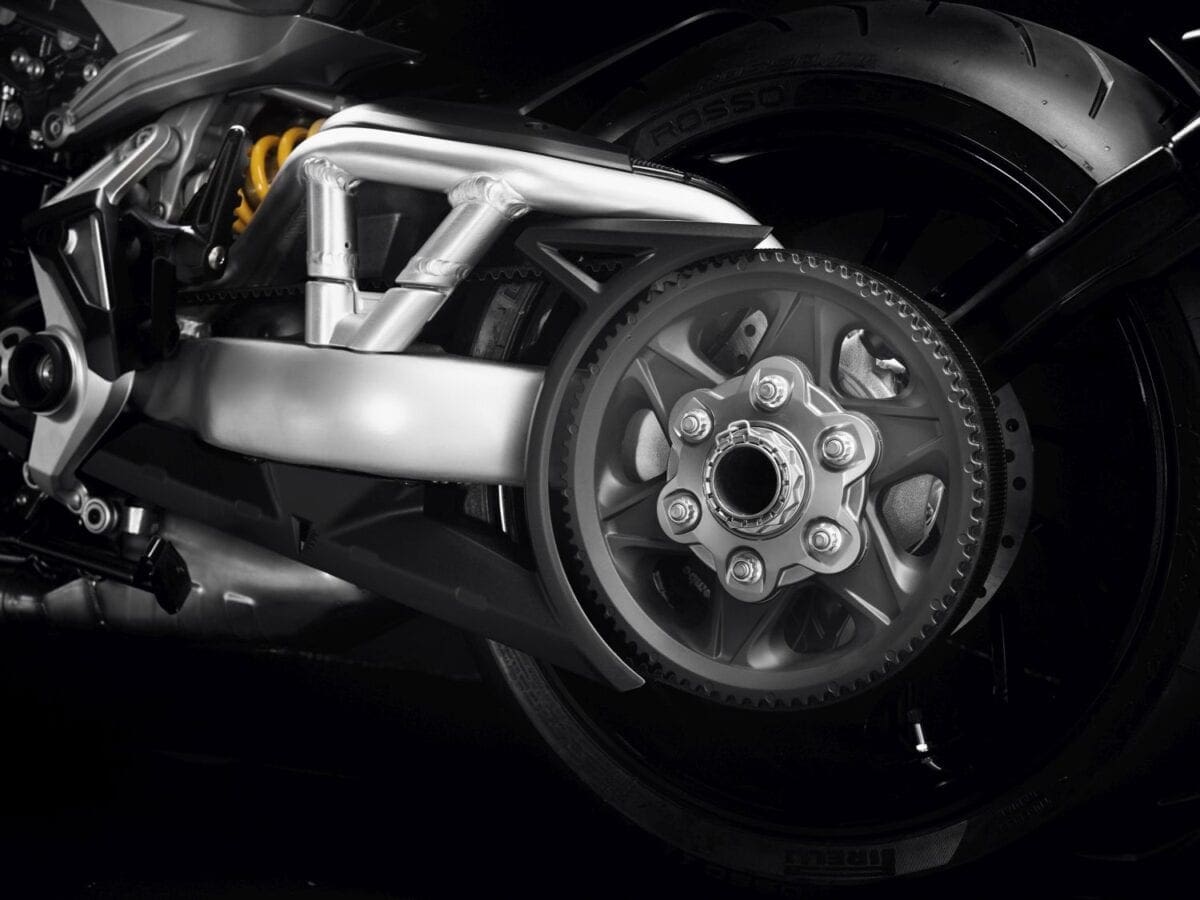 The XDiavel is impressively comfortable for a bike of such extremes, but that superb handling – even on a 240-section rear tyre – comes at the cost of fairly firm suspension. On a feet-forward bike any harshness is always going to be more pronounced, so it’s actually surprisingly well controlled; I only remember one pothole that caused me to yelp as my back took the impact.

Long distance clearly isn’t a problem, though you’d be daft to spend it all on motorways with such an exposed riding position. What is more of an issue is the provision for a passenger. Both models come with the standard – and incredibly small – pillion seat, as well as a longer ‘comfort’ version, and a small backrest. If you’re taking a passenger, I’d suggest fitting this is essential – I can honestly say that without the backrest, I wouldn’t want to be on the back of the XDiavel – the chance of slipping off, onto the rear wheel is all too possible. With the larger seat and backrest fitted it feels a lot more secure, but only the shortest legged of passengers will want to spend very long there.

One American journalist complained it was too quiet: “With all these bikes together, it should sound like thunder as we roll in. Harley riders would laugh at it.” I’m not that bothered about loud exhausts – what matters to me is that it sounds good when I’m sat there riding. And in that respect the XDiavel really does deliver. I’d rather relish the aggressive mechanical growl of the motor as I change down to power though a set of bends, than have a booming exhaust that alerts everyone to the fact I’m not hanging about.

If I had the money for either, I’d probably buy the base model – I prefer the matt black styling, and while the S’s wheels are lovely, it’s only the distinctive Daytime Running Light of the S that I’d miss. Sadly it’s not a simple job of just swapping the lights – Project Manager Stefano Tarabusi told me that besides the fact that the S model’s DRL lamp is hugely complex and expensive, the software that controls it is different in the two models.

Ducati is running an ad campaign of ‘The gentleman and the bastard’. It’s true that this is a split-personality bike, with the lazy cruiser character and Ducati sport aggression, but if anything I’d say it’s one of the most single-minded machines I’ve ridden in a long time. It’s not trying to merge commuting and touring, or road and trail; its one purpose is to make you love every ride. It’s built for fun, pure and simple, and in that respect, Ducati has been utterly successful. 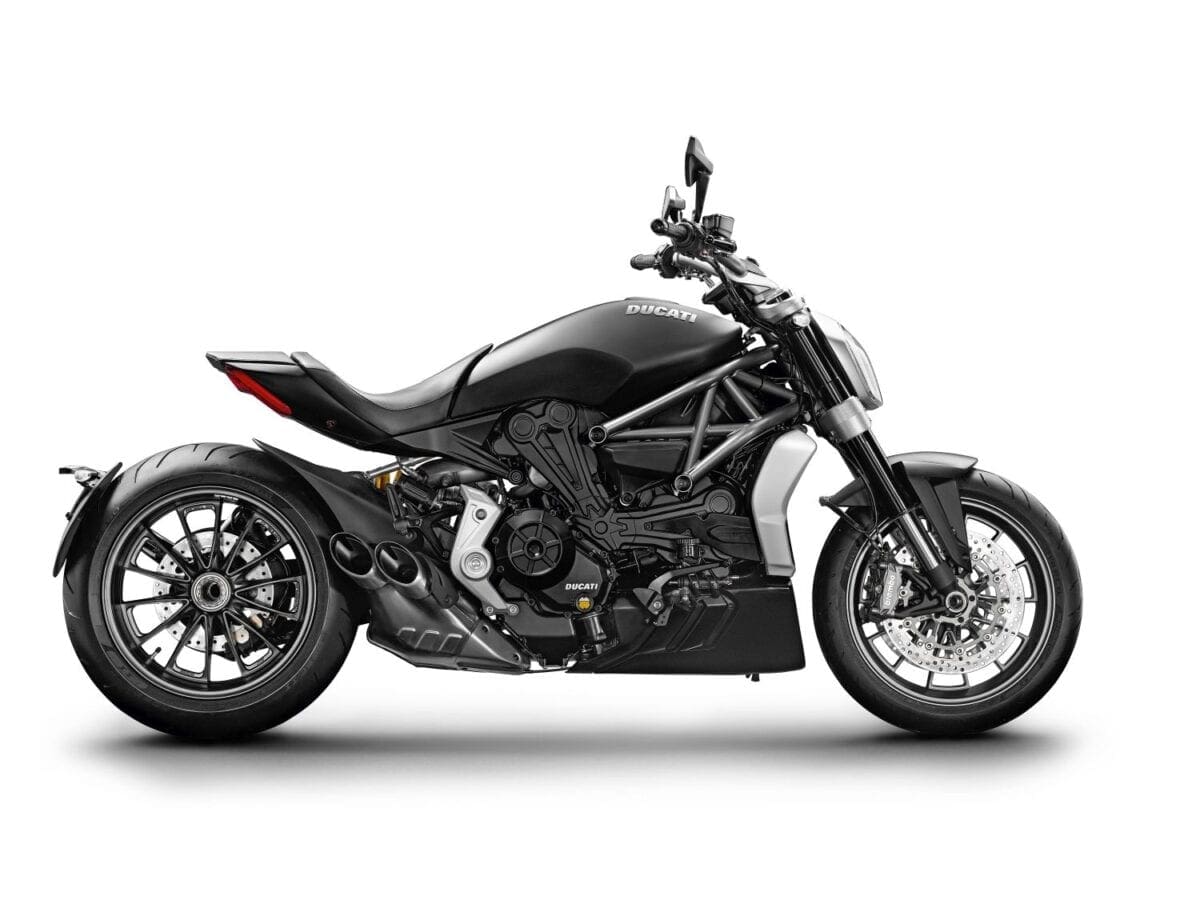 This is the XDiavel 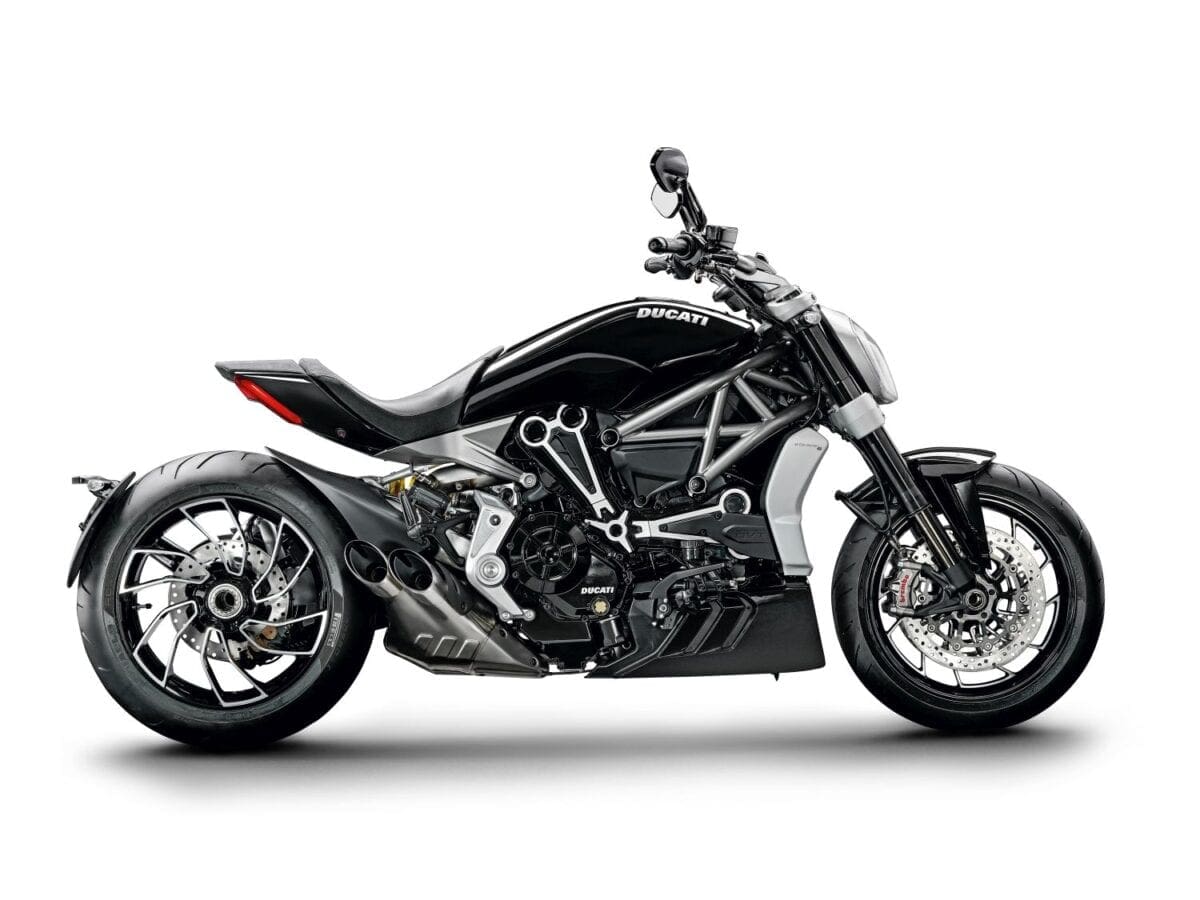 This is the XDiavel S