Ducati hit gold when it introduced the 800cc Scrambler in 2014. For Ducati, the Scrambler range is a fun, easy and accessible entry point into an exclusive brand, better known for serious performance bikes. Its appeal reaches far beyond the realms of traditional ‘Ducatisti’, and most importantly, it has proved to be hugely popular. Last year the Italian manufacturer sold more than 16,000 Scramblers, earning the spirited V-twin a place in the top 10 best-selling bikes over 500cc.

Unsurprisingly, in the face of this success, Ducati is keen to extend the Scrambler range beyond the 800cc machines to appeal to a wider audience. Cue the latest member of the Scrambler family, the new Scrambler Sixty2. The new offering is a 400cc, A2 licence-friendly bike, designed to be easy to handle, and priced competitively enough for it to have a chance to follow the sales trend set by the original models.

The Scrambler Sixty2 is very much a back-to-basics kind of bike. It has the retro look and feel that invite you to just jump on and ride, while still benefiting from the latest technology such as ABS brakes and low emissions to make it Euro 4-compliant. On the face of it though, there’s very little gadgetry to deal with: no traction control or switchable ABS (it’s on as standard), no ride modes or heated grips. And for this bike, the lack of all those things feels right. You can just throw your leg over it and go. The technology is built in but hidden under the timeless looks.

The simplistic approach continues with the digital dash that features a speedo, an upside down rev counter running around the bottom half of the round dash, and selectable trips and temperature display. Surrounding the digital display are the usual suspects: lights for ABS, oil, indicators, full beam, engine, fuel and neutral. The only other thing that I would have liked to see on the dash was a gear selection indicator.

As you’d expect in the absence of complicated rider-adjustable technology, the switchgear is basic and straightforward. Start and engine kill switch on the right, indicators and horn on the left. The only one that I managed to activate by accident was the full beam switch, which I caught a couple of times with my index finger as I reached for the clutch. It’s no biggie though; you see the blue light on the dash soon enough to realise what’s happened. 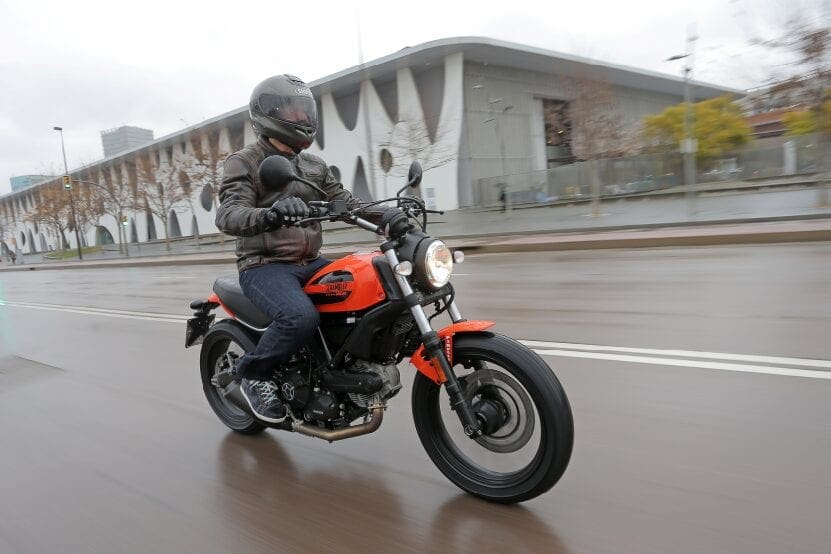 Cruising in the city

Sitting on the bike, the first thing I noticed was how instantly comfortable it felt. The riding position has been cloned from the 800cc Scrambler Icon, with wide, slightly raised handlebars, a long plush seat and foot pegs low enough to allow comfortable leg placement. The width of the handlebars helps with confidence and stability. Filtering through the queues of near-stationary cars in Barcelona was delightfully simple – even with the impatient Spanish drivers trying every trick in the book to invade every inch of your space, whenever possible. The low seat means that if you need to put your foot down it’s easily done. It also helps that the bike is in its element at crawling speed; balancing the throttle, clutch and back brake is very easy, enabling you to inch your way through the traffic slowly and steadily.

The Sixty2 feels more substantial than its 400cc specification might suggest. This is for a good reason: the chassis is largely based on what the Ducati engineers call its ‘big sister’, the original 800cc Scrambler. Using components from existing bikes makes a lot of sense and most bike manufacturers do this to shorten the development cycles, keep costs reasonable and – let’s be honest – to stop themselves reinventing the wheel every time a new bike rolls off the production line. The Sixty2 shares around 60% of its components with the bigger machine, including the frame, which make it feel more like a ‘big bike’ than a beginner machine.

There are, of course, clear differences between the Sixty2 and the full-fat Scrambler, most notably the displacement, but other elements have been modified too, such as the suspension, which has been softened to appeal to less experienced riders and to make riding in cities more comfortable. Our test ride was concentrated in the city with a short loop on the hills around Barcelona. On the busy city streets and when cornering at up to 50mph, the suspension worked well.

It’s worth noting that the front suspension is not adjustable, but the rear shock spring-load is, which might come in handy on faster roads, at least for larger riders.

The brakes performed well on the wet roads and the ABS dutifully ruined my attempts to lock the back wheel for more than the briefest of moments. There is only one brake disk at the front but the braking power it provided was perfectly adequate when I had to bring the bike to a sudden stop at city speeds. 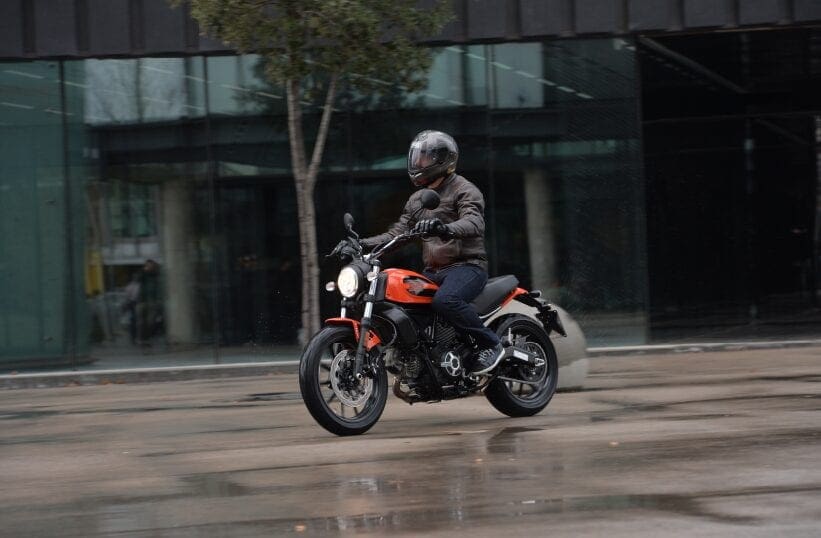 The Sixty2 is powered by an air-cooled 399cc V-twin (or L-twin as Ducati prefers to call it) engine. Like many other parts of the bike, the engine has been derived from the one on the 800cc Scrambler Icon, but optimised for lower displacement. It has a 72mm bore and a 49mm stroke.

To appeal to riders who want an easy-to-ride, accessible bike, the twin engine has been designed to provide smooth power and fluid acceleration, delivering a claimed 40.4bhp at 8,750rpm and a torque figure of 34.3Nm at 7,750rpm. On the streets of Barcelona the power delivery certainly felt smooth and the engine has enough fire in its belly to accelerate hard enough to keep ahead of the traffic. Since it’s ‘only’ a 400cc bike, the power supply is not endless and you need to be in the right gear to make the bike move swiftly. Although the engine will accelerate from lower revs, it starts to properly pull from around the 5,000rpm mark. The bike is quite happy to gallop towards the redline just below 10,000rpm (at which point two red lights start to flash on the dash as the limiter does its job).

There is a slight jolt as you open and close the throttle, which makes the bike a little jerky if you are on and off the throttle a lot. It’s not a problem once you know what to expect, and you can get around it by feathering the clutch, but it does require more work than I had anticipated. Having said that, the engine, clutch and gears work well together overall, and the Sixty2 is very pleasant and carefree when it comes to the controls.

The air-cooled engine and the head pipes have been designed to prevent the heat from the machine hitting the rider full-on by routing the pipe from the rear cylinder under the seat to join the single muffler. Despite this, there is still a fair amount of heat pumping out. I could feel it more on my left leg, possibly because the cambelt cover on the right acts as a bit of a shield between man and machine. I wasn’t too bothered by the heat, but I can imagine that on a hot day riding in the city, things could get quite heated. 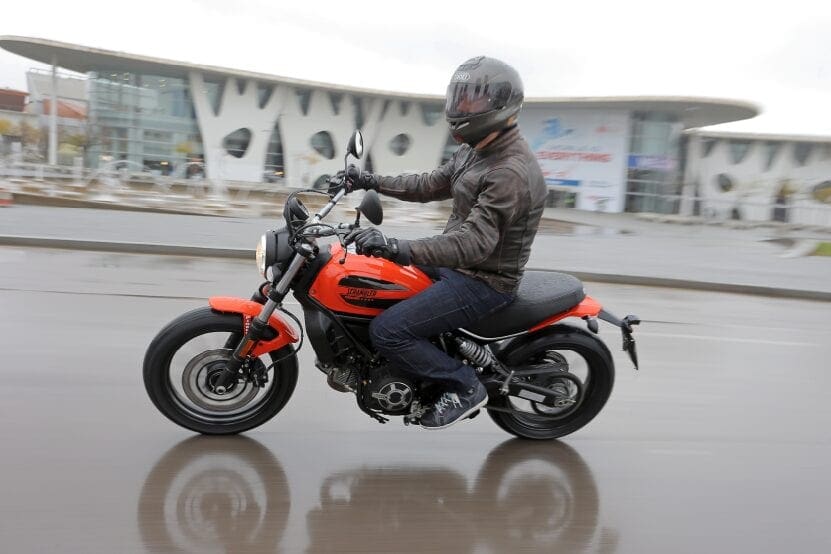 Ducati has put a lot of effort into producing a bike that balances the prestige of the brand with its accessibility to new customers. The Scrambler Sixty2 is about as cheap a bike as Ducati will ever produce, which should help with sales. Crucially, it’s also A2 licence-friendly, making it something of a rarity in that licence category as most new retro machines from the major manufacturers all require a full licence. With the Euro 4 regulations making it difficult to offer restriction kits for bigger bikes, the Sixty2 is cornering the A2 licence market quite nicely. At £6,450 it’s still a pricey machine – only £800 less than the cheapest big Ducati Scrambler. But it’s a proper Ducati, and it’s a fun and capable bike for commuting or city cruising. The Sixty2 is available at Ducati dealers now, and with the proven sales record of its big sister, expect to see plenty of these on the roads this summer.