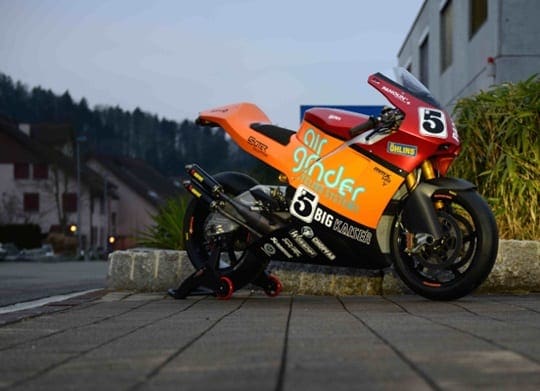 Suter Racing has confirmed that Ian Lougher will race the Suter MMX 500 at the 2016 Isle of Man TT Races.

Lougher’s two-stroke credentials include being the only rider to win five consecutive North-West 200 125cc titles and numerous Southern 100 wins. He took his first TT victory in the 1990 Lightweight TT in one of the closest races in TT history, winning by only 1.8 seconds from Steve Hislop. Lougher set a new race record and a lap record that wasn’t beaten for nine years.

Lougher enjoyed a nearly 30 year-long TT career between 1984 and 2013 which included ten race wins and a record 126 starts and the most replicas awarded to a TT rider, before retiring after the 2013 Senior TT.

The 53-year old continued to race on the TT Mountain Course in the Classic TT, which included wins in the 2014 Bennetts 500cc Race and the Motorsport Merchandise Formula 2 Classic TT Races. He would have regained his 500cc Classic TT title but for a thirty second pit lane speeding penalty in 2015.

Lougher will be reunited with an old rival from the 1991 250cc European Championship, Eskil Suter, now the CEO of Suter Racing.

Lougher said: “I really warmed to Estil Suter’s approach on this project. Despite the emotions that are undoubtedly attached to something of this nature, Suter Racing is approaching it both objectively and professionally which is the only way to go racing on the TT course.

“We want to learn the MMX 500 in the next three years to tackle the TT step by step before we can be properly competitive and it might seem strange for an old fella to say it but you can always learn something new on the Isle of Man. However, I’m sure the spectators are in for a treat from the word go.”