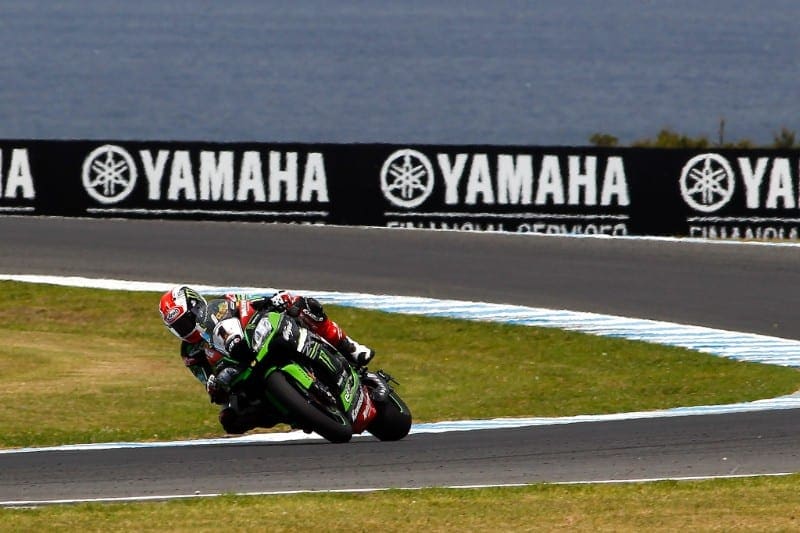 Kawasaki rider Jonathan Rea set the fastest lap of the second and final day of testing in Phillip Island, after teammate and number one rival Tom Sykes had done the same on day one. Rea, who used the morning of the second day to focus on longer runs and race simulations due to doubt about the weather later in the afternoon, posted a best of 1’31.249, one and a half tenths back on Sykes’ fastest of Day 1. With consistently impressive lap times throughout his longer runs, Rea is looking imperious as he tries to defend his crown.

Fastest during the afternoon session was 2014 Champion Sylvain Guintoli, with the Frenchman taking his new YZF R1 to the top of the timesheets and keeping it there, despite an earlier small crash. With defending champion Rea just behind him, it was Yamaha teammate Alex Lowes who then put in the third fastest lap, with the returning Japanese manufacturer therefore achieving two of the three fastest laps of the afternoon.

The rate of attrition remained high on Day 2 in both WorldSBK and WorldSSP, and red flags interrupted track time on several occasions. Crashes for Torres, Hook and Menghi saw the riders transported to the medical center and the red flag deployed. Althea BMW rider Jordi Torres escaped any fractures but injured his elbow; a small surgery is planned for tomorrow in Melbourne. Hook crashed at the Southern Loop and subsequent oil on track caused another red flag, with the Aussie suffering a left shoulder dislocation with greater tubercle fracture, and VFT rider Fabio Menghi then crashed at T11 close to the end of the session. The red flag was deployed once again and WorldSSP delayed slightly as the Italian was airlifted to Alfred Hospital in Melbourne, initially diagnosed at the circuit Medical Center before confirmation then came of an acetabular fracture (pelvis).

After two full days of action in WorldSBK, Tom Sykes’ fastest lap from Day 1 remains the fastest of the test. With one Kawasaki blistering over one lap and one showing more consistency, who will come out on top in Round 1? Find out as the lights go out for the new era of WorldSBK on Saturday at 04:00 GMT, 3pm local time. Follow all the action without getting near a television on WorldSBK.com and on the free LIVE Experience App which you can get at WorldSBK.com.