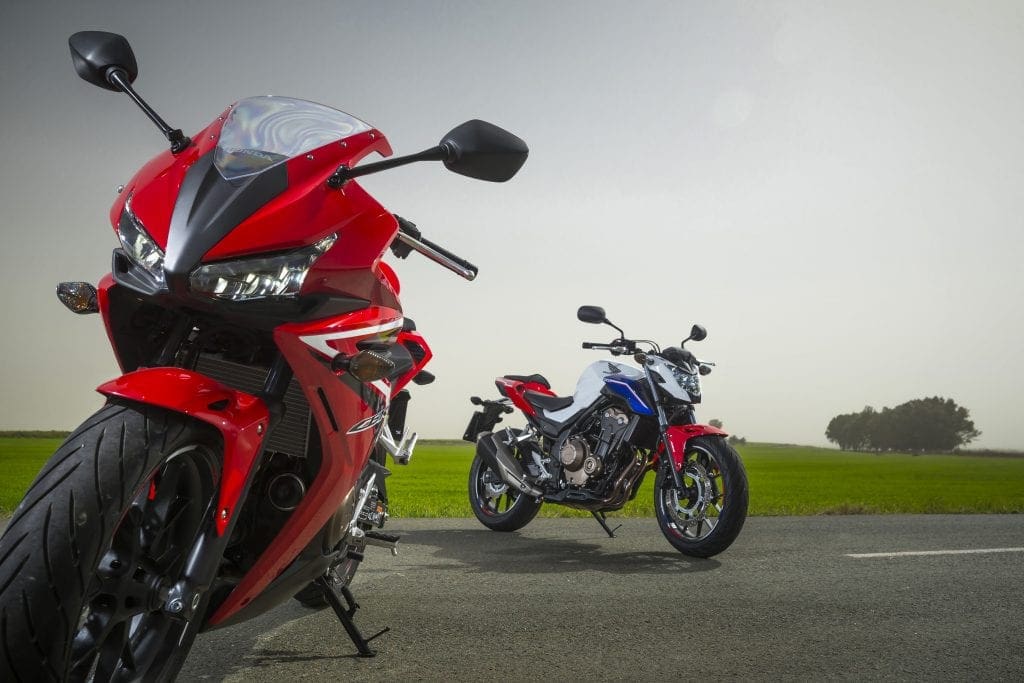 The A2 licence category is a veritable minefield for bike manufacturers in many ways. Any machine that wants to succeed here must be easy for relative novices to ride, sufficiently exciting for veterans to be interested in, and temptingly economical to draw in the commuter crowd. And it won’t hurt if the bike looks good too!

Getting that mix right is no mean feat, and on paper, it would be easy to dismiss any bike that somehow manages to meet all these requirements as a bit of a compromise, or even boring. But Honda has just gone and produced not just one, but two bikes, the CBR500R and the CB500F, that tick all the boxes and offer a healthy dollop of fun factor too.

The two bikes share the same engine and chassis, but have clearly separate identities, looks and – no doubt – fans. The CBR500R has the racing DNA that comes as standard with the moniker. It offers an involved but untaxing ride, with a sporty and comfortable riding position. The CB500F, on the other hand, is a naked bike that is as much at ease in the city as it is in the fast flowing corners.

On the twisty mountain roads outside Seville in Spain they presented an interesting question: which would you rather ride? 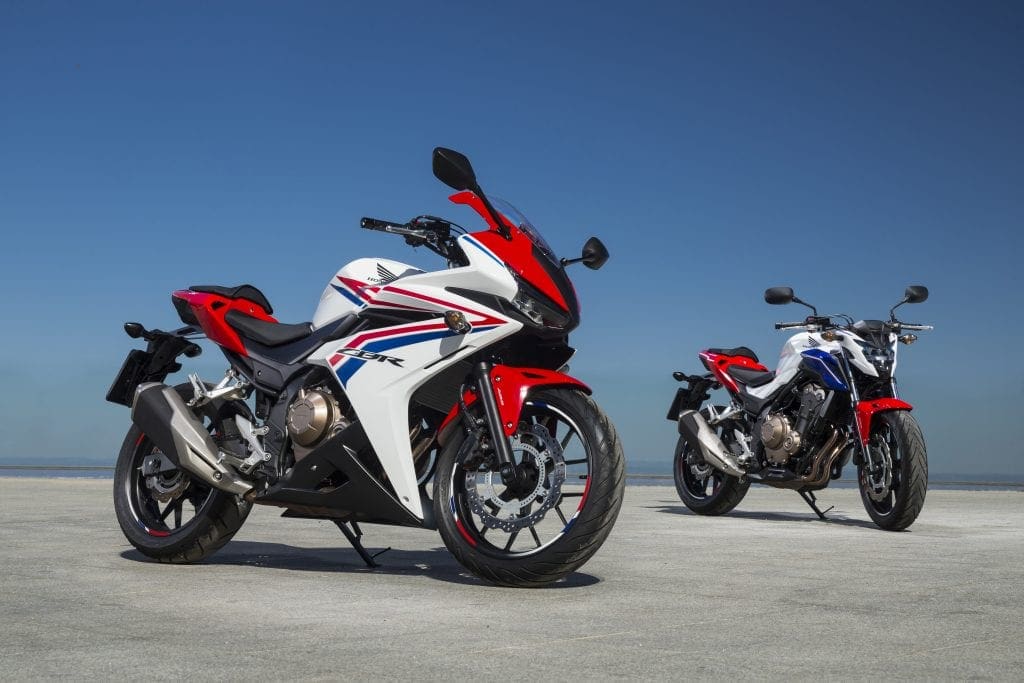 The first noticeable change in the new bikes is the way they look. The design is more angular and aggressive than before, making them look like ‘big’ bikes. The rear section of the bikes is identical, with the upswept tail, separate seats for rider and pillion, air vents in the seat unit, and a new stubby exhaust muffler. At the front, it’s a different story: the CB500F is now more naked than ever, with the last remaining panels protecting the chastity of its engine gone, and the two-cylinder engine now proudly on display. The ‘F’ also has a more compact casing for the single headlight and air vents at the sides of the tank. For the ‘R’ the dress code is more formal, and the full fairing oozes sporty efficiency. The screen angle is sharper than before, the handle bars are low, and the overall impression is very, well, sporty. 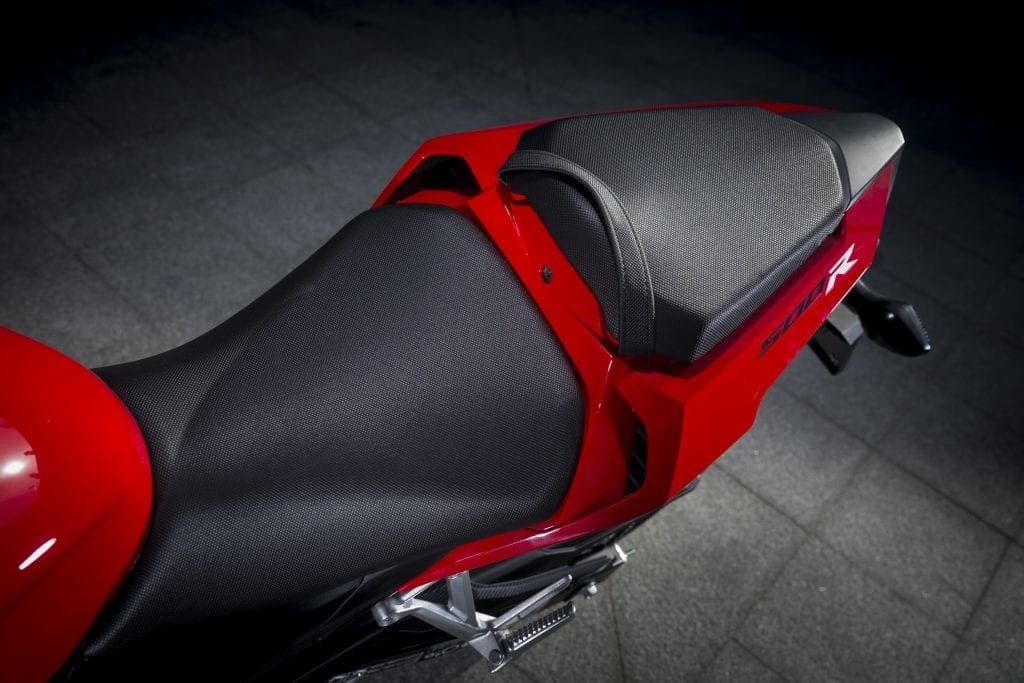 The new exhaust is not only lighter than before, it has also altered the engine note, with the new bikes letting out a full an energetic roar as the revs rise. They are not loud bikes as such, but the noise is pleasing and fits the looks of the bikes well.

The bikes share the digital dash, which houses the speedo, tachometer (with the redline at 8,500), fuel gauge, odometer and clock. There are also switchable trips and fuel consumption indicators. The dash is easy to read on the go, with the large speedo dominating the view. Everything is clearly laid out and while it’s not a particularly striking design feature, it’s clear and stylish. The controls for the switchable options are two pleasantly big buttons either side of the dash, easy to poke at even with gloves on. 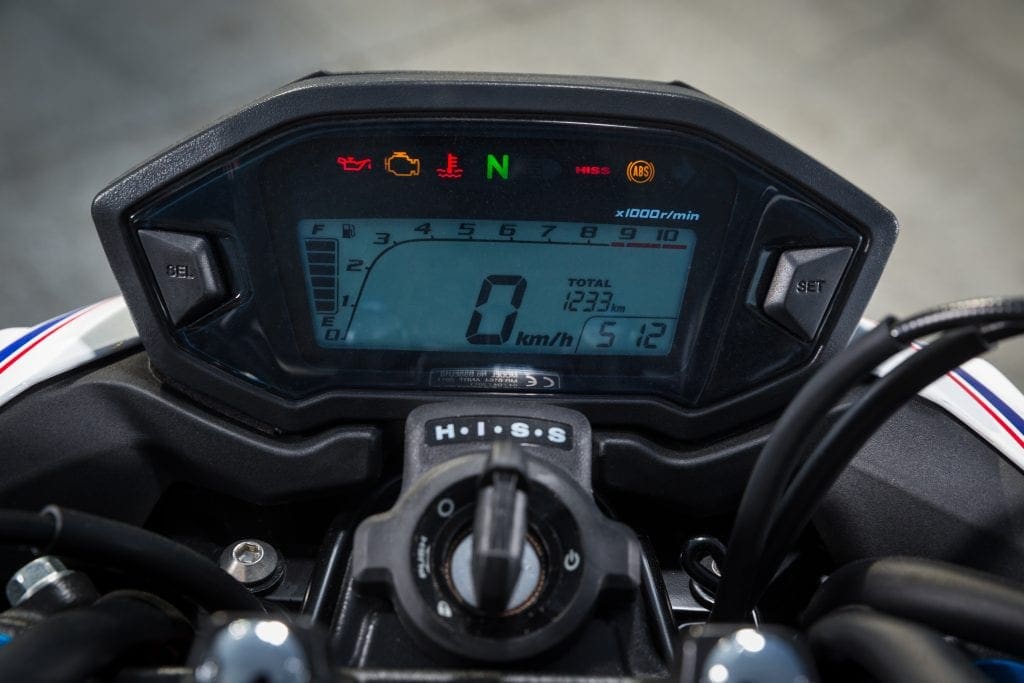 The switchgear is equally simple, and takes only a brief moment to familiarise yourself with, even for a Luddite like me. There are only two additions to the usual start, kill, full beam, horn and indicator switches: hazards and full beam ‘pass’ flasher. Both extremely useful features that surprisingly many bikes still lack.

The official test ride started with the CB500F from the outskirts of Seville, on narrow cobbled roads, with children, goats and tourist buses all zig-zagging around us, adding to the excitement. My first impression of the bike was how smooth it felt on the uneven street surfaces. The Honda engineers had promised that the suspension had been made more progressive to soften the ride, but I hadn’t expected the bike to feel so smooth and still stable on such poor roads. While the suspension made light work of the cobbled roads, another instant delight was the throttle: the response was quick, but not jerky. There was no snatch and you could roll on and off the throttle without the bike bucking or bolting. 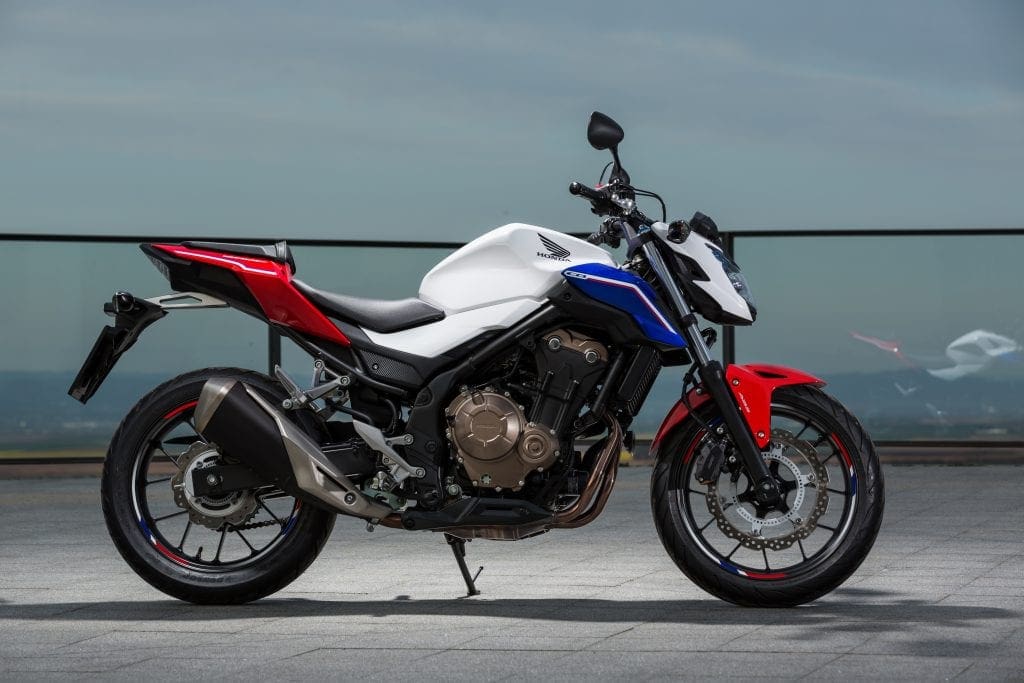 Heading up to the mountains and moving onto faster roads, the suspension and power supply still continued to impress. We rode a series of third and fourth gear bends where the bike was more than happy to lean into corners, the suspension compressing a little with braking and acceleration, but not feeling strained at any point. The wide bars make it easy to push from corner to corner and you feel very much in control of the bike, even when the pace gets quicker. 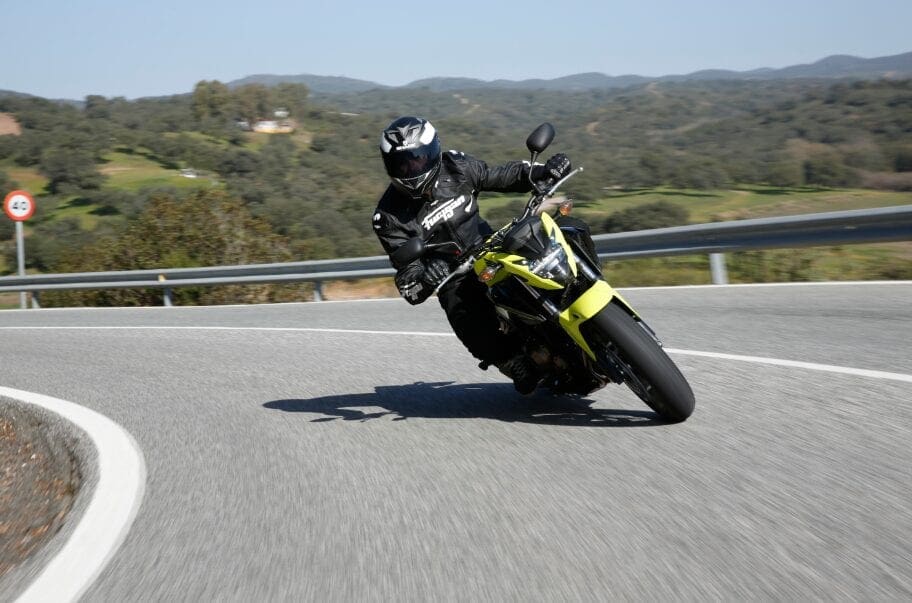 Both bikes share the 471cc liquid-cooled, parallel-twin engine, producing a claimed 47bhp at 8500rpm. This is precisely the top level of power allowed in the A2 licence category. Maximum torque is 43Nm at 7000rpm, but the bike pulls keenly from lower revs too. Although the engine is not new, the air flow into it has been improved, which means a more instant throttle response and better pick-up from across the rev range — the engine really feels like it’s punching above its weight.

There’s enough power for the bike to shoot out of corners with intent, but still remain composed. The amount of power on offer is impressive for an A2 licence-friendly machine, but it’s delivered smoothly enough that it won’t feel threatening for new riders. There’s also plenty of usable torque lower down the rev range, which means that you can be a bit lazy with downshifts at times. Having said that, to keep the bike ready to attack, it’s best to keep the revs between 6,000 and 8,000 revs, where the magic happens. 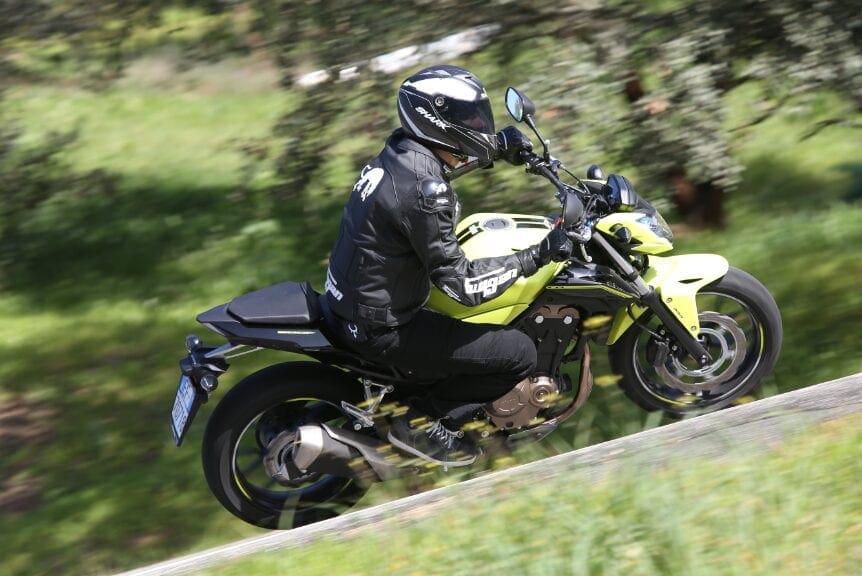 It’s not just the mechanical performance that makes the CB500F pleasant to ride. For me, a good chunk of the enjoyment came from how easy and pleasant the bike was to ride, and the relaxed and natural riding position in particular. The wide (and fairly high) bars and the upright body position make it easy to control the bike both in the city and faster roads. The relatively low seat (785mm) is very comfortable – even if it doesn’t look it – and the foot pegs are nice and low.

After about 75 miles we swapped the street-chic CB500F for its athletic brother, the CBR500R, and headed out in search of some more twisty roads. 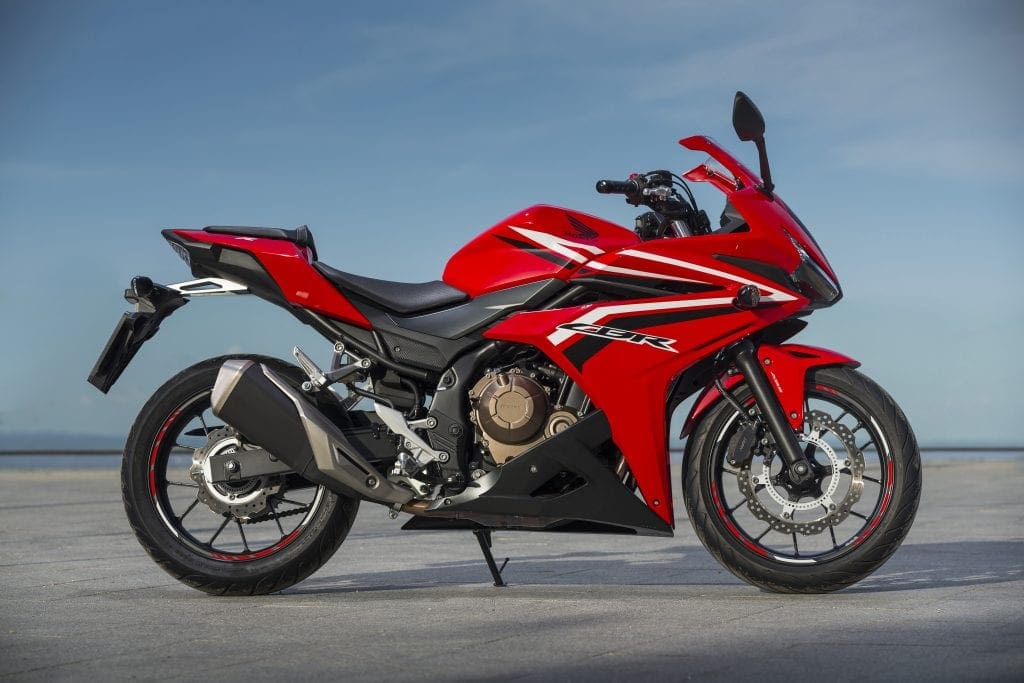 The CBR500R may have the same engine and chassis as its naked brother, but where the ‘F’ has been stripped back, the ‘R’ looks like a proper sports bike with the full fairing and lower bars. But despite the sporty appearance, it didn’t initially feel that different. The riding position is quite upright for a sports bike, and the handlebars – although narrower and lower than those of the ‘F’ – are still easy enough to reach without flattening yourself on the tank. 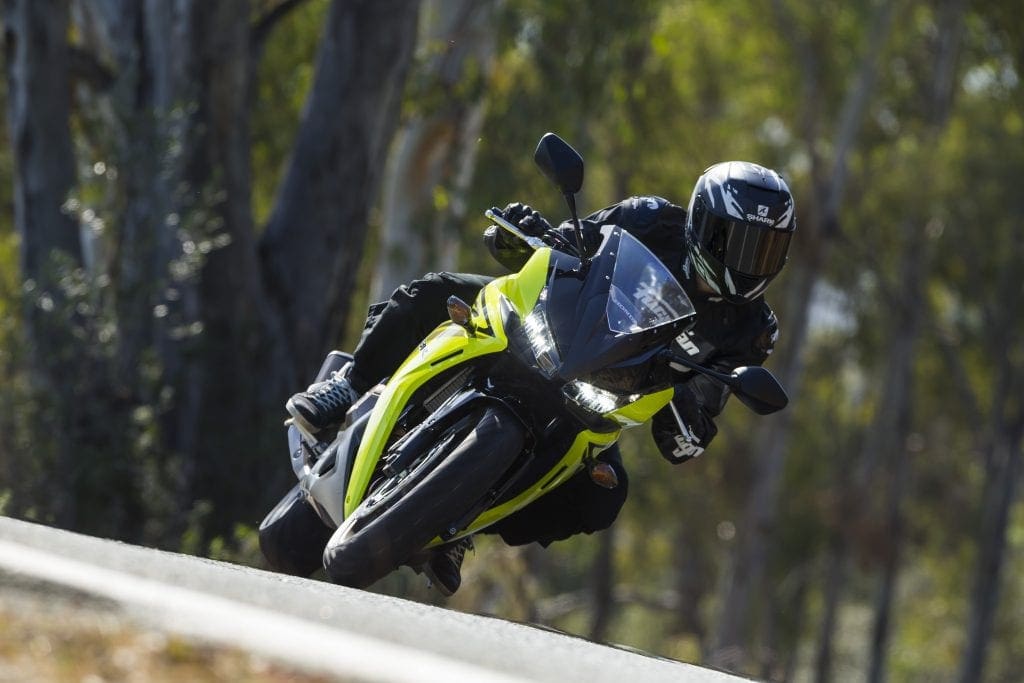 In town traffic it was evident that the CBR500R benefitted from the same silky suspension and the steady throttle action as the CB500F. Although the bars allow a slightly smaller steering angle before the tank gets in the way, the bike is still easy enough to navigate through traffic and handles well at crawling speeds. 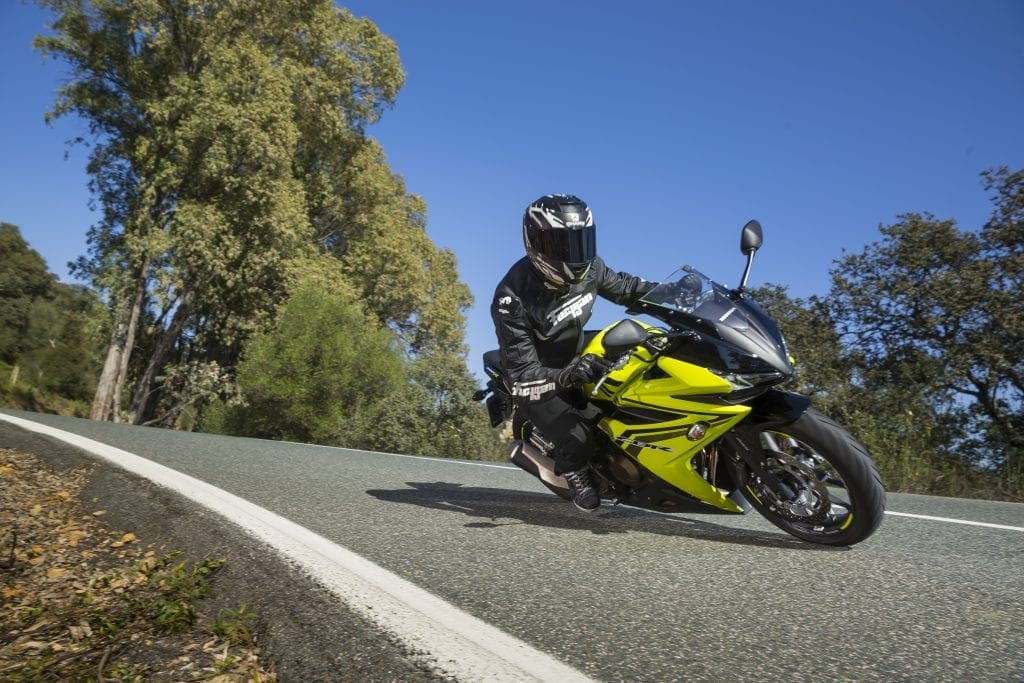 As the ride gathered pace, the CBR500R started to live up to its sporting heritage, carving corners with effortless precision. The riding experience was not too different from that on the naked CB500F, with the main difference being different airflow due to the fairing, which helped make faster speeds more streamlined. Other than that, there’s not much that separates the two bikes.

Who should buy one — or two?

More versatile than first impressions would suggest, both bikes would work well as sensible commuters as well as weekend tools for serious hooning.

There’s not much that separates the bikes other than the looks and the riding position. The CB500F is more of an urban machine and the lack of fairings, although fun, might be a limiting factor for longer rides in poor weather. The CBR500R is the obvious choice for anyone who wants to turn the scenery into a blur, but also works surprisingly well in city traffic.

No new bikes are cheap, but the bikes are priced competitively at £5,099 for the CB500F and £5,599 for the CBR500R. They are slightly more expensive than A2 licence bikes from other Japanese manufacturers, but they also offer more power than the popular 300cc machines that dominate the category.

The fuel economy offered by the bikes is very impressive. The official figure is 83mpg, but after our spirited 140-mile ride the actual numbers were 60mpg. With a slightly more sedated pace this could surely be improved further.

If you are after a powerful A2 licence-friendly bike then it’s worth the trip to the dealership to try one for size. Demos are available from March and sales will start in early April.