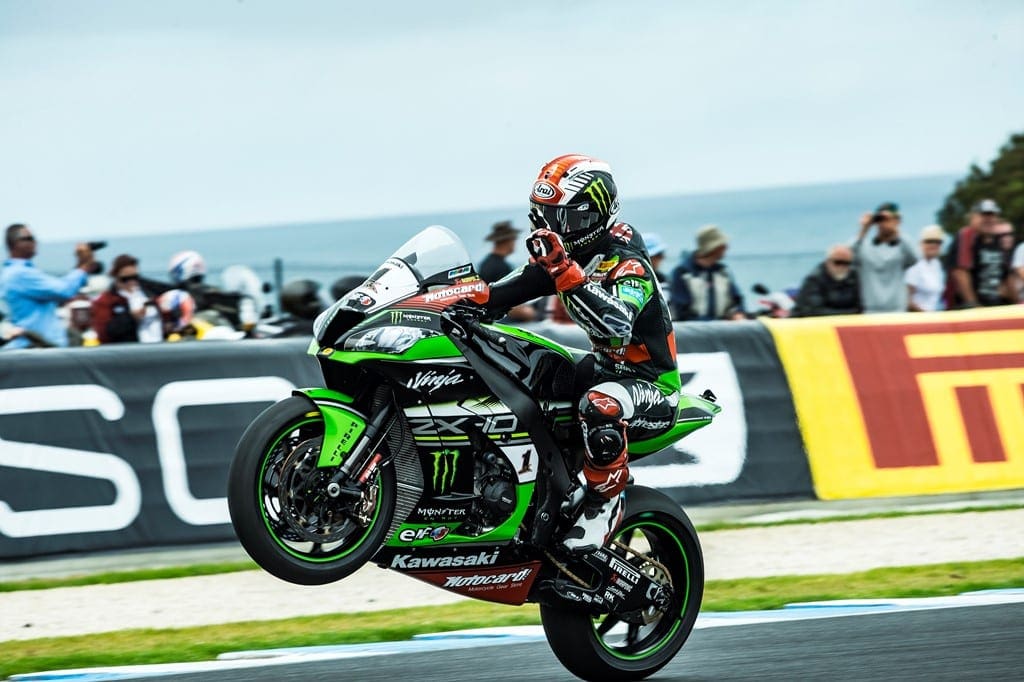 Jonathan Rea has kicked off his title defence with an incredible last lap victory over Ducati rider Chaz Davies, the Kawasaki rider pulling a move around the outside to beat Davies over the line by 0.063 seconds.

After a great getaway for both ZX-10Rs, Sykes and Rea went almost side-by-side into the Southern Loop as the first racing lap of the 2016 season got underway. The lead group off the line was led by the Kawasaki Racing Team pair, with Ducati’s Chaz Davies getting an amazing launch from ninth on the grid to join his teammate Giugliano and Honda rider Michael Van Der Mark in the battle at the front.

Rookie Aprilia rider Lorenzo Savadori was initially the last of the lead group of ten, before Yamaha duo Sylvain Guintoli and Alex Lowes joined Honda rider Nicky Hayden in the push through to join the battle and an eight rider train set off for the line. Sykes lead the group as the Ducatis dueled behind him and Rea, with Flying Dutchman Van Der Mark joining the fight. Sykes, after losing the lead to Rea, then dropped back along with Hayden and the Yamahas of Lowes and Guintoli, leaving the two Aruba.it Ducati riders to tousle with Van Der Mark in the lead group of four, headed by Jonathan Rea.

Rea led the way as the war raged behind him, with the lead group becoming a trio as Davies and Van Der Mark proved the only two able to keep the pace of the reigning Champion. Holding the lead but with two riders breathing down his neck, Rea stayed calm and kept his race rhythm going as those behind continued to play cat and mouse with each other. As the laps ticked down, Davies got closer and started to seriously pressure the Kawasaki rider, seeming to be attempting to test any possible passes he had in mind for the last lap. 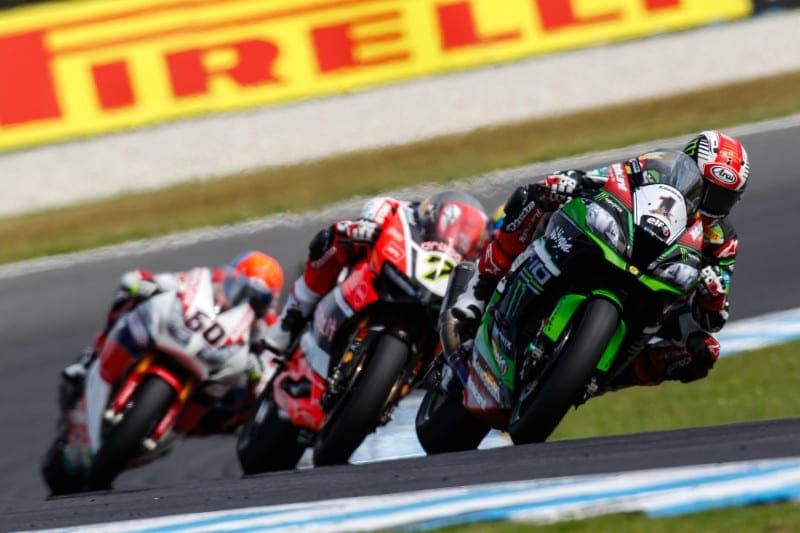 On that last lap, Davies pounced down the hill from Lukey Heights, taking the lead just before the final corner, before Rea took the outside line and blasted around the Ducati through the final turn, the two bikes straightening up on the Gardner Straight with almost nothing between them. It was the flash of green that finished first, however, as Rea’s bravery around the outside proved to give him the pace necessary to nudge the nose of the Kawasaki over the line in front, separated by only 0.063 seconds.

Van Der Mark came home third behind the two of them, recording his fourth career podium in only his second season,and local hero Josh Brookes made up for a difficult qualifying session to come home tenth. 2014 WorldSBK Champion Sylvain Guintoli was the first Yamaha home in sixth, showing great potential for the YZF R1 in its first WorldSBK outing, and Leon Camier carried through his form from practice to end the race seventh on his MV Agusta. Jordi Torres on his Althea BMW in eighth ensured there were six manufacturers classified in the top ten.

The lights go out for Race 2 tomorrow, allowing riders and teams to sleep on the results of an incredible Race 1. 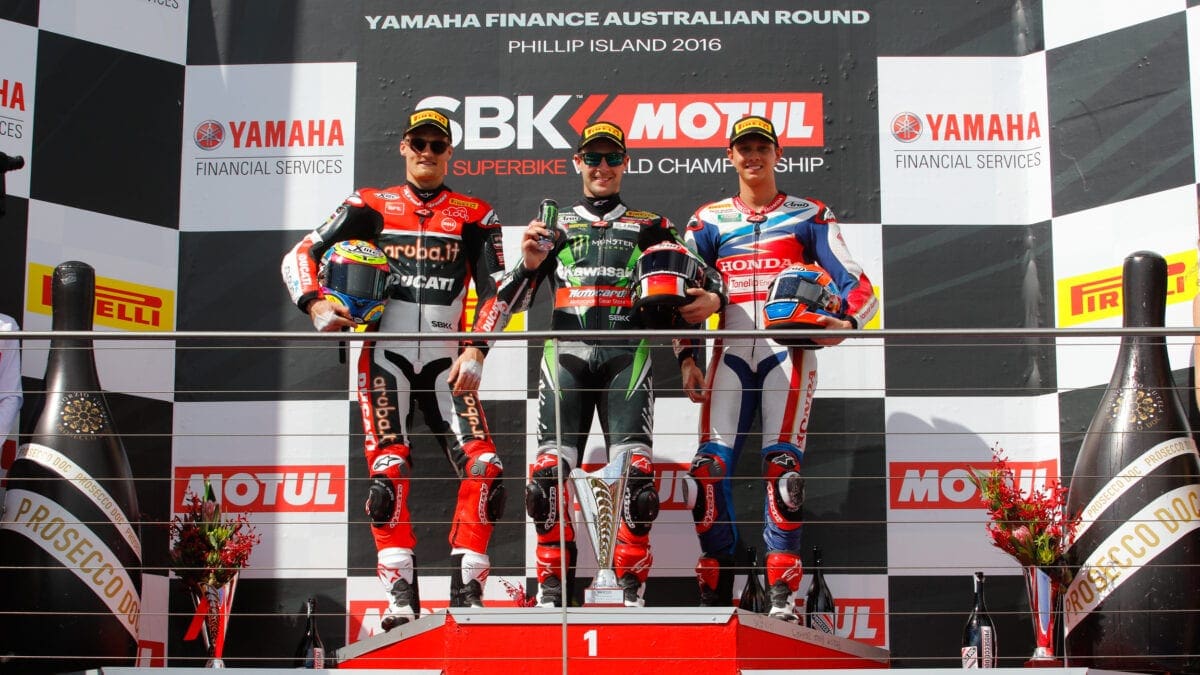 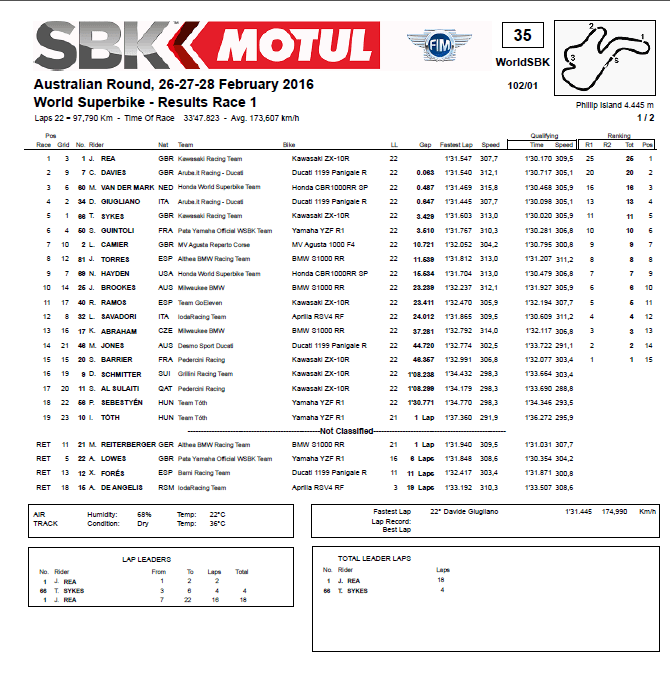