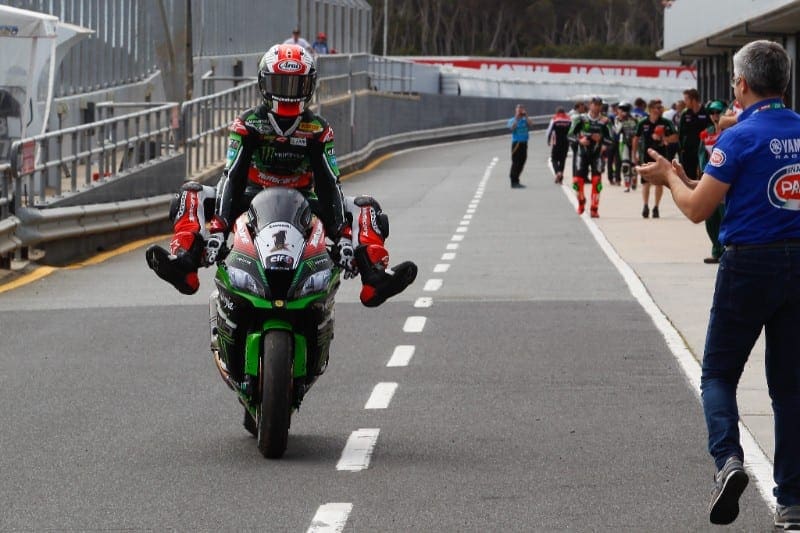 Reigning Champion Jonathan Rea took the first double win at Phillip Island since Carlos Checa in 2011 today as key title rival and last year’s runner up Chaz Davies fought hard on the final lap, in the end losing the front into Turn 4.

It was Tom Sykes on his ZX-10R got the best launch off the line from pole, with teammate Jonny Rea taking Ducati’s Davide Giugliano by the time the WorldSBK field first launched through the Southern Loop. After briefly challenging for the lead, Rea then settled into second as Michael Van Der Mark made a move to take P3 from Giugliano. The Flying Dutchman then had a look down the inside of Rea into T2 before thinking better of it and holding position, the two Ducatis then lead by Chaz Davies close behind and ready to pounce.

Nicky Hayden, initially staring down a gap to the front group, then clawed back the time to the Ducati in front of him and tagged onto the front group. After a few laps staying with those in front, the Kentucky Kid then made a move into T1, Giugliano initially pushed back into P6 until the Italian fought back later in the lap. Hayden took him back once again, before the Ducati rider managed to cut back inside again and claim P5. 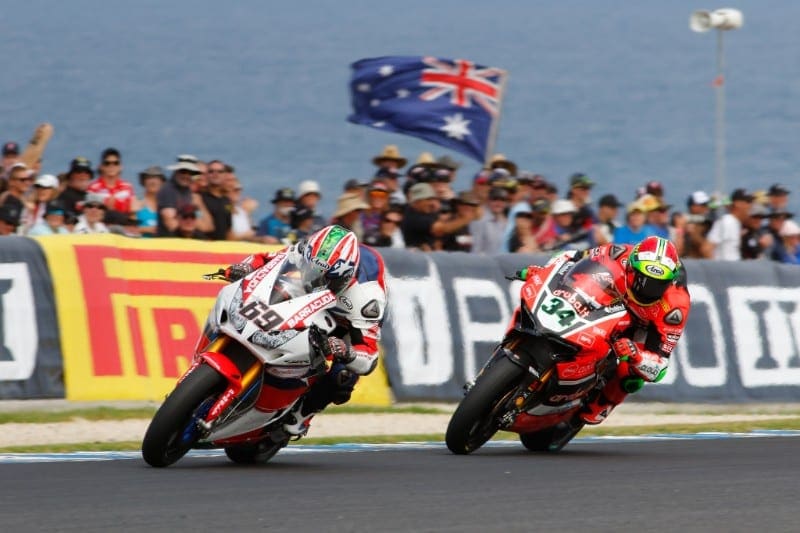 With 12 laps to go, Sykes ran wide into T4, opening the door for teammate Rea to go through for the lead. Michael Van Der Mark and Chaz Davies needed no invitation to follow the reigning Champion through, and into Turn 1, Michael Van Der Mark took the lead from Rea into T1, the young Honda rider keeping the position and leading the group of seven riders then joined by Yamaha’s Sylvain Guintoli.

Althea BMW rider Jordi Torres, starting from P12 after an injury in testing, was the rider leading the charge to catch up by the time Giugliano attempted a pass on Sykes and clipped the Yorkshireman’s back wheel. Pushing both the Kawasaki in front and his own Ducati wide, the move from the Italian saw Nicky Hayden and Sylvain Guintoli given the green light to take them both, the Frenchman’s opportunism to grab the position pushing the new Yamaha YZF R1 into the top 5. The battle in the final laps seemed the decisive factor in which of yesterday’s podium sitters in Race 1 would be on the top step today.

Davies then took Rea into T4, before Rea fought back into T1 and blocked the line for his rival in any attempt to repass him into the Southern Loop. Turn 4 looked set to be the scene of another attack on the final lap after that first successful rehearsal, and sure enough Ducati rider Davies tried the move again, unwilling to settle for another P2 after being beaten by big title rival Rea in Race 1. Davies, determined to at least try, found himself sliding off the track into the gravel as the ambition of the move outweighed his stopping distance, sadly seeing the chance of victory slip away. 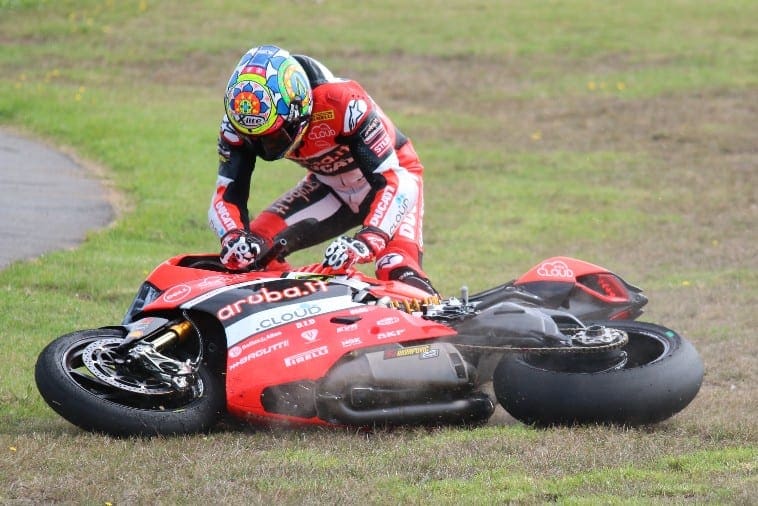 The move left Rea out in front of Van Der Mark and the Dutchman’s American teammate Nicky Hayden hanging onto third, the Kentucky rookie having improved his management of the Pirelli tyres significantly since his first race and setting very competitive lap times. Stalked by Ducati rider Giugliano throughout the next few corners, it seemed the MotoGP Legend was set for his first podium on his first race weekend in WorldSBK, until Giugliano somehow found space to go past with a spectacular move to just pip the American to the podium.

Buriram is now the next stop for WorldSBK as the paddock heads north to Thailand, the scene of Rea’s first double of 2015, and those chasing the reigning Champion will be sure to fight hard once again as they try and stop the Northern Irishman in his bid to be the first back to back Champion of the new Millennium. 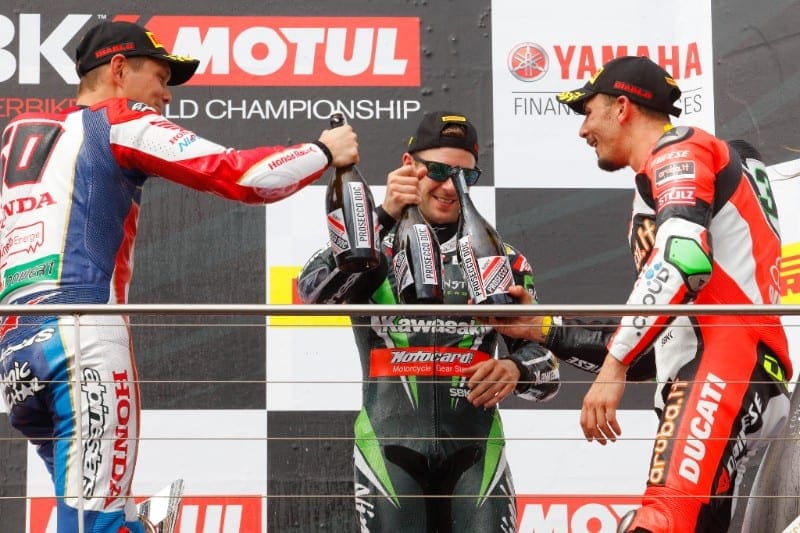 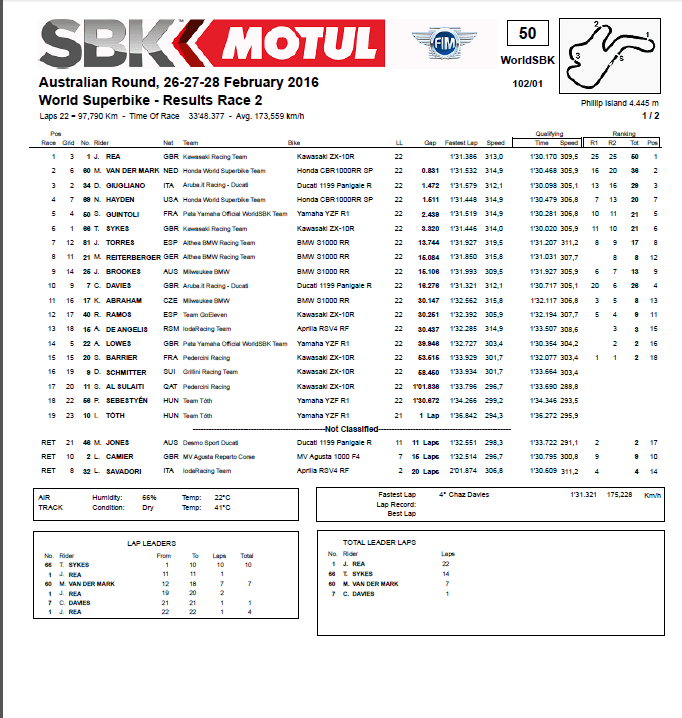 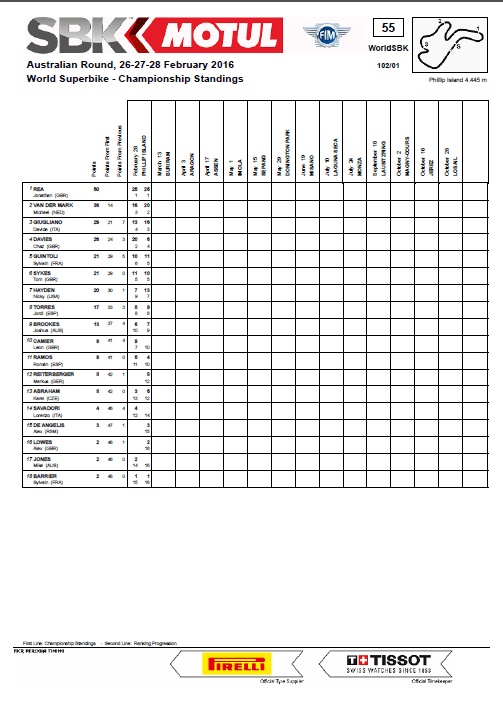