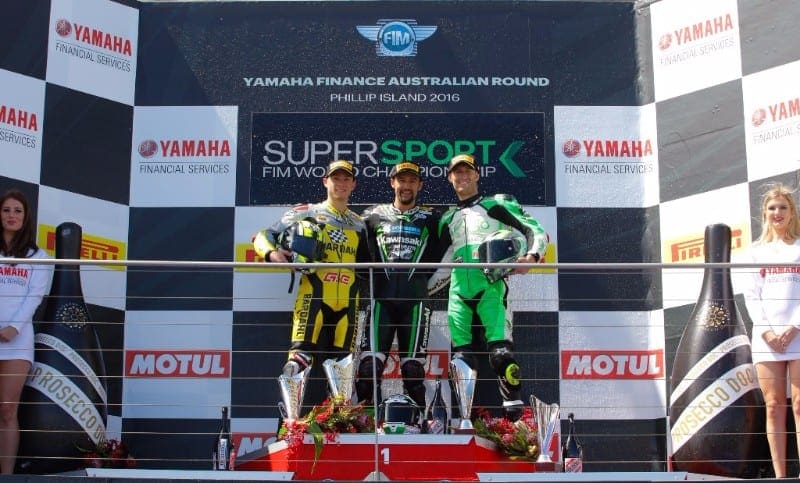 Swiss rookie Randy Krummenacher has taken victory in the WorldSSP race at Phillip Island, beating STK600 graduate Federico Caricasulo and wildcard Anthony West to the top step of the podium.
Honda’s PJ Jacobsen got the best start from P2 on the front row of the grid and MV Agusta rider Jules Cluzel, who has suffered a difficult weekend on his return to the WorldSSP grid after being ruled out of the end of 2015 due to injury, got an incredible start from P8. The Frenchman hit the front only a couple of laps later as the real battle began and the breakaway group started to pull away.
Wildcard Anthony West was another rider who gained a lot off the start, joining the lead group after just missing out on entry to the first ever Tissot-Superpole 2 yesterday. The Australian managed to keep the lead pace of the front group, battling for podium positions, before taking the lead of the race just after being informed that he had to drop two positions for an earlier infringement. Luckily seeing the sign and obeying the ruling, the Aussie rider dropped back from the lead and back into the battle behind.
On lap 9, Jules Cluzel ran into the gravel and opened the door for a duel between reigning Champion Sofuoglu and wildcard West. Not wanting to let the Turkish rider escape, West fought hard before eventually having to concede the pace advantage of the Puccetti rider, who began to pull away and create a gap to the group behind.
Rain began to fall lightly in the first two sectors, but Sofuoglu continued to make a gap to those behind, the Turkish rider dropping his times even as conditions worsened. Krummenacher then began to respond, until reigning Champion Sofuoglu suffered a tyre problem on Lap 15, lowsiding into the gravel at Turn 6. That left teammate Krummenacher to inherit a well-deserved lead after managing the conditions perfectly and still staying ahead of the chasing pack.
Wildcard Anthony West, who has previously won in races in both WorldSSP and Moto2, was left in a battle over the last few laps with Caricasulo, positions switching and both riders fighting hard over what had become a chance at P2 in the race. On the final lap, as Krummenacher crossed the line more than two seconds clear of the rest of the field, the Australian and the Italian went head to head, with West riding as defensively as possible and maintaining his grip on P2 for the majority of the lap. West, with track position as they straightened up for the final push to the finish, tucked in for the dash to the line as Caricasulo took the slipstream. Almost side-by-side down the first part of the straight, it was the Italian rookie who made it over the line in front, his bike crossing the line only 0.014seconds ahead of that of his wildcard rival.
Krummenacher now leads the Championship after his first race in WorldSSP, but teammate and reigning Champion Sofuoglu is sure to hit back soon, looking to turn his incredible pace in practice into a win next time out in Thailand.