Rossi at Losail MotoGP test, ten corners in and falls: “It was a small slide at 70kph” 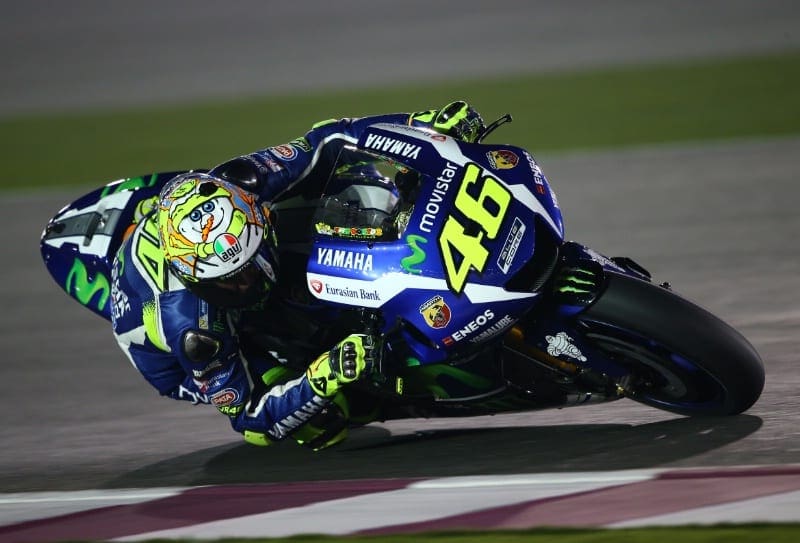 The Qatar Test gets off to the worst possible start for Valentino Rossi who fell on his first lap, recovering to finish third.

Qatar hosts the third and final MotoGP World Championship test of 2016, one last chance for riders to improve their machines before the start of the year. The Movistar Yamaha MotoGP team confirmed they would be using the hybrid 2015-2016 bike without the rear fuel tank, Valentino Rossi eager to get to work with the finalised bike. Unfortunately the experienced Italian fell on his first lap, sliding off unhurt and fortunately able to return almost immediately to his pit box.

From here Rossi focused on improving his pace and spent the majority of the test towards the top of the time sheets. The Qatar Test is important not only as the final test of the pre-season, but also as the first race of the year will also be held at the Losail International Circuit on the 20th of March, thus finding a strong bike setting now could pay dividends later. A best time of 1’55.894s put ‘The Doctor’ third overall and 0.442s shy of his teammate Jorge Lorenzo who topped the times. Rossi, like many riders, is yet to complete a full race run with Michelin tryes and the spec ECU, completing one before the Grand Prix may offer yet another advantage.

Rossi said: “I started in a bad way, because after ten corners I crashed. I wasn‘t very fast, but maybe because I had too much angle the rear slid, but fortunately it was just a small slide at 70 km/h. It wasn‘t a big problem but to start like this wasn‘t fantastic… After the problem we jumped on the other bike and I‘m quite satisfied about today because, also here in Qatar, it looks like our bike is competitive. We can be strong and fast and this is the most important thing, because it’s already the third track where the Yamaha is competitive. We also started with a good base set-up, in fact I didn‘t work a lot on it.

“I felt good from the first moment and rode quite fast and I was able to consistently improve my lap times and in the end I‘m in the third position, so it was a good day. Today Jorge was very fast, he was faster, but like in Phillip Island me, Viñales and Jorge are the stronger riders. In Phillip Island there was also Marquez, here it looks like he was a bit slower than us today. I‘m happy to stay with the frontrunners and already lap in 1‘55s, a little bit faster compared to the test last year, so it‘s a good result. After the first two tests we decided to go with the bike that‘s more similar to last year and now we have two race bikes ready in the garage, so we‘re already in race-mode.”