The rumour mill surrounding the upcoming Suzuki 2017 GSX-R250 sporty quarter-litre motorcycle for later this year keeps on spinning and Japanese magazine Autoby has this as its take on the new bike. 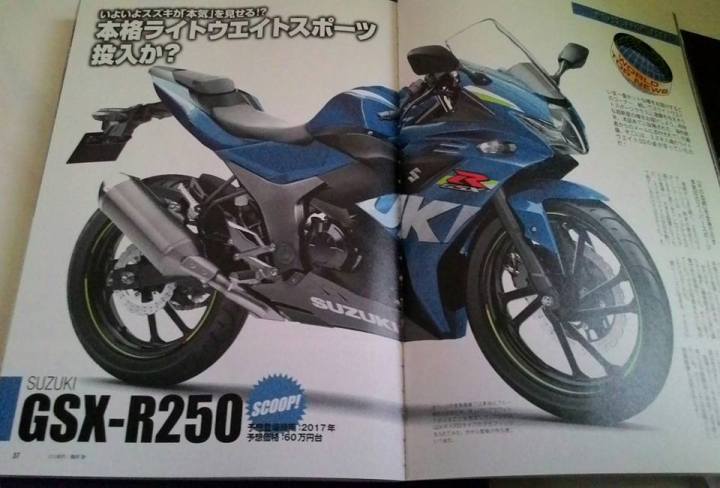 The image has just appeared in the new issue of the magazine (and to be fair, our picture of it isn’t the best) but it does give us an idea of what the bike will be likely to look like when it comes out as a sportier stablemate to the other smaller Suzukis as part of the 2017 model range.

According to the Japanese, the smaller bike DOES indeed have the frame ‘wings’ that we first showed you last month in a set of patent designs from Suzuki. That technology which sees the bike’s frame flare out at the shoulders with a wing each side made from tough carbon/plastic composite hanging straight down which acts like a cradle for the engine itself. The bit of bodywork is called the ‘inverted Fuji shape’ and also forms part of the bike’s outer bodywork (on the Autoby image this is the black chunk of frame that you can see directly to the left of the large ‘U’ of Suzuki on the fairing).

The rest of the bike looks pretty much as we expected with a rakish face, sporty riding position and single-sided front brake. There’s some debate at the moment as to whether both this GSX-R250 and the more-racey R250/300 Yamaha will in fact get better, higher-spec front suspension or not in time for the launch which will happen around September or not but for now the Japanese think that the quarter-litre sportsters will have right-way-up forks instead of upside-down options.