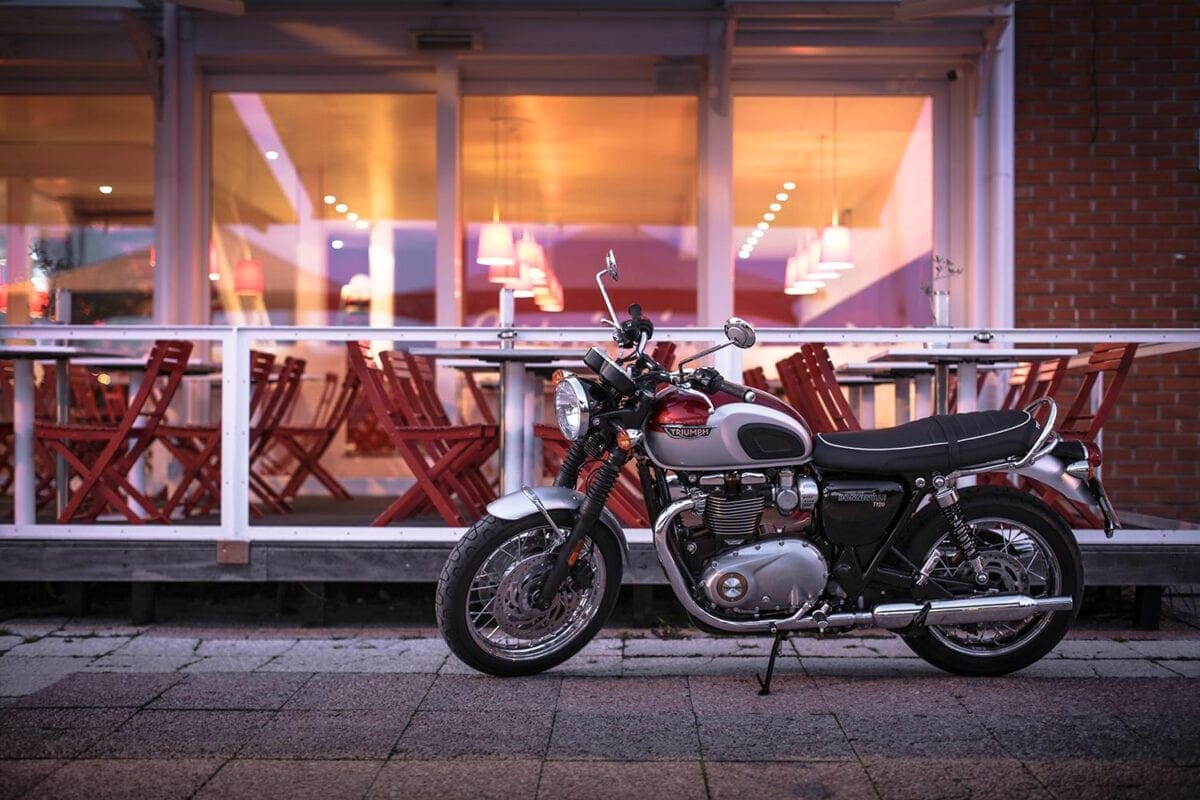 This is the core of the new Bonneville family –Triumph has focussed closely on the design of the machine, giving it cleaner lines than the outgoing 865cc Bonneville T100. The ride-by-wire engine for instance, while 335cc larger and now fully water-cooled, has a more tidy silhouette – it’s actually slightly slimmer. The exhaust now more closely follows the clean, straight-through lines of the first 650cc Bonnie (the T100’s pipes kicked up slightly at the back); this is easy to see as a nice little design touch, until you consider that, in order to meet Euro 4 regulations, the new machine has a catalytic converter fitted. Through some incredible use of investment casting (a time-consuming process involving wax and ceramic), clever welding and twin-walled header pipes, the exhaust gas actually flows away from the tube’s run, under the engine, then back out before the end-can.

The twin pea-shooter silencers don’t quite sound like the machines of the sixties (particularly after a broom-handle had been used to knock out the baffles), but the water jacket that also quietens the engine has allowed Triumph to tune a deep, booming note from the pipes. It’s best enjoyed from behind, or riding through narrow, high-walled streets, but it’s a joy to listen to one of these bikes at idle or passing by.

The same attention to detail is evident in the way the radiator is incorporated into the layout – with only small portions of pipework visible when you look hard enough – or the hiding of the now necessary carbon canister, Continental ABS unit and coolant expansion tank. Get on your hands and knees at a dealer and see if you can find all three… 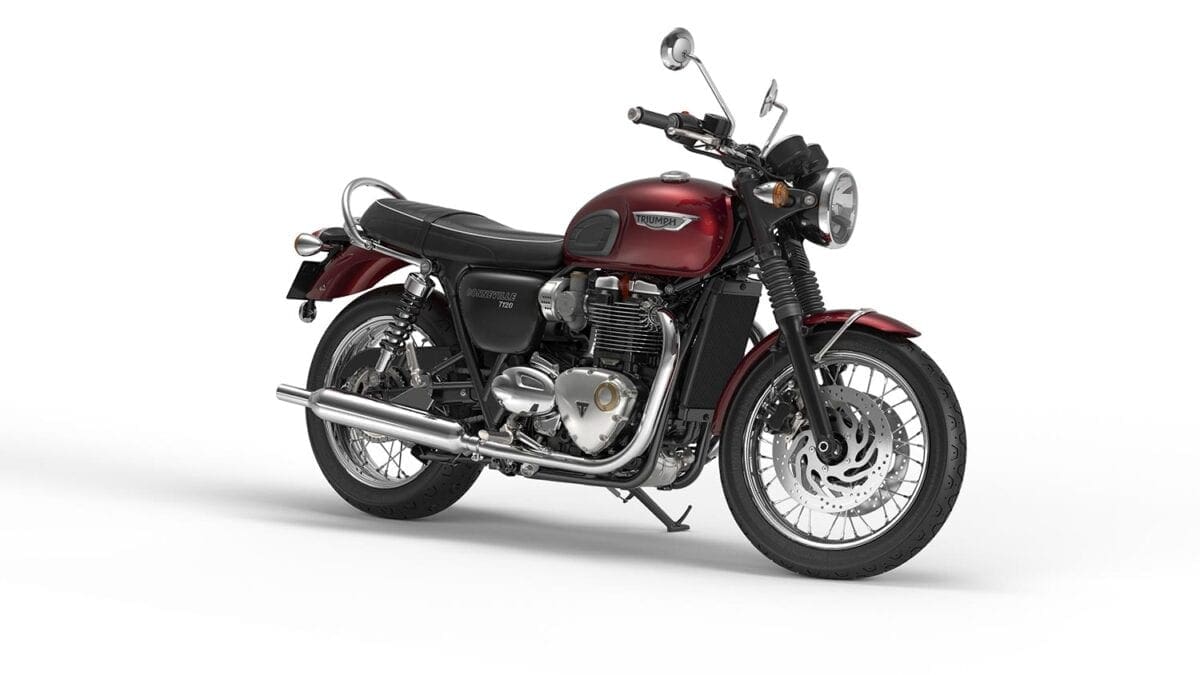 While meeting much stricter EU legislation than was in place when the T100 was launched in 2001, the new Bonnie makes 54% more torque and 18% more power. Of course, a larger capacity engine helps that, but impressively, Triumph claims a 13% improvement in fuel economy too, at 63mpg. 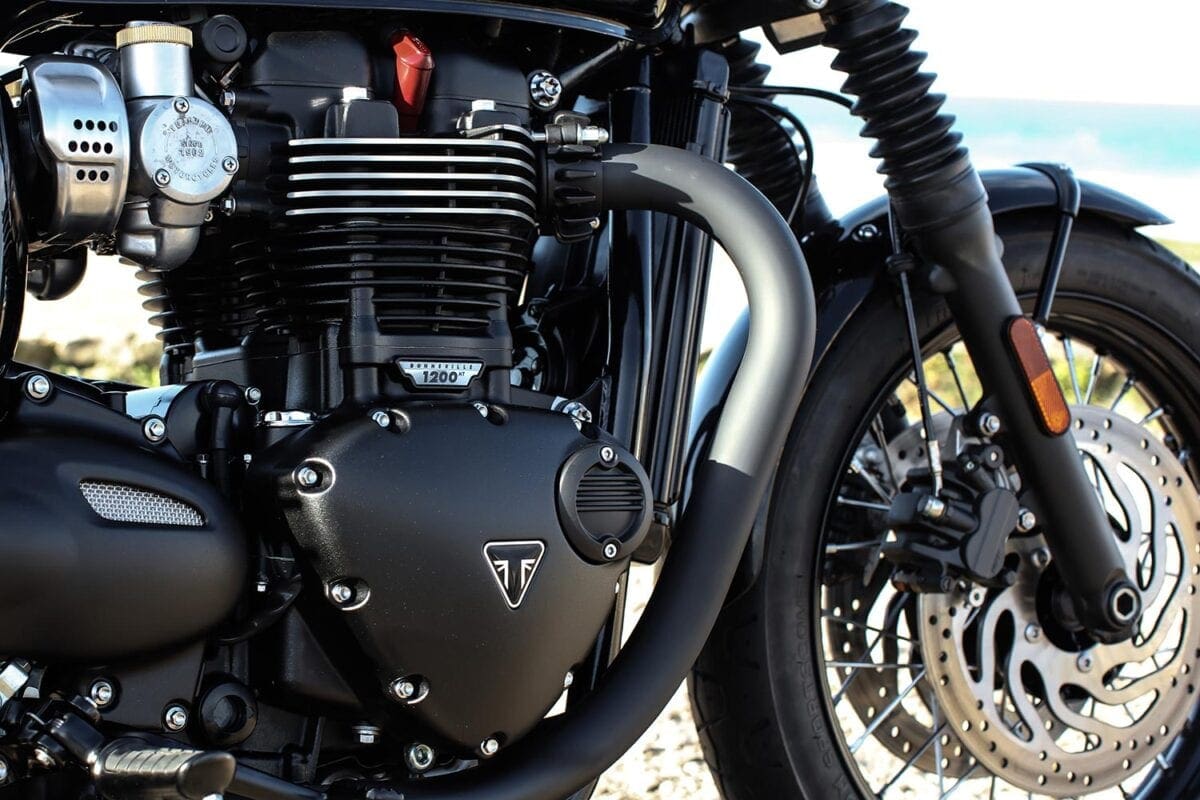 Launches always see the bikes being ridden harder than normal, with a lot of stop-start for photoshoots, but I achieved 42.1mpg. Interestingly, according to the clocks when I fired mine up, who ever rode it before me had got 51.5mpg. With the kind of use the bike’s designed for, I wouldn’t be surprised to see 55mpg. 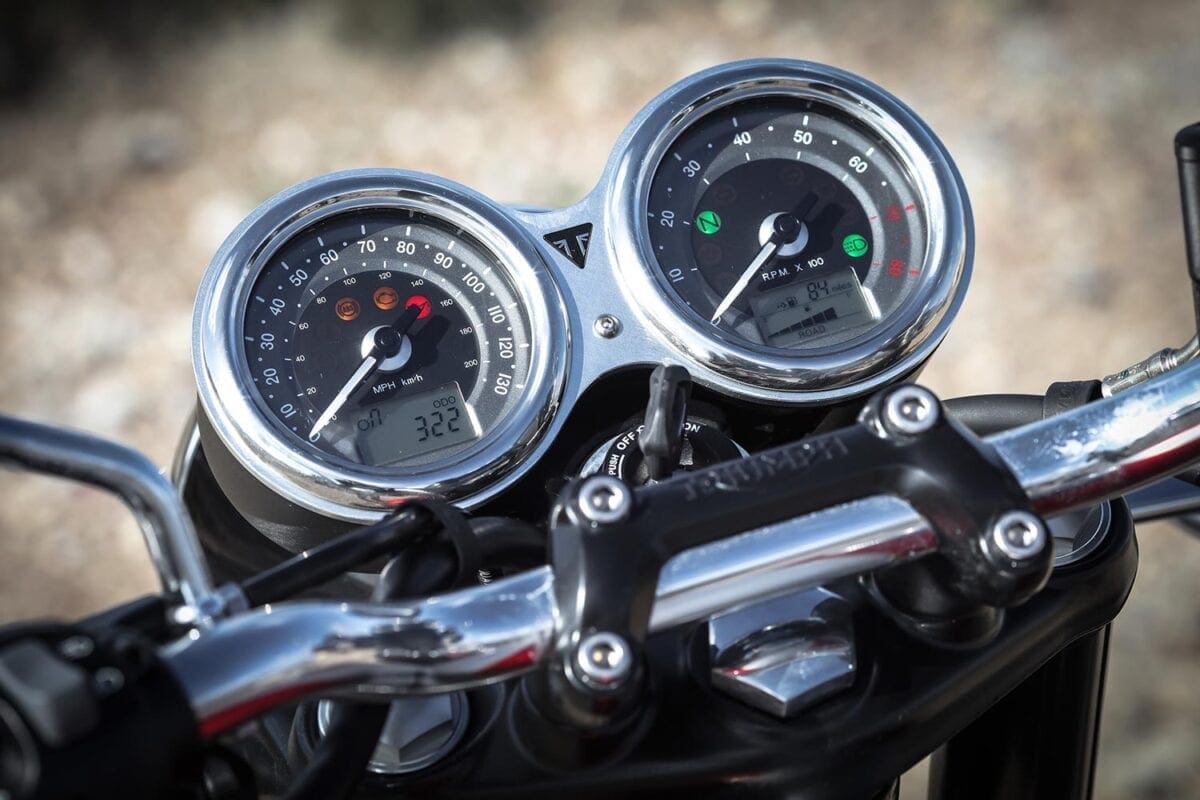 It’s great to see a pair of analogue clocks, but tucked in these convex-lens-covered units are two small but clear LCDs showing riding mode, gear, heated grip status, odometer, two trips, service indicator, range to empty, fuel level, average and current fuel consumption, clock, and access to the traction control, which can be switched off (it turns itself back on at each start-up).

Heated grips are standard, as is a USB power socket under the seat (though there’s little space to put a phone, besides tucking it under the rubber battery strap). Two riding modes share the same full power, but modify the throttle response; on this bike, I preferred Rain mode to Road, as it just gave a slightly smoother delivery that seemed to better suit the easy-going nature of the Bonneville. The assist clutch, while cable operated, does provide a pleasingly light action, making gear changes less tiring over a long ride in city traffic. The bike even comes with a centre stand… thank you Triumph! 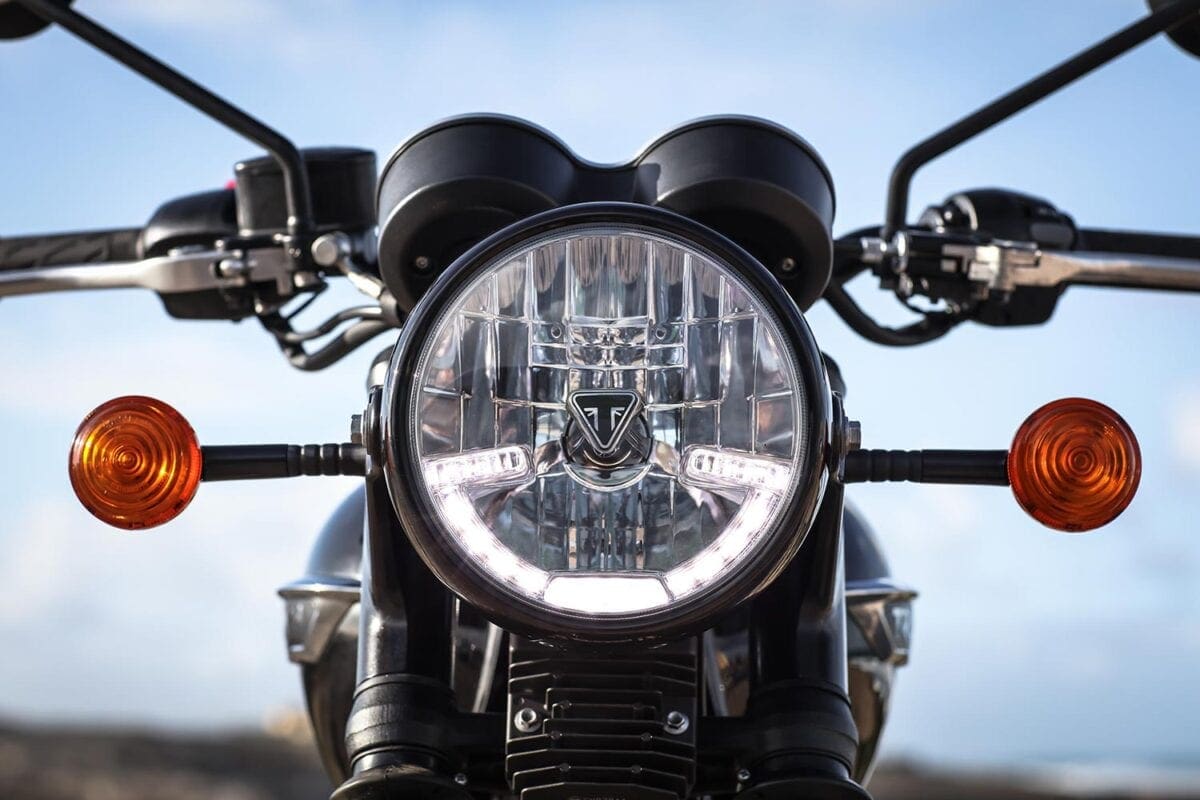 The outgoing T100 had a 19” front wheel… while the Street Twin has a more regular by modern standards 17”, keeping the look of the original bike (which had 18” wheels front and rear) means that the new T120 carries an 18” at the front and a 17” at the rear. This, combined with a relatively low rear makes for a bike that I found rather heavy to turn and disconnected, particularly in the wet. 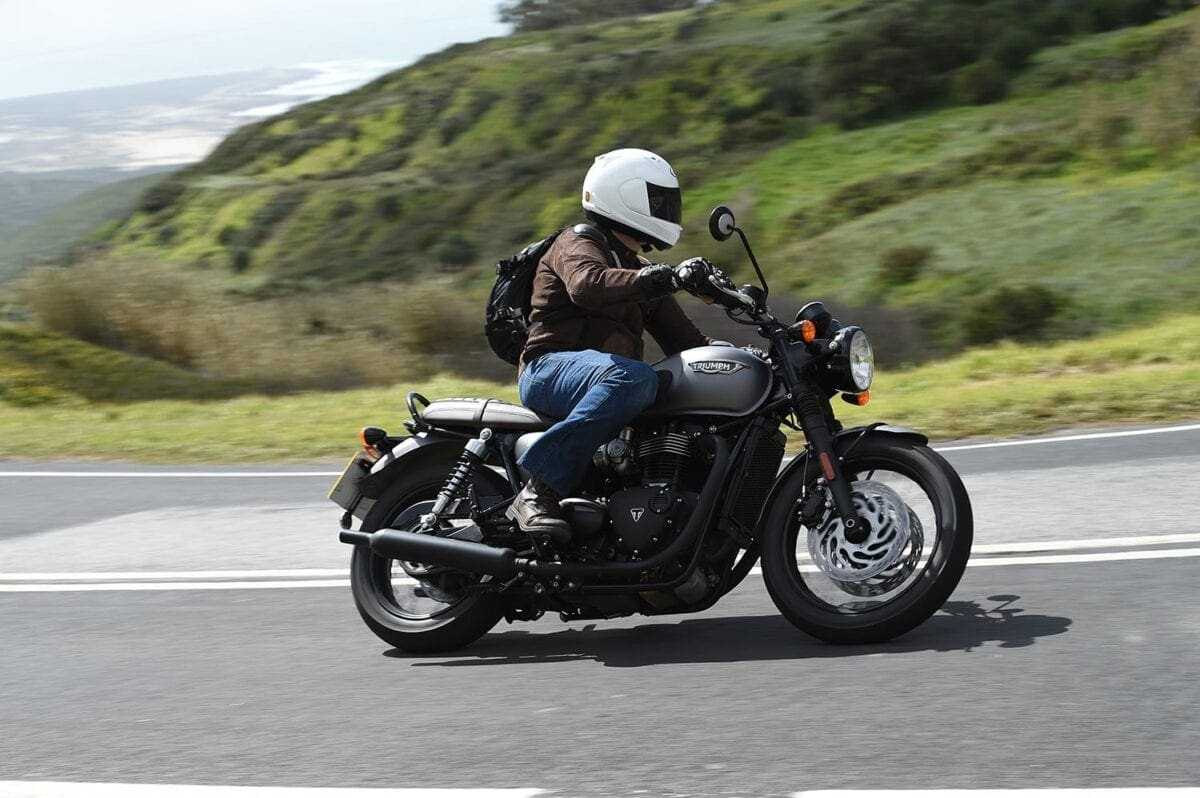 When setting out for the morning’s ride in Portugal, the roads were very slippery (and the cobbles were downright lethal, not to mention the foot-deep sand on one section of road) – I found myself going slower and slower, convinced that my bike’s headstock was too tight, or that I had a flat tyre. Only when I caught another rider, who agreed it felt heavy, did I start to relax and trust the bike more.

I found it impossible to ride the T120 without comparing it to the way the smaller-wheeled Street Twin had handled, which felt much more nimble. At the first break, I recalled that the Street I’d ridden had its rear preload jacked up, so I wound it to maximum using the bike’s ‘toolkit’ of a combined Allen key and screwdriver. Being almost fifteen stone, I found that the maximum preload worked well for me, whereas another tester – a stone or so lighter than me – preferred the shocks set to one click down from maximum for a less harsh ride.

With the preload increased, I found the bike much more enjoyable – while it still had a slightly distant feel to the front end, my confidence on the wet roads was much higher.

As the route dried out, the geometry became much less of an issue, the bike proving fairly easy to ride, and sweeping happily through the long corners. When pushed, the pegs do of course touch down, and it certainly feels heavier bike than the Street Twin (which is around 20kg lighter) – it’s not a machine designed to be hurried. 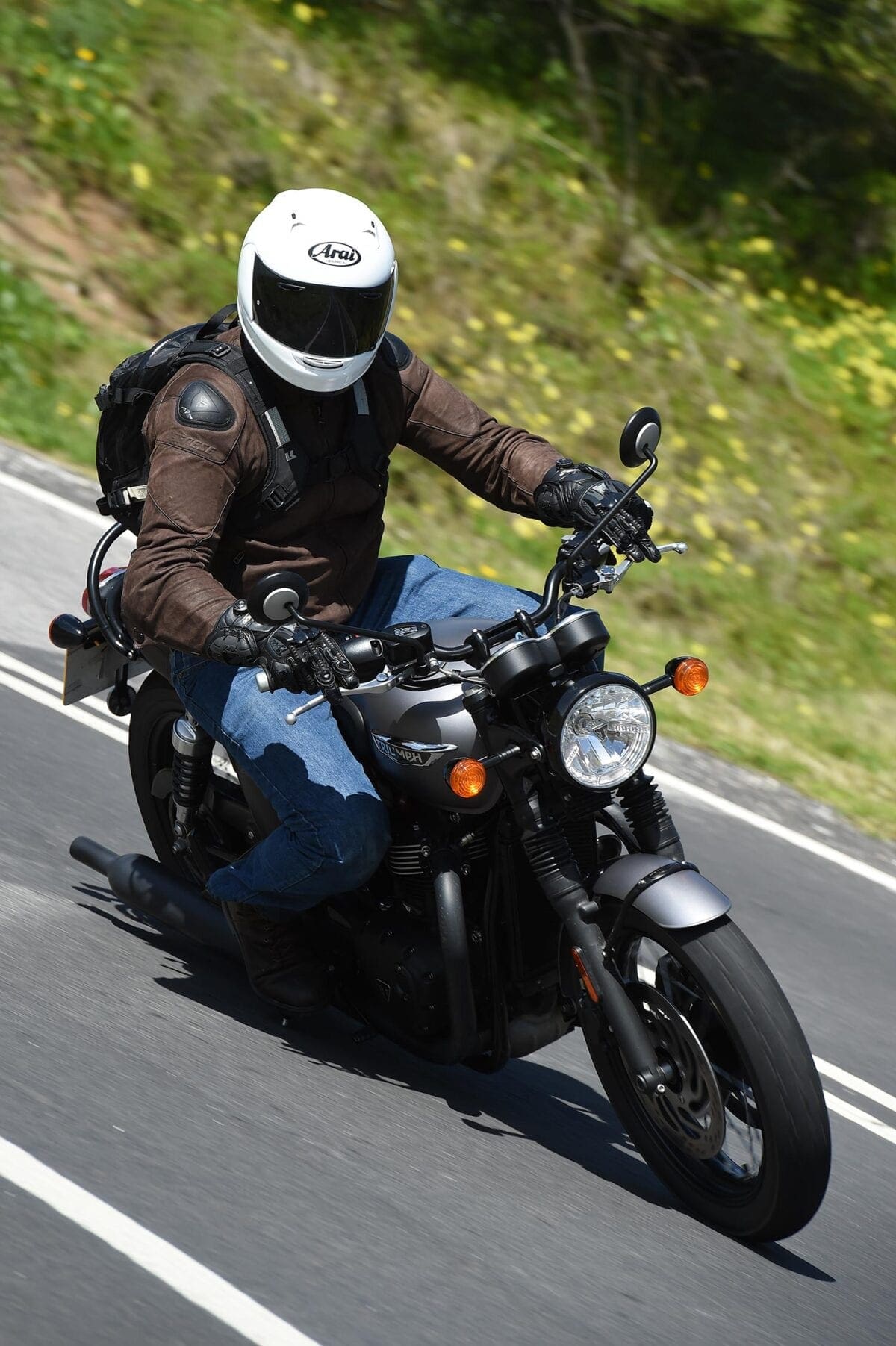 The engine is more than capable, offering a good spread of torque, and the simple two-pot floating calipers biting fixed discs do a fine job of stopping the bike – you won’t pull up in a hurry with two fingers, but they’re well matched to the unadjustable suspension and comfortable motor.

We didn’t get to ride for long enough to give a real test of comfort, but at 5’11” I found the half day to be comfortable, with no protest from my usually sensitive rear. We also didn’t tackle any motorways, and rarely got out of third gear, but the engine is lazy enough to give a relaxing ride.

To some, the Street Twin could be the more accomplished and in some ways enjoyable Bonneville – despite making less power and torque, the combination of lighter weight and easier handling made for a more thrilling and faster-feeling ride. But the T120 is the more comfortable – particularly over distance – and would be far more suited to an easy weekend enjoying some rolling countryside.

The T120 is a motorcycle that would perfectly match those looking for all the modern luxuries (like ABS, traction control and no oil leaks), with the most classic styling yet seen on a Euro 4-compliant bike. It’s a true marvel of engineering, and Triumph should be congratulated. 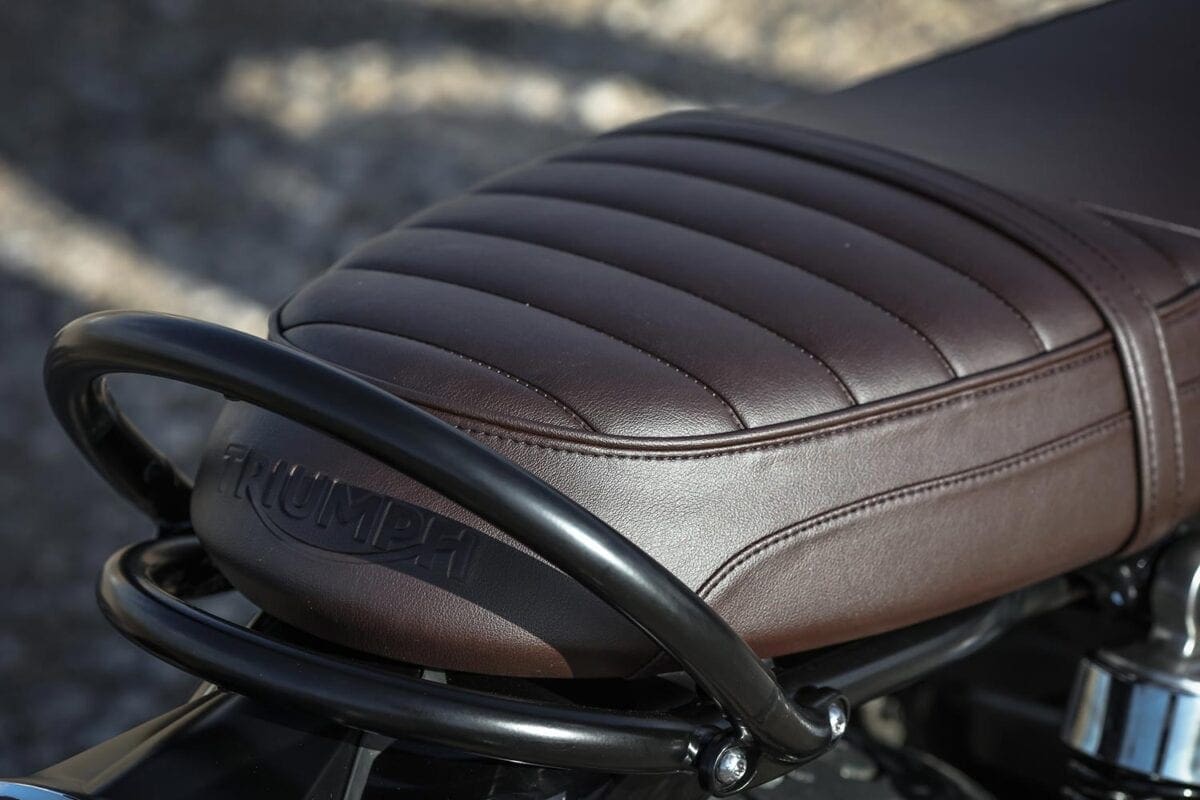 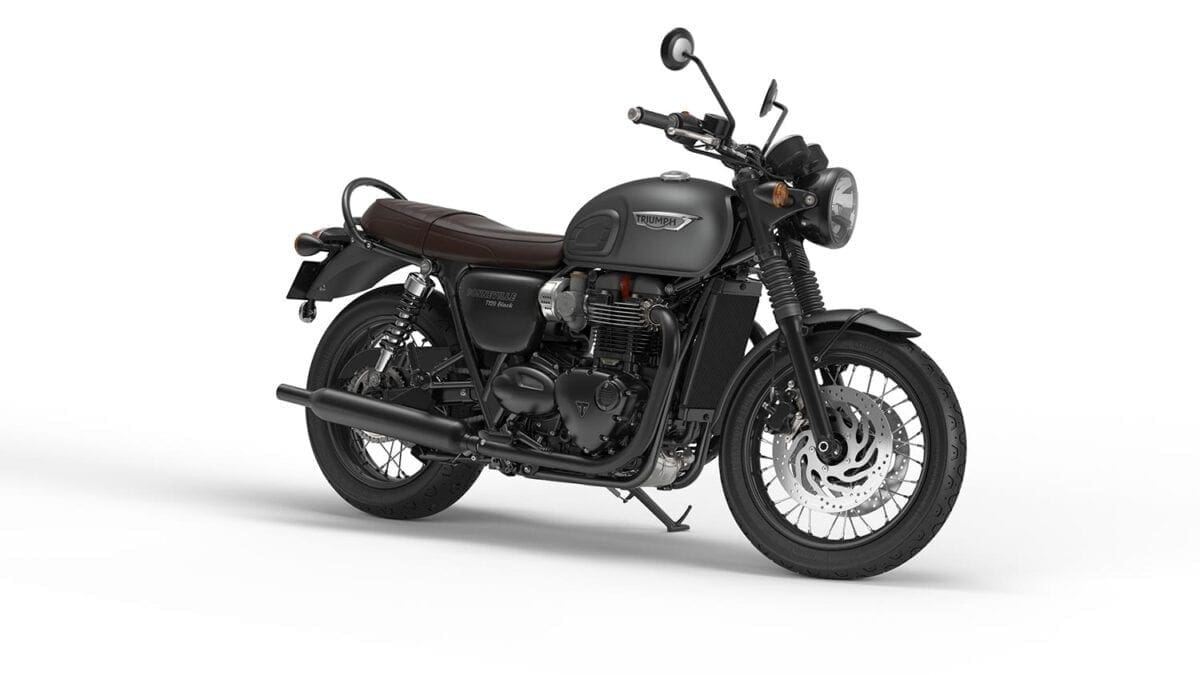 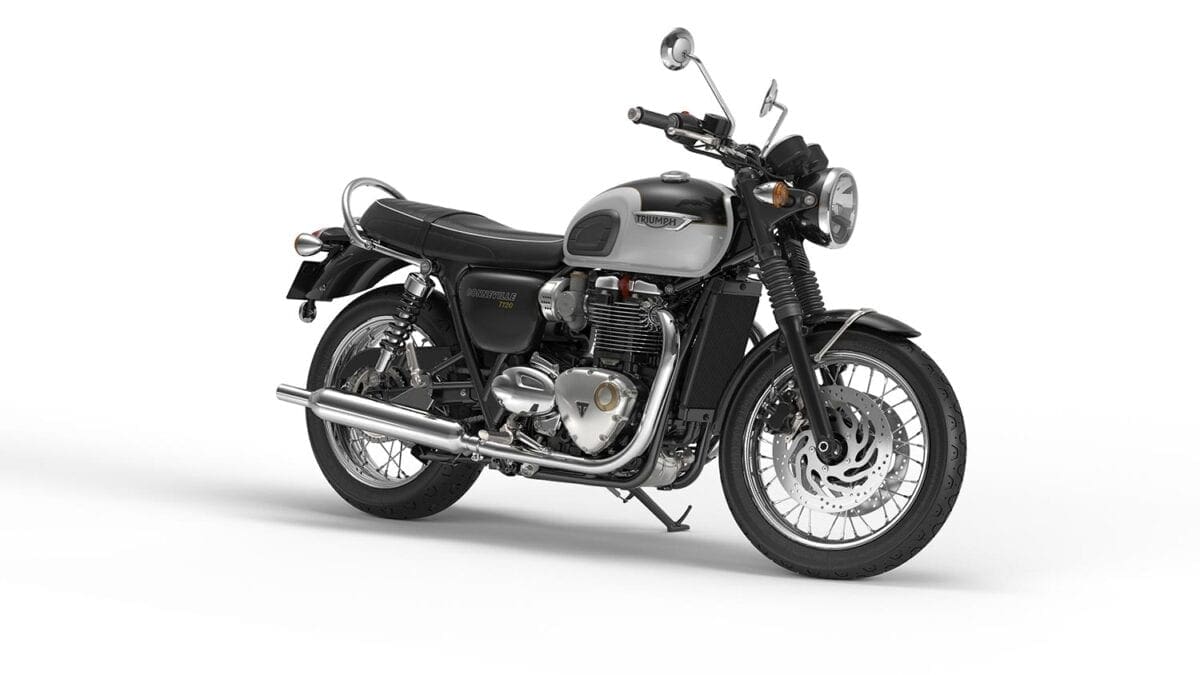 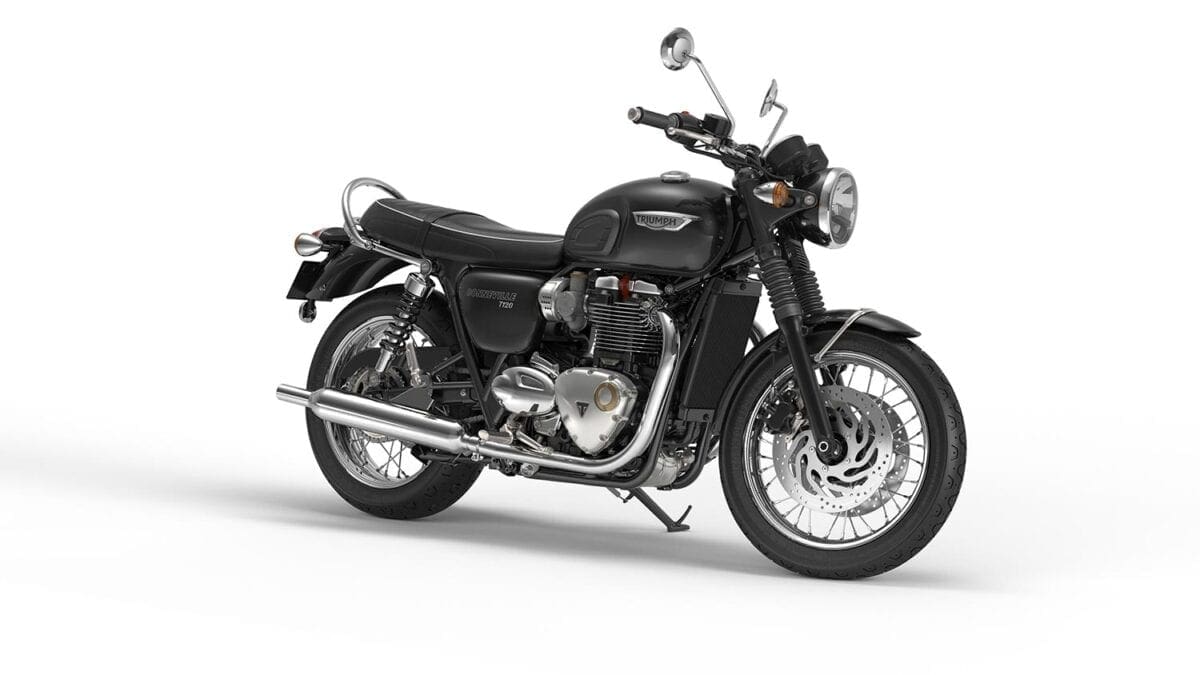 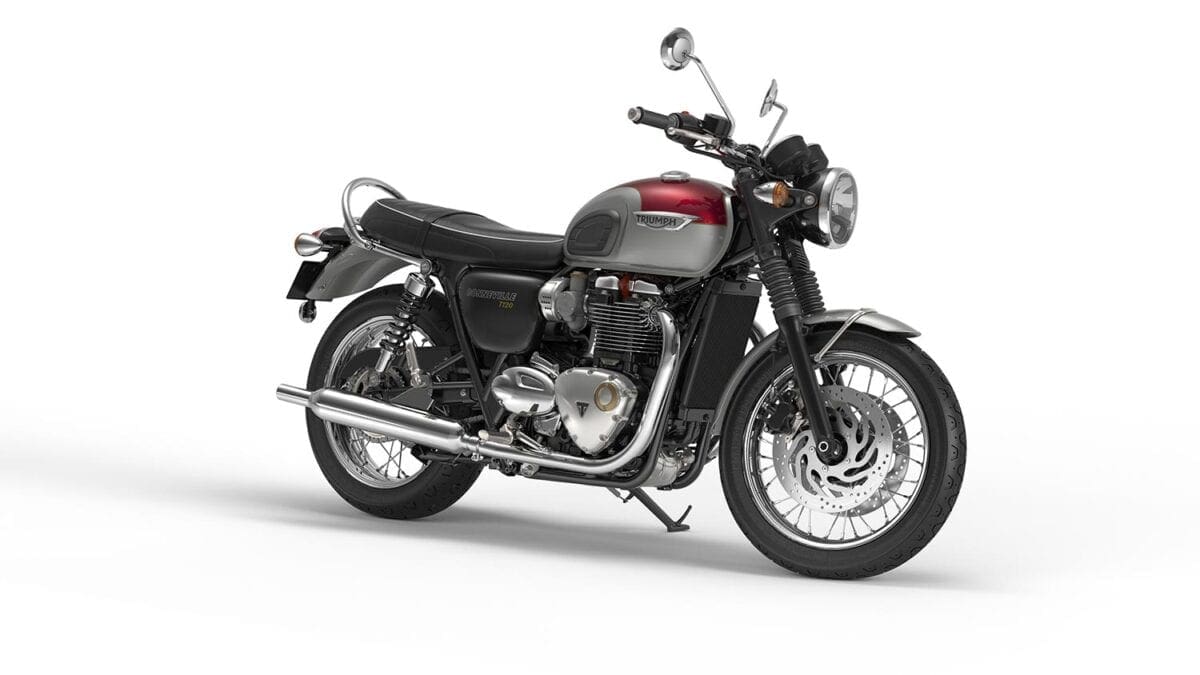