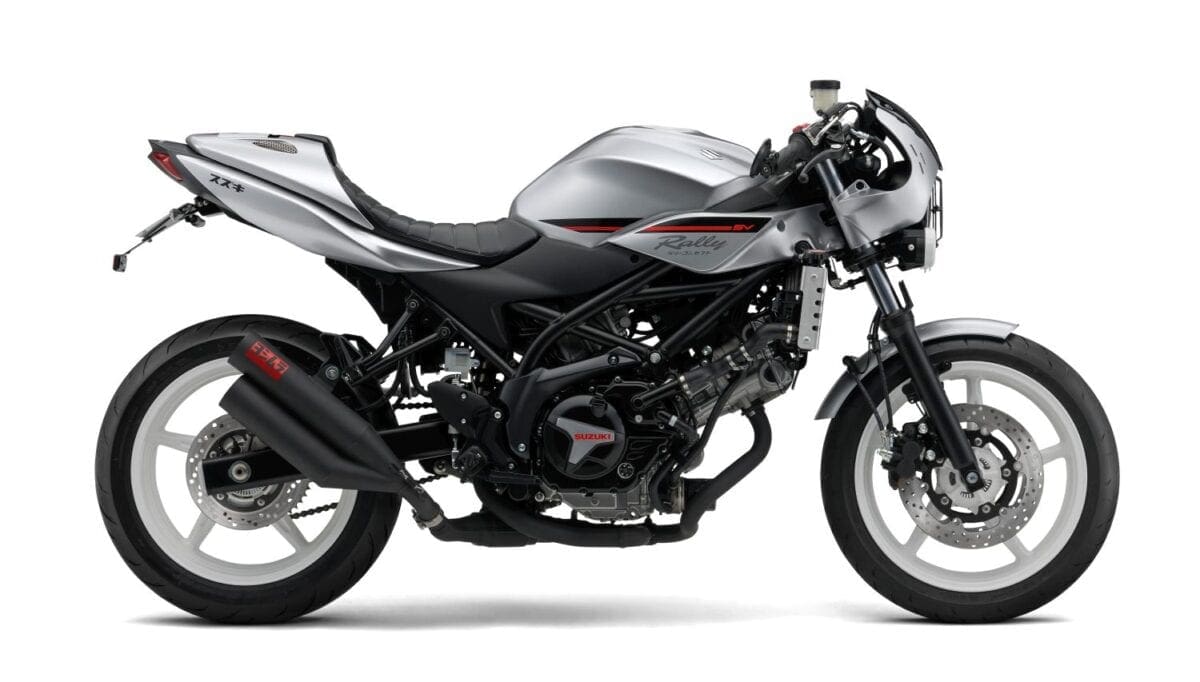 Details of the bike were scarce but the middleweight looked funky enough to get a lot of attention from the attending crowd.

Since then, we’ve been sent a Japanese Q&A with the Suzuki importer responsible for the bike to see what the idea was behind it. Here’s what the Suzuki man said about the Rally Concept, and from the questions dodged it seems as though we’re getting an official, fully-faired, new SV650 in the future:

The product concept is “Café Racer x On Road Rally”. This is one of the street sports model.

We aim to build on Suzuki’s unique sporty neo-retro heritage by blending “pavement rally car in 1970s” and “café racer style” which combines both classic and sport style.

We emphasize the sporty image which the base model originally has and we want to keep the image of the bike as something to ride on both the tight winding roads and in towns too.

We adopted fog lamps which are rare for an on-road model and this model also uses fog lamp covers like a rally car.

This is not really a sporty rocket-type cowl on the front of the bike but we wanted to provide a totally harmonious feeling between the bikini fairing and side cowl. We aimed for the top of the bodywork to look like a traditional rocket-type cowl.

And we adopted single seat cowl like a café racer.

Japanese “Katakana” has been growing in popularity in Europe recently and young Japanese motorcyclists have been accepting Katakana as style of graphic design so we intend to take advantage of our Japanese brand’s strength. The custom model displayed in EICMA also adapted Katakana and it had good response there.

As with the previously named “SV650” models the number means something;

We have no plans to put this model on the market at present.

If this model has good response though, we will consider putting these accessories on sale so that a customer can put one of these bikes together like we have.

The styling design of new SV650, which is the base model of this “Rally concept” is very simple.
This styling has received a good response from the market. But we also would like to show how it is easy to change the image of the model with small number of parts. This is one of our custom demonstrations for after a customer has purchased the new SV650.

All equipped parts are bolt-on parts.

Brake lever and footrests are anodized and machining has been carried out on the clutch cover.

The “tack roll” seat is the same as the seat displayed on the EICMA special bike.

Yes. The quarter fairing is also able to be equipped with standard handlebar.

We cannot answer at this time.