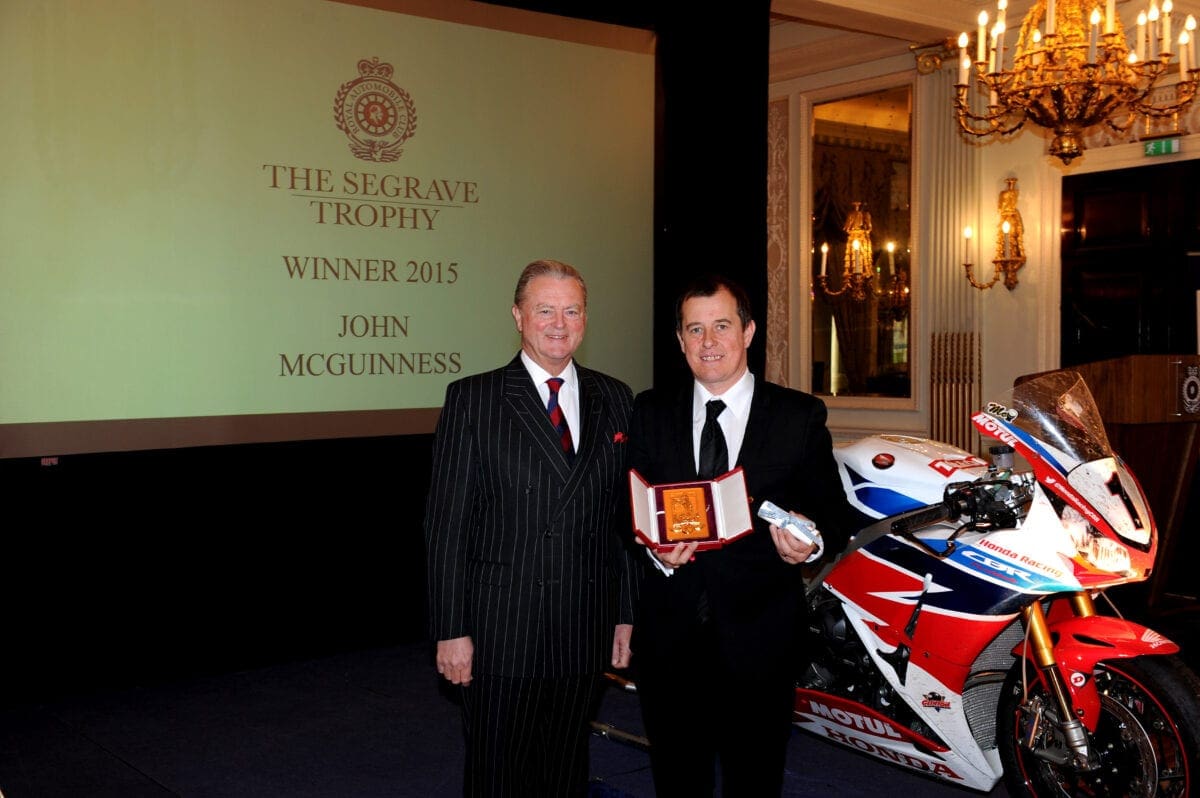 The Royal Automobile Club, today, awarded the Segrave Trophy to Isle of Man legend John McGuinness. Acknowledging the Lancashire man’s success, the citation read: “An outstanding contribution to motorcycle road and circuit racing, including setting the outright lap record at the 2015 Isle of Man TT.  He is the greatest living exponent of the TT, with 23 victories to his name.”
Speaking at the awards Tom Purves, Chairman of the Royal Automobile Club, said: “It is our honour to salute John’s career and his remarkable success, particularly at the Isle of Man TT where he became the first rider to achieve an average speed of over 130 mph and, in 2015, set a new outright lap record of 132.701mph.
“Lady Segrave commissioned the Trophy in 1930, soon after her husband, Sir Henry Segrave died after breaking the water speed record on Lake Windermere. It was her wish that the Trophy would celebrate and encourage those individuals who demonstrated outstanding skill and courage, whether on land, sea or in the air. As one of Britain’s greatest motorcycle racers of his generation, John’s bravery and sheer speed are the exact qualities Lady Segrave wished to celebrate.”
Upon receiving the trophy, McGuinness said: “I’m absolutely honoured to receive this prestigious award. It’s something a little different and I’m definitely in good company when you look back at the motorcycling greats who have previously received this, with the likes of Geoff Duke, Barry Sheene and Joey Dunlop. The award has been running since 1930 and I have massive respect for everyone who has been a part of its history and I am so proud to now have my name alongside some of my heroes.”
McGuinness, also known as the ‘Morecambe Missile’, has bagged multiple successes and set lap records on all categories of machinery from singles, in-line fours and V twins to GP 500 2-strokes. McGuinness also competes in the British Superstock and Supersport series, however, it is at the Isle of Man TT that he has really made his mark within the world of motorcycle racing.
John first visited the Isle of Man in 1982 when he was 10 years old, to watch his father racing at Jurby. He was instantly hooked and during the school holidays he made various trips over to the island on his BMX cycle, catching the ferry from Heysham to Douglas just to spectate.
Several years later, the BMX was swapped for a Yamaha TZ250 with the money made from collecting mussels in Morecambe Bay – it was this bike that started his long career with road racing. Inspired at an early age by Steve Hislop and Joey Dunlop, McGuinness believed that one day he would race alongside them. The dream started to become reality when in 1996, he debuted in his first TT and won the best newcomer award. Three years later he landed his first TT win in the Lightweight 250 category.
In 2007, McGuinness became the first man to break the 130mph barrier over The Mountain Course.

About the Segrave Trophy:
The Segrave Trophy is named after British pilot and pre-war racing driver, Sir Henry Segrave – a man who pushed himself and his machines to the very limit in the pursuit of ultimate speed. He was the first man to hold both land and water speed records, though the latter would cost him his life in 1930. With such drive and determination in mind, the Trophy is awarded for ‘outstanding skill, courage and initiative on land, water and in air – the Spirit of Adventure’.
The first recipient of the Segrave Trophy was Air Commodore Sir Charles Kingsford Smith for his transatlantic and England to Australia flights in 1930. Previous holders of the trophy have included Amy Johnson (1932), Donald Campbell CBE (1958), Sir Jackie Stewart (1973) to Allan McNish (2014). The Trophy is only awarded if the Segrave Nominations Committee judge there to be a suitable recipient that meets the criteria of the award.

The Segrave Trophy has been awarded to eight motorcycle racers including: