Argentine GP: Rossi ‘I had big problems with the rear tyre’ 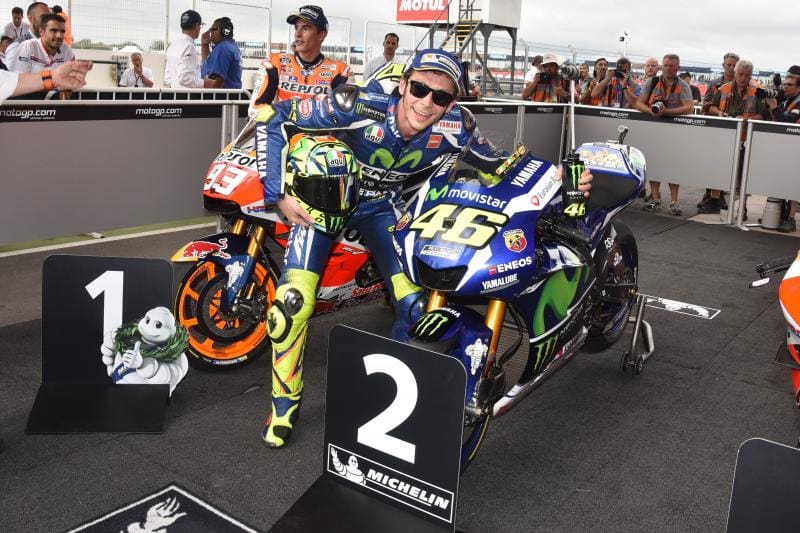 The opening laps of the Gran Premio Motul de la República Argentina had a distinct air of familiarity about them: Marc Marquez (Repsol Honda Team) followed closely by Valentino Rossi. Marquez was unable to shake the determined Italian who remained on his tail until the pair pitted on lap 11 for the mandatory pit stops. Unfortunately Rossi’s race challenge would end here, his second Yamaha M1 not producing anywhere near the same feeling as his first bike, despite the setting being identical. Each Grand Prix motorcycle is a hand craft piece of art, even the smallest of differences having a significant impact on the best riders in the world’s performance.

After the bike change, Rossi found himself in the company of Maverick Viñales (Team Suzuki Ecstar) and the Ducati Team duo. Viñales launch several attacks but Rossi’s experience allowed him to pass the young back, Viñales eventually falling. The attacks didn’t stop as Rossi soon found himself contending with Dovizioso and Iannone, their Ducatis clearly having an advantage on top end speed down the straight. Eventually they broke away and it looked as though Rossi was destined to finish in fourth, until the factory pair crashed and Rossi picked up second. Second in the race also moves Rossi to second in the MotoGP™ World Championship, eight points off the top spot.

Rossi said: “I was very happy to do the second part of the race because I was able to have a good battle with Marquez during the first part when I was strong and we started to overtake, but with the second bike I had big problems with the rear tyre, I didn‘t have any feeling and couldn‘t stop under braking.

“The conditions were very difficult after the rain last night and we were back where we were on Friday when we were struggling quite a lot with our bike, so these 20 points are very important and I‘m very happy for me, Yamaha and all the team because it‘s the first podium of the season, it‘s a good result. I was pushing and very close to the limit. Iannone overtook me a bit too aggressively and in that braking point his action was too strong and it was impossible to overtake so I went wide and he passed me. I said to myself: ‘Now what happens?’ I tried to counterattack, but I didn‘t have enough grip or speed to make a move, so I stayed behind him and when I saw that Iannone tried to improve his position and go under Dovizioso, he unfortunately couldn‘t stop and took out also Dovi, so I was very lucky to arrive in second place.”