Ducati’s MotoGP implosion – how the Italian press sees it… 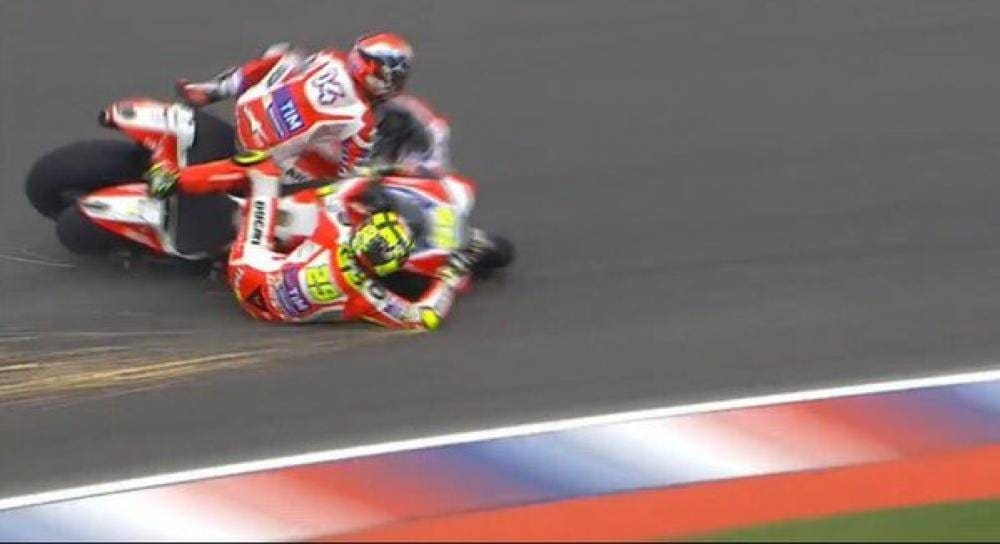 The Italian press is – as you might expect – raging about what happened between Iannone and Dovizioso in the final set of corners at the Argentian GP.

Motociclismo is calling the coming together of the Ducati pair, which left both on the deck and allowed Rossi to effectively cruise to a comfortable second place, a spectacular mistake.

Moto.it has gone much bigger on the clash, filling its space with three damning quotes from the Ducati squad that clearly attack the impulsive Iannone’s lunge underneath Dovi.

Ducati engineer Gigi Dall’Igna is quoted by the Italians as saying: “You have to serve the interests of Ducati!”, Paolo Ciabatti – Ducati team boss – spouting: “You cannot take risks like that to try to pass you team-mate!” and Dovizioso wading in with: “What he did is unacceptable!”

Dall’Igna goes on to explain how he saw the event to the Italian media saying: “There (he turns pointing to the area of the track where the contact was made) a few dozen metres from the checkered flag – we’re second and third – but we didn’t get to the finish line.

“If anyone can win the race then we must try, the same if one can finish second. But if you can not win then you have to settle. This is an individual sport, all the riders are like that, but they should not do what they want to look after their own interests. They must think about the interests of Ducati.”

The Italian press has bagged some choice quotes from both riders too, Moto.it has this from Dovizioso: “It would have been a another second place on a very different type of track and I would have had 40 points and been second in the championship.

“What he did on that last corner is unacceptable. I do not know what he was thinking. I knew going into those corners that he would try an attack and so I pulled the plug and pushed hard, I was too far away for him to pass me but he tried to anyway.

Tough talk from Dovi but Iannone in the Italian press issued a statement saying: “I am very sorry for what happened, I did not want to do this, When these things happen there are few words to say.

“You can see in the footage that I brake at the same point as Dovizioso but I lost the front, perhaps because I was on the tighter line. Of course, I regret that it happened to my team-mate.

“He says that I have not apologised? Certainly I will.” The Italian journalist who bagged the quote from Dovi isn’t so sure that the rider is being entirely honest though – ‘he says those words without being, in truth, too convincing’- is how the writer sums up Dovi’s attitude post race. And as if that’s not bad enough, the Italian press are calling what’s happened ‘Fraticidal’ the death of one brother by another… pretty dramatic.