Welsh GP plans for British MotoGP round look to be dealt a fatal blow, finally. 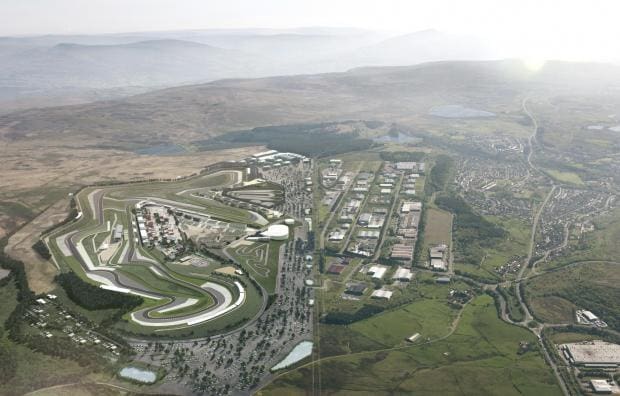 Ok so it looks like the stop/start Welsh GP circuit plans have been dealt a fatal blow with the news that the Welsh government has pulled out of funding the project – so where does that leave things now with regards to the MotoGP round in the UK? And where has the so-far-spent £9 MILLION gone? Who’s got that?

Silverstone is holding the MotoGP round this year and the plan outlined was for the Welsh GP circuit to hold the round next year but this news looks to have scuppered even that most fanciful of wishes. So will the MotoGP hosting duties be played out at Silverstone from now on, Donington or could there even be an outside plan to get the premier class racing at Brands Hatch?

The next few weeks will no doubt see some sort of grand announcement from Dorna about where the travelling MotoGP Brit round will eventually end up but until then here’s the lowdown on why the Welsh government have said a resounding nope to the quite frankly laughable business plans for the project. Here’s the report as was published in the South Wales Argos yesterday which clearly outlines where it’s all fallen down.

THE Welsh Government has announced it has pulled its funding on the Circuit of Wales project.

Economy minister Edwina Hart yesterday announced it would be too risky for the Welsh Government to underwrite Aviva’s entire £357.2 million investment in the scheme.

She also outlined concerns about the viability of the project.

The racetrack, which was set to bring 6,000 jobs to Blaenau Gwent, will not go ahead unless the current investors Aviva are happy to proceed without Welsh Government support. Alternatively new investors would need to be found.

The Welsh Government has already spent around £9 million on the project.

Alun Davies, Labour AM candidate for Blaenau Gwent said a model needs to be found where the risk is shared -which he believes can happen.

He said he is not prepared to “simply read the last rites” on the project and believes the project is still commercially viable.

He said: “The current model sees the taxpayer guaranteeing 100 per cent of the private investment. That risk is too great for Welsh Government.

“We need to find a financial model where risk is shared between the public and the private investors”.

The scheme had been widely welcomed in Blaenau Gwent by residents and business owners and had been called a “matter of survival” by community leaders.

Supporters of the racetrack, which was due to be start being built at Rassau Industrial Estate this April, called the prospect of it not going ahead “deplorable”.

In her letter to the First Minister Carwyn Jones, Ms Hart said: “The final official advice recommends that I should not agree to underwriting the £357.4m Aviva investment in the scheme for two reasons.

“Firstly the significant question around the viability of the project and secondly the unacceptable risk to the Welsh Government of in effect underwriting the entire project.

“These two factors mean that there is both a significant value for money gap and a real legal challenge around issuing such a guarantee.

“Having consistently challenged the commercial and legal advice, which has been provided both from within my team but also from external advisors (PWC and Geldards LLP) and having now seen the final external advice I have reluctantly come to the conclusion that we cannot proceed to issue such a guarantee.

“It is important to remember that this project started as being a one that would be fully funded by private sector risk Capital without the need for a Government guarantee.

“At this stage we made a commitment to part fund the development of the project and agreed to grant aid around £16m towards certain aspects of the Circuit (primarily to support further job creation) on the condition that the project proceeded.

“The final ask of the Circuit of the Welsh Government to underwrite the full value of £357.4 million and also to grant aid £16 million increases our exposure more than twenty times.

“As you will be aware we have been working to support this project for a significant period of time and have already in effect spent around £9m in support of its development. We also explored sharing the risk with several local authorities, and as you are aware that option also failed unfortunately.

“In these last few days we have considered that a guarantee of 80% of the total value of the project may have reduced our risk to an acceptable level, but the Circuit have not been able to secure any real private risk capital and so this option has not been possible.

“As stated above and very reluctantly I think the only conclusion can be to not issue such a guarantee. Having said this, and given our existing substantial investment in the project, it is important that we keep the door open to any new investors who might be able to take this project forward.”

Aviva Investors declined to comment. It is not yet unknown whether they will keep their investment.

Mr Davies said he will be meeting with Circuit of Wales representatives today.

He added: “Blaenau Gwent is a fantastic place to do business. I have been banging the drum for Blaenau Gwent and saying it’s a great place to live and work.

“I believe that the model is commercially viable and we have to find a financial structure.”

Michael Carrick, chief executive of Heads of The Valleys Development Company, said: “We fully recognise and appreciate the support and commitment of The Welsh Government and the private sector partners over many years to get a project as complex as The Circuit of Wales to a point where construction is imminent.

“The Circuit of Wales is a significant mixed-industry development with the potential to deliver widespread regeneration benefits to the South Wales region.

“Many observers near to the site will have noted that the pre-enablement works and ecology activity has already commenced and we have a range of contractors engaged on creating sustainable employment opportunities in this challenged area.

“We respect and understand the minister’s decision on the support for a 100 per cent guarantee for our private funding. While this was our clear preference and reflective of the negotiations we have held over the past six months, we accept that the project will need to progress on revised terms.

“We will continue negotiations with the Welsh Government, the local authorities and Aviva Investors to advance the development on revised terms that will be acceptable to all parties.”

He is now calling on the Welsh Government to publish the advice they received from officials.

He said: “The Circuit of Wales would have secured a much needed boost for the south east of Wales, and could deliver a significant number of good quality jobs.

“But despite having an investor ready and willing to move ahead with the project, the Labour government has bungled the plans and this important regeneration proposal has been scuppered.”

“Clearly the Welsh Government has to be cautious and careful about the money it spends, but it is ironic that in a week where they’ve asked for the UK government to underwrite the future of the steel industry they’re unwilling to back what would be an exciting, flagship scheme.”