MotoGP Wings – to be knifed in the back this weekend in Texas?

MotoGP Wings – to be knifed in the back this weekend in Texas? 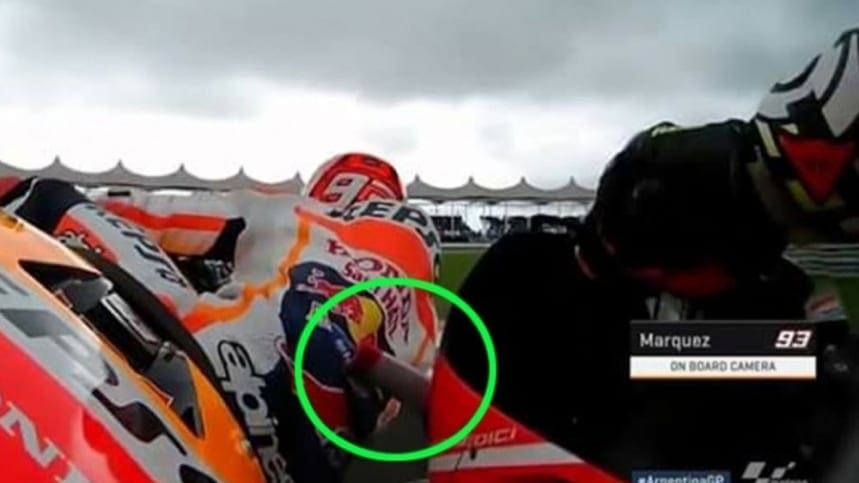 Marc Marquez has said that he and other riders are going to talk to the MotoGP Safety Commission this weekend over whether or not the ‘Wings’ on current machines are to continue – after Marquez was hit in the back with one during close racing last weekend.

The former world champion was smacked in the back and his right side by the left wing on Andrea Iannone’s factory Ducati during the race at Argentina last weekend. The move has caused a huge amount of concern ahead of this weekend’s outing at COTA in Texas.

The Honda man, who has since seen the onboard footage of the collision (pictured above) said: “I’ve seen pictures and it it true that I felt the blow from the bike, but now I realize that my back protector is so protective that it dulled a lot of the impact because now I have seen the hit I know it was pretty hard.”

Marquez went on to say that there were two main issues for the Safety Commission to talk about: “We will be talking about the wings and also about what happened between Dovizioso and Iannone at the last round.

“If they are cleared to be used then because this is racing, and if there is an advantage, then we have to use them. They are already banned in Moto3 and Moto2 and I hope that MotoGP does not go down this route like they have in F1.”

The news that riders are talking to the Safety Commission about this after footage emerged of part of a wing hitting another rider is huge. Potentially, should the wings continue and something worse that an impact on a back protector happens, this could explode as an issue in Dorna and the Safety Commission’s faces.

What could happen is that all wings are taken off the bikes for some or all of the sessions in Texas which start today at 3pm UK time. And if they don’t – if the Safety Commission gives the all clear for a blade of carbon-plastic mix bodywork to stick out from a bike’s fairing like a large flat, dull-bladed knife – then it can’t be long until we’re into full-on Death Race 2000/Road Rash rules in MotoGP. And when that happens our money’s on Crutchlow to be the first to learn to corner whilst swinging a 10lb mace above his head and clearing the way with a variety of hand grenades… Wonder if Ducati will run with large, sharpened wheel spikes in 2017?