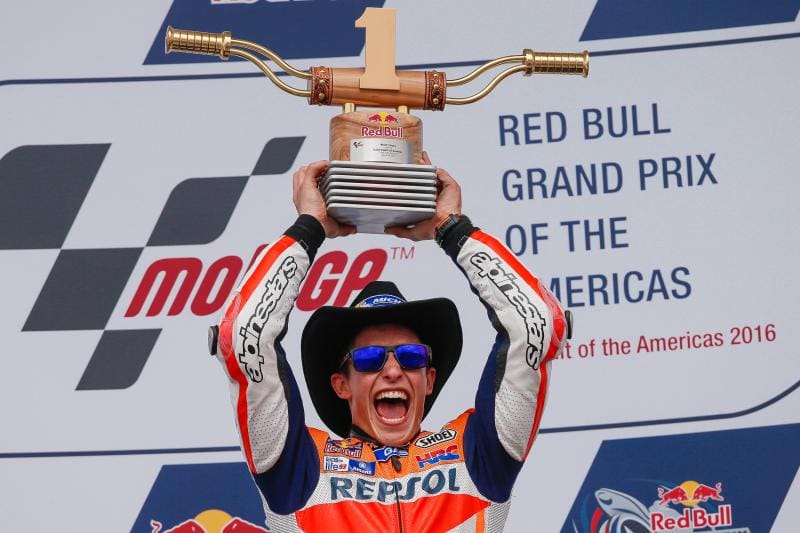 A fourth victory in Austin and an extended championship lead for Marc Marquez after a perfect race in Texas.

For the fourth time in as many races, Marc Marquez started from pole position at the Red Bull Grand Prix of The Americas and everyone expected him to go on and take victory once again. And take victory is exactly what he did, the Repsol Honda Team rider unaffected by a number of crashes behind him as he glided across the Texas tarmac for 21 laps. Although initially challenged by Andrea Dovizioso (Ducati Team) and Jorge Lorenzo (Movistar Yamaha MotoGP), he would lead every lap with ease. His pace was almost always at least half a second faster than that of Lorenzo behind him, eventually crossing the line six seconds ahead of the Majorcan.

On lap 11 came Marquez’s fastest lap of the race a 2’04.682 which would also be the fastest lap of the race overall. For the 52nd time in his career, Marquez stood on the top step of the podium. Of those 52 wins, eight have come from winning in the United States while in the premier class, Maruqez having never lost on US soil. This was also Marquez’s 26th premier class win, moving him ahead of Kevin Schwantz (who helped design the Circuit of the Americas) in the all time winners list. The Repsol Honda Team rider now heads back to Europe with the championship lead, his 66 points putting him 21 clear of Lorenzo. Both Marquez and Honda have certainly come a long way since struggling to ninth in FP1 at Qatar.

Marquez said: “I’m very happy with how the whole weekend has gone. This is a circuit that I like, one of my favourite, but there were some unknowns here because just before the race we decided to run the soft front tyre. In the end the team advised me very well, because the change gave me the good feeling with the bike that I had partly lost in the warm-up. I have to thank them all, as well as the Michelin technician. When I asked, they told me that I would be okay for the first 12-15 laps, and then after that I would have to manage the situation more, which is exactly what happened. We’ve taken another victory here in Austin and are now on a run of four in a row, which is great. In addition, the joy of the team after we won illustrates everything we’re working on. In these first three races of the year, we’ve made good use of the situations that we’ve encountered.”