WSB is getting out and about this weekend at Assen and before it does here’s a wedge of stats and information for you to take in. It’s the sort of stuff that ‘experts’ use to bluff their way through the meeting, so arm yourself with the info beforehand and get the one-up on them. 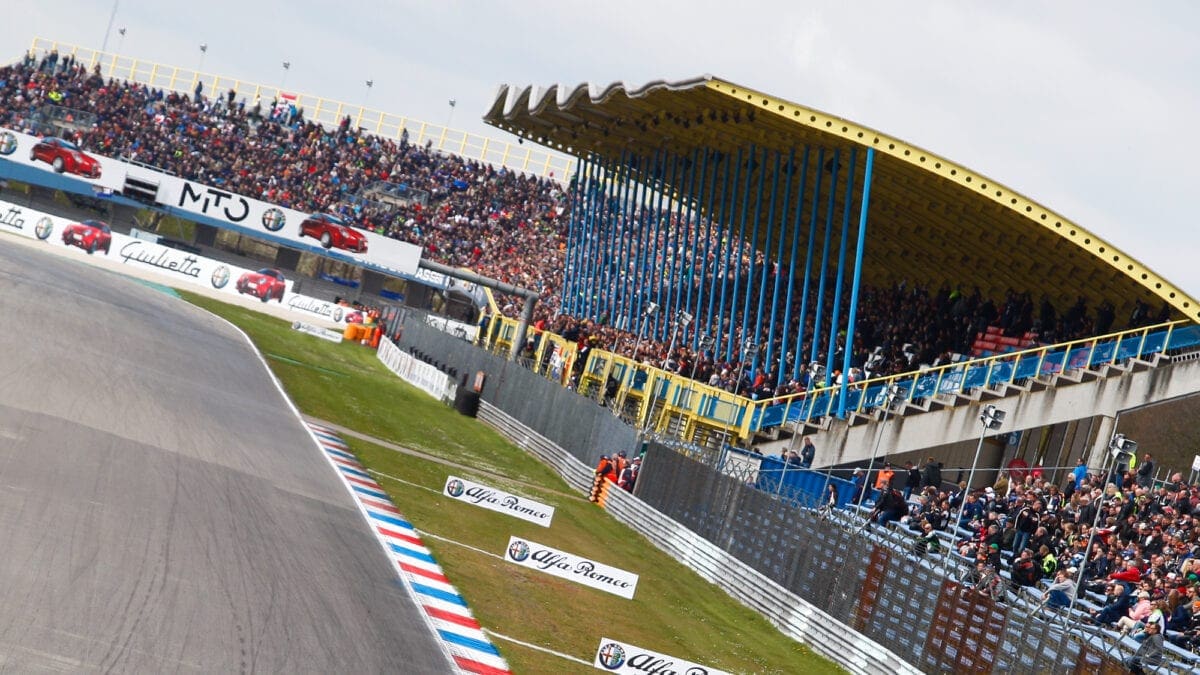 After 25 years on the WorldSBK calendar, Assen is set to become the second track in history to have hosted at least 50 races: Phillip Island is the other, with 51 races started so far at the Australian track. Here we go through the history books and take a look at some of the highlights and most interesting stats ahead of the 25th Anniversary weekend.

With only the sea separating the Netherlands and Great Britain, maybe it comes as little surprise that British riders have conquered exactly half of the races run at Assen: 24 out of 48. A quarter of them were won by only one man, Carl Fogarty: an absolute record for a rider on a given track in WorldSBK history.

Jonathan Rea has the chance to become the second rider in history to have won more than seven races on any given track. After the 12 races won by Fogarty at the Dutch venue, the best value is seven, recorded by Rea at Assen and by Troy Corser at his home track of Phillip Island.

No less than 19 different riders have won a WorldSBK race at Assen. Three of them are World Champions past and present of the 2016 field: Rea, Sykes and Guintoli. Curiously, former double World Champion Troy Corser is not among the aforementioned 19, despite having run 30 races in Assen and finishing on the podium 7 times.

Ten years ago Chris Walker recorded his only career win at Assen: that was the first win for Kawasaki at this track. Walker and Guintoli (2012) are the only ones who have claimed their maiden WorldSBK win at this legendary track.

Some moments in history:

Assen became a part of the WorldSBK championship in 1992, late in the season, on the 13th of September. The first two races were run on the short track and not on the legendary TT track. Doug Polen set pole with a narrow margin on Raymond Roche (0”04), and the American won Race 1.

In the following year, 1993, the race was run on the longer track and it was time for the Fogarty show, who won both races with a considerable margin. In 1994 Fogarty’s performances at Assen improved even further: he set pole with nearly a second (0.95) over the opposition, and duly did the double and set both fastest race laps. His dominance continued to a fourth straight double win in 1996, however in 1997 life was more difficult against John Kocinski (Honda). Assen was the stage of another duel between the two, with Kocinski winning Race 1 and Fogarty Race 2. In the second race, Fogarty was not challenged hard by another Ducati rider, Frankie Chili, who said that he wanted to help Ducati’s cause for the Championship.

Things were different only twelve months later (1998), as Fogarty and Chili went head to head in both races. Chili won Race 1 and in Race 2 they were again head to head on the final lap. When they approached the final chicane Fogarty went for the inside and took the win, with Chili falling. Chili came back in the pits furious and the disagreement continued to the Press Conference.

In 2006 the wet weather played a major role: Corser, Kagayama, Bayliss and Haga all fell while in the lead or just behind the leader, leaving a determined Chris Walker the chance of his life to take his single WorldSBK victory. In Race 2, which was dry, contact at the first turn between Corser and Haga cleared the way for Troy Bayliss, who won with a safe margin over Andrew Pitt.

In 2007, a wrong tyre choice by Bayliss meant that he was cut out of the fight for the win, and since he was the only one able to keep up with Toseland, this meant the Briton won with ease. The first laps of the race were something to remember however, with six riders fighting for the lead.

Race 2 was WorldSBK at its best: in the first laps Haga, Bayliss and Toseland fought for the lead, then Haga fell victim of a mechanical issue and Bayliss tried to pull away. Toseland let him go, only to catch him in the final laps. The last two laps were incredible: Toseland and Bayliss swapped positions four times on each lap, with Bayliss able to pip the Brit only at the last chicane, when he took a better line and won by only nine thousandths of a second.

In 2010, Jonathan Rea opened his account of pole positions at Assen, winning twice for the home team, Ten Kate. The second race was a Superbike classic: seven riders were able to fight for the win, passing each other at every corner, so that it was almost impossible to keep track of the position changes. Only on the sixteenth lap was Rea able to make the decisive move on Haslam at the first turn, pulling away from his rivals.

The first race in 2012 was one of the most chaotic ever seen: the start saw lights out under a dark sky and lots of wind. Sykes was able to keep the lead from pole at the start, in front of Rea, Checa and the BMW pair Melandri and Haslam.

The situation changed dramatically on the twelfth lap, when a water leak from Sykes’ bike created mayhem around him. Sykes noticed it and slowed down, but Haslam waved his arms at him, asking him to stop. Then rain started to fall, and the race was red-flagged. The riders lined up for a second start for a reduced race of nine laps: Melandri was on pole, alongside him Guintoli, while the third grid spot was empty as Smrz started from the pits.

After a few turns, Rea fell, leaving Haslam in the lead, but his compatriot was able to run only two laps out front, carving a huge margin of eight seconds, before falling himself. The lead was inherited then by Checa, followed by Badovini and, further back, Biaggi. But soon Biaggi was passed by Guintoli, who was only eighth after the start. Guintoli was however able to take his maiden win before Giugliano, who took his maiden podium. Checa completed the Ducati sweep in third place after the chaotic race.

Conditions changed for Race 2: the sun was out, but the track was still damp in some parts and the race was declared wet. This made tyre choice incredibly important and saw Rea eventually emerge victorious, over Race 1 winner Guintoli.

2015 saw Michael van der Mark take the first two podiums for the Netherlands at his home track, riding as a rookie and reigning WorldSSP Champion, as Rea took the double win and furthered his advantage in his title winning year.