This Saturday at Stafford: Barry Sheene’s 1975 Daytona crash helmet (yeah, that one, the smashed up one) is up for auction for £4k

This Saturday at Stafford: Barry Sheene’s 1975 Daytona crash helmet (yeah, that one, the smashed up one) is up for auction for £4k.

How do you fancy owning the most famous crash helmet in the motorcycle universe? Well you can do just that if you bid on Barry Sheene’s 1974 Bell racing helmet – the lid he wore during the 1975 Daytona crash that nearly took his life, arguably the most famous racing motorcycle crash of all time. The lid is going up for auction at the 36th Carole Nash International Classic Motorcycle Show this weekend.

The helmet is painted in black, red and gold with applied number ‘7’, ‘Bell’ and ‘Anderstorp Racing Club’ logos, decorated with trademark ‘Donald Duck’ emblem and ‘Barry Sheene’ lettering to rear, with tinted visor and chin-guard with Sheene’s trademark cigarette hole, applied SHCA certified sticker number 1372063, race worn with evidence of crash damage to the rear and loss to interior lining. 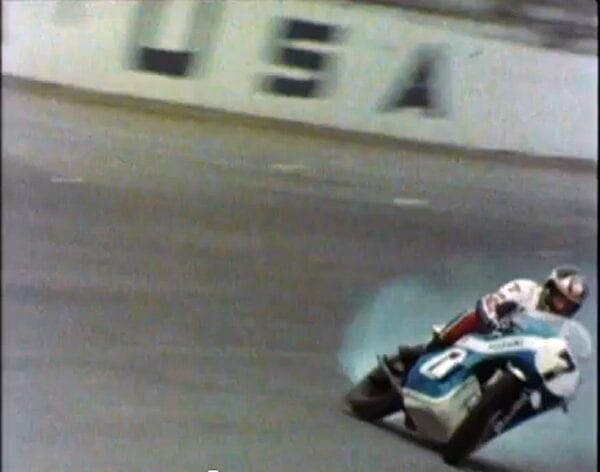 The first to carry his famous number ‘7’, this helmet was presented by Barry in 1975 to Merv Wright, Suzuki race-team manager, as being the one he wore in his infamous Daytona crash of that year. He also wore it whilst riding for Suzuki at various races during the 1974 season, including the Daytona 200. Sheene also wore it during the 1974 Swedish Grand Prix where he had a spectacular spill in the rain, taking out Giacomo Agostini and gathering the visible ‘scars’ to the back of this helmet.

The lid will be sold displayed on a presentation base with plaque under a Perspex case and all the paperwork necessary for authentication of the helmet.

There is a reserve price of £4000 to £6000 on the helmet and the auction will be held this coming Saturday at the Stafford show. The auction starts at 1pm prompt so make sure you get there early to be in with a chance of owning the most famous crashed helmet ever. To find all the details about the show click HERE.

Here, just in case you’ve never seen it before, is the crash that Barry had at Daytona whilst testing: