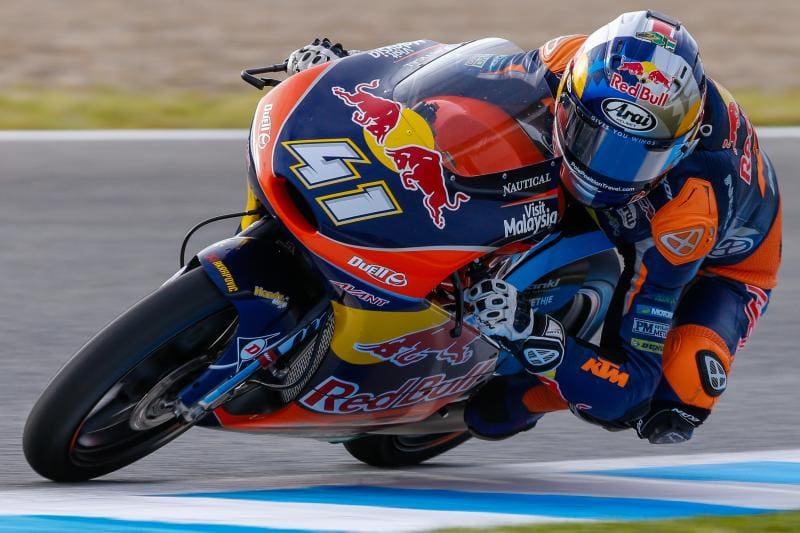 An impossible charge through the field saw Binder take his first World Championship victory from Bulega and Bagnaia having started last.

Drama began even before the Moto3 World Championship lined up on the grid as Brad Binder (Red Bull KTM Ajo) was sent to the back of the grid, moving every rider up a position on the grid. The penalty came as the result of a mapping infringement, the South African’s KTM was found to be using non-homologated ECU software after Qualifying.

With the morning fog gone and the championship leader starting last, it was set to be as thrilling a Moto3 battle as ever. Nicolo Bulega (Sky Racing Team VR46) lined up in pole ahead of Jorge Navarro (Estrella Galicia 0,0) with Francesco Bagnaia (Aspar Mahindra Team Moto3) moved onto the front row due to Binder’s penalty. Conditions were ideal, the track at 26°C and ambient temperature at 18°C. Jules Danilo (Ongetta-Rivacold) was the only rider to deviate from the medium front and rear tyre trend, the Frenchman running a soft front.

Excitement continued to build as riders revved their engines, the 35-rider field lurching forward as the lights went out. From third Bagnaia made a great start on his Mahindra to lead into Turn 1. Meanwhile the drama continued as Niccolo Antonelli (Ongetta-Rivacold) was forced to start from pit lane due to an issue on the grid. Further down Binder quickly picked his way through the field.

Turn 6 claimed both Fabio Quartararo (Leopard Racing) and Jorge Martin (Aspar Mahindra Team Moto3) on the first lap, both riders rushing to their bikes. Meanwhile Jorge Navarro had taken control of the race with ‘Pecco’ Bagnaia tucking in behind him in an attempt to break away, but fellow Italian Bulega loomed large behind them. This small group began to quickly open a gap, a second ahead of Romano Fenati (Sky Racing Team VR46) as they started lap three.

The start of lap three also saw Binder inside the points, the South African having forced his way up to 15th from 35th in just two laps. Binder rapidly closed on the group battling for fourth, setting a 1’46.922 on lap four, while the leading trio continued to press their advantage. All three remained calm and in line, working hard to open up a large gap and ensure their fight would be one for victory.

It was all calm until with 18 laps to go Bulega took control of the leading group, sliding up the inside of Navarro and tightening the three up again. But Bulega’s size worked against him, Navarro taking the lead back at Turn 1 the following lap. The battle at the front was exciting, but Brad Binder’s charge was awe-inspiring as the South African was inside the top ten after just six laps. Almost every corner offered Binder another chance to gain a place, slipping through with ease.

Before even a third of the race was gone, Binder was fourth and leading the chasing group. Could he defy the odds and claim victory from the back of the grid? He had 15 laps to close the 3.7-second gap, fighting at the front helping him immensely. The leading three lapped in the low 1’48s while Binder produced a steady flow of mid 1’47s.

Turn 6 was the stage for a number of attacks at the front, the long straight before hand giving Navarro and Bagnaia the chance to get past each other. Unfortunately fighting on lap 11 allowed Binder to close an entire second, just 1.5 seconds behind a podium finish.

As the laps ticked down, so did the gap to the front and soon Binder was involved in the podium battle, moving to third at Turn 1 on the 14th lap. Not long after Binder would move into second as Bagnaia ran wide at Turn 1. The leading group gathered together once more, but it didn’t worry the South African as he pushed his way into the lead at Turn 6 on lap 18.

Clear track ahead, Binder began to open up a lead as Navarro and Bagnaia diced for second. As the final three laps began Binder had a one second lead over second, still lapping in the mid 1’47s. The Red Bull KTM Ajo rider was gone but the fight for second was fierce as Bulega struck at Turn 6, slamming his way into second but Bagnaia and Navarro responded. All three traded places and it all came down to the drag to the line after an incredible move by Bulega into Turn 13. It was enough to ensure Bulega took second and thus a debut podium with Bagnaia taking his second podium of the year with third.

The gap would grow to an unbelievable 3.4 seconds as Binder became the first ever South African to win a lightweight class race. With his first victory, Binder extended his championship lead to 15 points over Navarro.

Jorge Navarro lost out on the podium in the final corner, forced to settle for fourth. Jakub Kornfeil (Drive M7 SIC Racing Team) would eventually win the battle for fifth.

There were a number of falls throughout the race with Andrea Locatelli (Leopard Racing), Hiroki Ono (Honda Team Asia) and Karel Hanika (Platinum Bay Real Estate) all going down together on the third lap. Aron Canet (Estrella Galicia 0,0) was in contention for the top ten until he fell at Turn 1 on lap six.

John McPhee (Peugeot MC Saxoprint) fell at Turn 2. Several laps later Niccolo Antonelli would also fall, but at Turn 8 as he attempted to recover from his pit lane start.

Round five happens on the sixth of May at the Monster Energy Grand Prix de France in Le Mans.