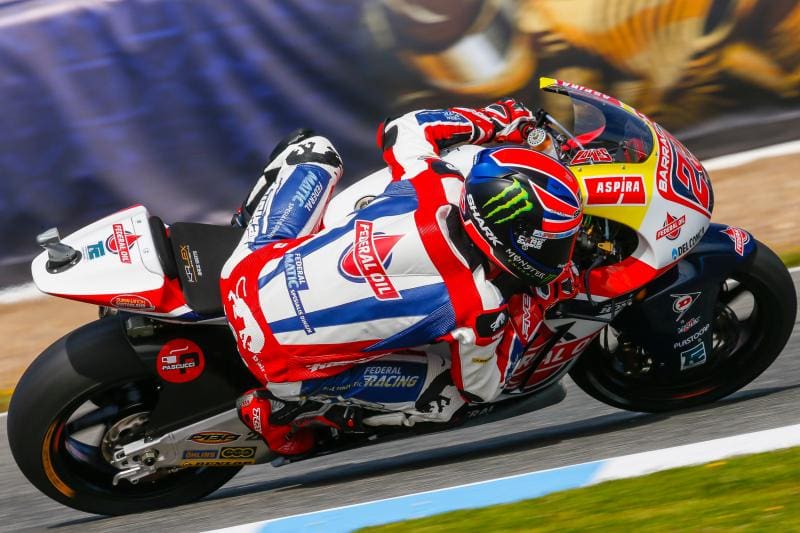 He may have had to fight in the opening laps, but once Lowes was ahead he was untouchable. Folger and Rins joining him on the podium.

The sun blazed down on the thousands of fans gathered at the Circuito de Jerez to witness the Moto2 World Championship race at the Gran Premio Red Bull de España. It was a reduced grid as both Julian Simon (QMMF Racing Team) and Edgar Pons (Paginas Amarillas HP 40) withdrew from the race on medical grounds. All riders, aside from Alessandro Tonucci (Tasca Racing Scuderia Moto2) chose to run the medium front and hard rear tyres.

At the head of the grid Sam Lowes (Federal Oil Gresini Moto2) remained focused on the task ahead, the Brit knew he had the pace to win but had crashed several times throughout the course of the weekend. With a number of his title rivals such as Alex Rins (Paginas Amarillas HP 40) and Johann Zarco (Ajo Motorsport) starting outside the top six, the scene was set to opening up his championship lead.

Red flag removed and lights out, Jonas Folger (Dynavolt Intact GP) shot off the front row of the grid to grab the holeshot into Turn 1. There were a number of moments behind but everyone made it through the first corner safely. Xavi Vierge  (Tech 3 Racing) and Ratthapark Wilairot (Idemitsu Honda Team Asia) had a heavy fall at Turn 5, but the racing continued. The pair was taken to the medical centre where Wilairot was diagnosed with cranial trauma and taken to a local hospital.

Folger continued to up the pace, Simone Corsi (Speed Up Racing) unable to match the speed and sliding off at Turn 2. Try as he might, Folger was unable to hold off Lowes who took the lead midway through lap two. From seventh on the grid, Rins made the start he needed and put a hard move on Franco Morbidelli (Estrella Galicia 0,0 Marc VDS) to get up into third. Unfortunately Zarco did not make as strong a start and was battling down in 12th in the opening laps.

The leading four were all within touching distance, Lowes unable to shake off Folger as they traded fastest sectors. Their speed was brutal and the top three opened up a second leader over Morbidelli. Lap times were quick but the conditions caught many out as Alex Marquez (Estrella Galicia 0,0 Marc VDS) crashed early at Turn 2. Luca Marini (Forward Team) slid off at Turn 13 at the end of lap four and Sandro Cortese’s (Dynavolt Intact GP) front row start ended in the gravel at Turn 2 on lap five.

Danny Kent (Leopard Racing) crashed and remounted at Turn 6 as Axel Pons (AGR Team) was another victim of Turn 13. All of these falls occurred within the first six laps, the conditions slightly cooler than in Qualifying and proved difficult.

No such issues for the leading three as they maintained their pace in the mid 1’43s, Rins just dropping back slightly as the race crept towards half race distance. Morbidelli was having a lonely ride in fourth, but fellow Italian Lorenzo Baldassarri (Forward Team) was steadily closing the two-second gap.

Having worked on used tyres for the majority of Free Practice, many were expecting Alex Rins to be strong towards the end of the race but as the laps went by, the Spaniard dropped further back. With 16 laps remaining, Lowes and Folger had opened up a second on the local rider and looked set to decide victory between them. The German and the Brit were taking radically different lines around the Jerez circuit, but the gap remained constant.

By lap 13 Baldassarri was with Morbidelli and fighting for fourth, the Forward Team rider waiting for his chance and spending several laps behind him. Morbidelli would respond and up his pace to open up a half second advantage over his compatriot.

Lowes continued to push ahead at the front of the race, his Kalex bucking and weaving underneath him as he extended his advantage over Folger to near a second on lap 17. Each time Lowes had a moment, Folger would up his pace and continue pushing the Brit in an attempt to push him over the limit. But Folger’s attacks would work and soon Lowes opened up a lead of over a second and a half, the Brit just needing to remain upright for the final six laps.

Further down the order there were great rides from the likes of Miguel Oliveira (Leopard Racing) who battled with Tom Luthi (Garage Plus Interwetten) for sixth, the pair ahead of Zarco. After a challenging start to the race, Zarco found his rhythm and was able to get inside the top ten. Disaster struck for Oliveira on lap 21 as he slid off at Turn 4, his bike tumbling through the gravel trap.

Zarco eventually got past Luthi to move into sixth with four laps to go, the leading five too far ahead for even the reigning Moto2 World Champion. But Zarco would benefit from a late fall by Baldassarri, the Frenchman promoted into the top five.

The last lap began with the podium set in stone, Lowes crossing the line over three seconds ahead of Folger for his first win of 2016 and just the second of his Moto2 career. Alex Rins would complete the podium with a steady ride to third position. Unfortunately Rins encountered problems on the cooldown lap and had to ask Zarco for assistance in getting back to the pits.

After the pressure of Baldassarri, Morbidelli took his best race result of the year with fourth ahead of Zarco.

Victory is exactly what Lowes needed, the Brit extending his championship lead to 10 points over Alex Rins. Johann Zarco takes third with 56 points, 16 behind Lowes. Folger, who took his fifth podium in six Jerez visits sits fifth with 47 points.

The Monster Energy Grand Prix de France will host round five of the Moto2 World Championship on May 6.