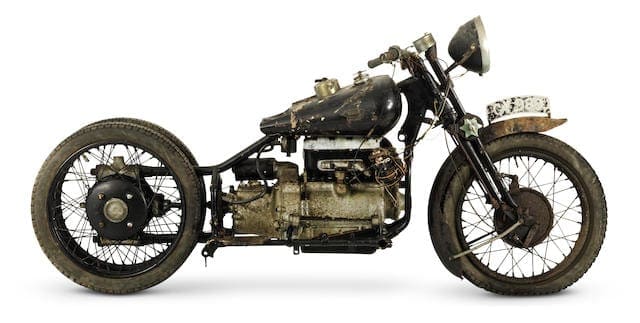 Bonhams Stafford Sale set a new world record price for a Brough Superior and for any British motorcycle sold at auction, as the gavel fell at an astounding £331,900 for the 1938 Brough Superior 750cc BS4 at the weekend.

The BS4 was the highlight lot in the collection ‘The Broughs of Bodmin Moor’, which sold 100% to achieve a collective £752,625. These iconic, rare British motorcycles were believed to have been destroyed, until Bonhams motorcycle department discovered the eight machines in 2015 in a remote Cornish village. The motorcycles were discovered whole, in parts, and some were partially submerged under decades of dust, old machinery parts and household clutter. Bonhams Stafford sale saw the bikes unveiled for the first time in more than 50 years.

Motorcycles of the 1920s and 1930s largely featured only one cylinder, so when the BS4 launched at the Olympia Motor Cycle Show in 1931, with its engine and gearbox taken from an Austin 7 motor car, it was truly revolutionary for the marque. Only ten BS4 models (aka Brough Superior ‘four cylinder’) were built, and only seven survive.

Ben Walker, International Director for Bonhams Collectors’ Motorcycle Department, said: “The Broughs of Bodmin Moor are the motorcycle discovery of the decade. They’ve caused quite a stir in the saleroom, with each one far exceeding estimate, allowing us to break our own world record for a British motorcycle sold at auction, the 1938 Brough Superior 750cc BS4 selling for £331,900 to a German bidder in the room.”

“Having been housed in a Cornwall barn for so many decades, we’re delighted to have brought these machines back into the spotlight,” said Jonathan Vickers, Bonhams West Country motoring specialist.

Malcolm Barber, Bonhams Co-Chairman and auctioneer, said: “The Bonhams team have held an auction at the Stafford International Motorcycle show for more than 28 years. The sale is an institution, and one that rightly attracts the attention of motorcycle enthusiasts from across the globe. With a packed saleroom and bids coming in internationally  including a determined bidder who flew in from the antipodes  and several world records achieved, such as for the 1956 Vincent 499cc Comet Series-C/D which sold for £55,200, as well as of course for Brough Superior, it’s been yet another incredible Stafford Sale.”

The Bonhams Sale featured the best of British motorcycles, with Vincent, Coventry Eagle, and of course the rarest of Brough Superiors leading more than 230 machines to achieve a total £3,454,501.