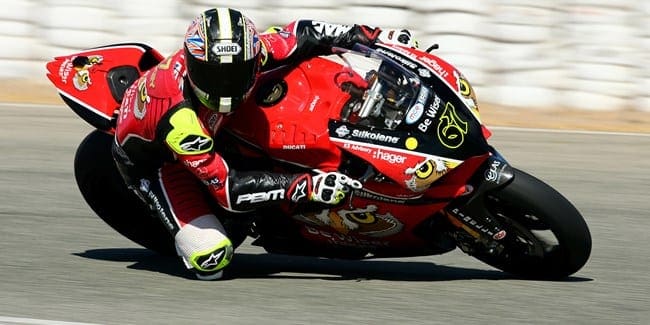 The 2016 MCE British Superbike Championship heads to Oulton Park this weekend for round two and after an intriguing season opener at Silverstone three weeks ago, predicting an outcome is anyone’s guess.

Shane ‘Shakey’ Byrne (pictured above) currently leads the standings after a brace of second places and it’s a landmark weekend for the quadruple champion as he’ll line up for his 300th race start. And the Londoner, who last won the title in 2014, is keen to take his first win of the season on the Be Wiser Ducati.

The PBM team opted out of the official BSB test at Oulton, preferring instead to go to Knockhill and with the weather in Scotland highly favourable, both Byrne and team-mate Glenn Irwin enjoyed a solid day’s work.

Byrne said: “We had a really positive test last week at Knockhill and the conditions there were certainly among the best I’ve ever seen at Knockhill; in fact I don’t really think it could have been any better! I am getting closer and closer with the bike and we need to remember exactly how young this whole project really is. We need to be able to walk before we can run; things will definitely improve for us as the season progresses and we understand the bike more and more.”

Haslam said: “The official test went really well; I haven’t been to Oulton Park for seven or eight years, so I was able to get used to the track again in the morning and then work through a lot with the chassis and the power delivery. I am pretty happy that we have adapted our set-up for this circuit and to end up fastest definitely put a smile on my face going into the race next weekend.”

Iddon’s strong early season form confirms what many of us thought in that he’s very much one to watch this season whilst Luke Mossey, fifth at the Oulton test, will also be in the mix come race day. And Linfoot again proved that the Honda will again be competitive around the Cheshire venue.

Race two winner at Silverstone Peter Hickman will be looking for a repeat performance whilst one rider who deserves a mention is Lee Jackson on the Buildbase BMW. The 20-year old’s results seem to be going under the radar somewhat but he’s establishing himself as a consistent top ten finisher and is edging ever closer to becoming a top six regular.