Lorenzo: “Everything has been almost perfect!”

Lorenzo: “Everything has been almost perfect!” 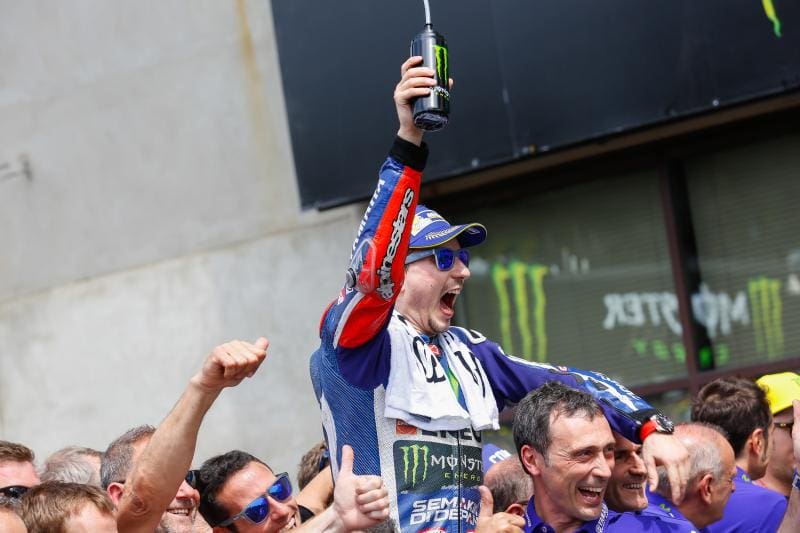 Jorge Lorenzo started the French GP from pole, led every lap across the line and went on to win by 10.6s to retake the championship lead.

Lorenzo started the 28-lap French GP exactly as he had planned. As the lights went out he had a lightning start from pole position and took the holeshot to open up a 0.4s lead after the first lap. Followed by the Ducati Team duo of Andrea Iannone and Andrea Dovizioso, he put his head down and dropped quick laps to keep a consistent gap of little more than half a second until, with 23 laps left, it was time to put the hammer down.

With a clear track in front of him and behind him, the triple MotoGP World Champion rode consistently fast lap times in the 1’33s to manage the gap to his pursuers that had already grown to more than two seconds.

Lorenzo was in a league of his own and remained unchallenged for the rest of the race. Leading the race from start to finish, the freshly turned 29 year old marked his birthday by securing a perfect victory, with a more than ten second margin, and to top off the celebrations he also took over the top spot in the championship standings.

Lorenzo now leads Marc Marquez (Repsol Honda) by five points heading in to round six of the 2016 MotoGP World Championship in Mugello, the Gran Premio d’Italia TIM, which takes place from the 20th to the 22nd of May.

He said: “I‘m very happy with this victory, because everything has been almost perfect. In the race I knew Marquez had the chance to fight for the victory with me, or if he wasn‘t very fast, he would have been second or third and that would have meant he would still have kept his first position in the championship, but he crashed. Now in the championship three riders scored zero or very little points in one race, so in some way we are starting the championship from zero again after those races, but with us being five points ahead.”