So where are these FOUR new Street Triples we uncovered? When are we going to see them?

So where are these FOUR new Street Triples we uncovered? When are we going to see them? 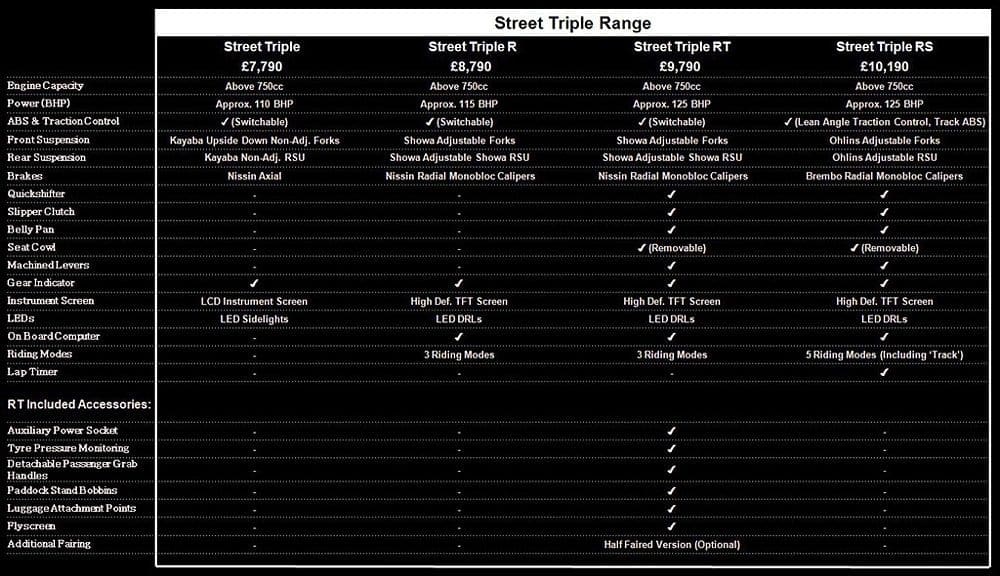 So now the big motorcycle shows are out of the way it’s time to take stock about one raft of motorcycles that we know are coming – and didn’t appear at either the German, Italian, American or British motorcycle shows. The new range of Street Triples.

Above is an official document from Triumph that we revealed to the world back in May. When we showed the world this information it put to bed many rumours about what we’re getting from the British firm in the Street Triple range – but so far not one of the FOUR different models above have appeared.

And that’s got us wondering why, especially given the sales success of Yamaha’s Tracer range (there is a very direct competitor to the Tracer in the new range of Street Triples as you can read about, below).

All bikes are classed as ‘over 750cc’ which tallies with the theory that the next bike is actually going to come out around the 800cc mark. While the basic model puts out 110bhp, the R model makes 115bhp, the RT and RS up the power to 125bhp. All the bikes have switchable ABS and they all come with traction control. On the RS the traction control monitors lean angle and this model also comes with track-ready ABS.

The instruments are taken care of with a a TFT screen on the top three models, on the basic bike it’s a LCD set-up. Three riding modes are available on the R and the RT but the top-end RS has five riding modes (including ‘Track’) in a similar set-up to the 2016 Speed Triple.

Also in the document is outlined the spec level for the RT. That bike gets a power socket, TPMS system, detachable passenger grab rails, paddock stand bobbins, luggage attachment points, flyscreen and is even going to come with an optional half fairing. Effectively then, the Street Triple RT is going to be a Tracer-style bike from Triumph targeting the MT-09 powered Yamaha Tracer currently on sale.