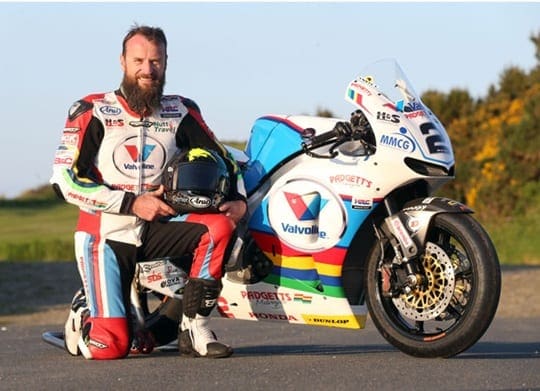 Monday night’s evening session at the 2016 Isle of Man TT Races fuelled by Monster Energy got underway promptly at 6.20pm with dry, sunny conditions all round the Mountain Course and the Bingley Bullet Ian Hutchinson continued his excellent form by setting the fastest time of the night with a speed of 129.964mph on the Tyco BMW, two seconds quicker than Michael Dunlop although the latter posted three laps over 129mph.

However, one of the most impressive feats of the night came from Bruce Anstey who, after one sighting lap on his Valvoline Racing/Padgetts Honda Fireblade, switched to the hugely anticipated RCV213-V Honda MotoGP replica and recorded a speed of 127.071mph.

The evening saw the 1000cc machines take to the course for the first time and all of the leading competitors took advantage of the excellent conditions.  Anstey and Michael Rutter lead the field away down Glencrutchery Road followed by Hutchinson and Peter Hickman, Gary Johnson and James Hillier, Lee Johnston and Martin Jessopp, Dan Stewart and David Johnson and Dean Harrison and Cameron Donald, the latter the only rider to go out on his 600cc mount on the opening lap although the Australian was reported as an early retiree at Quarter Bridge.

Hutchinson, Hickman, Johnson, Dunlop and Harrison all pulled in as did Anstey who had a relatively slow lap at 117.828 but the Kiwi was soon back out, this time on the RCV213-V Moto GP replica machine. Ian Lougher was an early retirement on the Suter at Glen Darragh although the Welsh rider later completed a lap of 115.248 (19:38.571) on the two stroke Suter Racing machine.

McGuinness, Rutter, Hillier and Mercer had continued straight through for their second lap and Rutter was first to complete the lap at 127.031mph but McGuinness was faster, his speed of 128.871mph sending him to the top of the leaderboard. Hutchinson quickened his pace second time around to 126.470mph with Conor Cummins not far behind at 125.905mph.

As the session wore on, the majority riders swapped between their Superbike and Superstock machines and Dunlop’s fourth lap on his Superbike saw him lap at 129.497mph but Hutchinson went quicker at 129.96mph. Harrison jumped to the top of the leaderboard in the Superstock class at 128.044mph but Anstey was quickest through the speedtrap at 193.4mph on the RCV. With his second lap being a hugely impressive 127.071mph, he went quicker still on his third lap with a speed of 127.071 (17:48.916).

Having had a lengthy session on Saturday evening, not many riders opted to take out their Supersport machines and Harrison was again quickest, as he had been in Saturday’s opening session, with 124.461mph followed by Lee Johnston, who completed his first laps having broken down on Saturday, with 122.067mph and Mercer at 122.067mph.

Karl Foster was reported to have sustained ankle and wrist injuries in an accident at the 32nd milestone and was taken by airmed to Nobles Hospital.

Tomorrow’s qualifying session is scheduled to get underway at 18.20