How about this for a Japanese inside-the-factory scoop then?

This is a news story that’s appeared on the the cover of the latest issue of the Japanese magazine Autoby.

In the story the Autoby journos talk about the upcoming Kawasaki Versys 250 Adventure-style upright that we told you about in January this year but alongside it is the updated image (based on the info they’ve got) of the mini- Suzuki V-Strom 250 that we know is coming – and told you about last October.

What makes this latest story interesting though is the pretty significant change in look for the little Strom, called the GSR250XT by the magazine. Gone is the beaky look that the original info coming out of Japan had pegged for the quarter-litre, 2017 Adventure bike to be replaced by a much more snub-nose look.

Both bikes are expected to be part of the respective factories line-up for next year based around current tech. 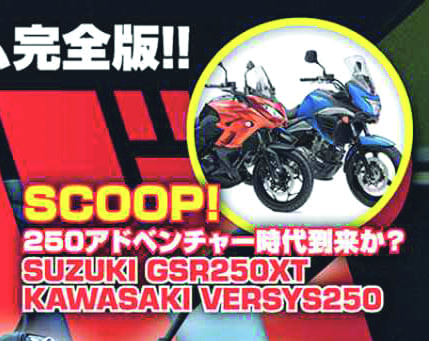