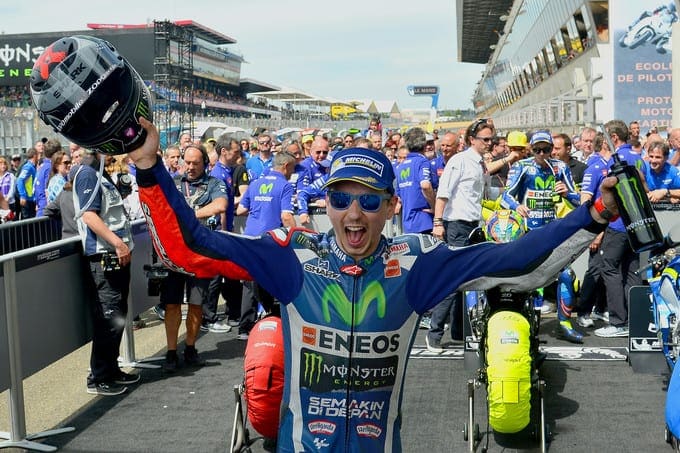 The prize draw winner will receive two tickets to Silverstone MotoGP on Thursday 1 September and a five-minute meet and greet with Lorenzo in the SHARK race truck. They will also be able to have their Race-R PRO helmet signed by Lorenzo.

To be in with the chance of winning, race fans must complete two simple steps: buy a Race-R PRO Lorenzo Replica at an affiliated participating dealership and then email a photograph, scan or copy of their receipt to Lorenzo@shark-press.co.uk.

The prize draw is open to anyone who purchases, or has already purchased, a SHARK Race-R PRO Lorenzo Replica from an affiliated participating dealer and submits their receipt before Monday 1 August 2016. To locate your nearest dealer, visit www.nevis.uk.com or call 01425 478936.

Adorned with Monster Energy logos and featuring Lorenzo’s ‘Por Fuera’ (‘On the outside’) personal logo on the top, the Race-R PRO Lorenzo is eye-catching in its design, while packing in all the features of a helmet developed in conjunction with SHARK-supported riders to meet the demands of top level racing competition: lightness, stability, comfort and ventilation.

The Race-R PRO is constructed from carbon aramid fibre and features a double blade spoiler to aid high speed aerodynamic force. Crystal clear visibility is achieved thanks to the optical class one visor with variable density –  the visor is 2.8mm around the edges and 4.25mm in the centre – which offers near perfect optical quality.

The visor has a patented four anchor point visor safety lock and is treated with an anti-scratch treatment outside and an anti-fog treatment inside. It fastens securely using a double D-ring strap and tucks away using a magnet. The helmet features a quick release visor system and the interior is removable and washable. The Race-R PRO is acknowledged as one of the safest helmets on the market with five stars in SHARP testing.