Hutchy blasts into the 130mph lap sector in third qualifying session at the TT – Anstey ups own best time so far on the RCV. 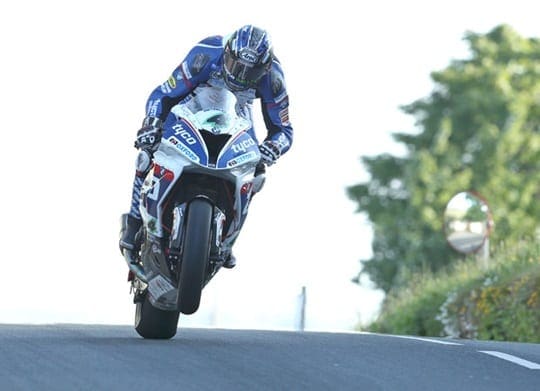 With glorious conditions once more all across the island, qualifying on Tuesday evening for the 2016 Isle of Man TT Races, fuelled by Monster Energy, went ahead promptly at 6.20pm and Ian Hutchinson recorded the first 130mph lap of the week with his fourth lap of the night stopping the clocks at 130.63mph.

Unlike the previous evening, the session was split into two with the Superbikes, Superstocks and Supersports away first before the latter were joined at 7.25pm by the Lightweights.  Michael Rutter and Steve Mercer, both Supebike mounted, led the field away followed by Dan Stewart and Bruce Anstey, also electing to go out on their Superbikes, the latter again on the RCV213S.

As expected, all the front runners were prominent with Ian Hutchinson in the third pairing away alongside Dean Harrison, while Peter Hickman, John McGuinness and Michael Dunlop weren’t far behind.

Hutchinson was quickest through the speed trap at 196.8mph and the Tyco BMW rider set the fastest opening lap at 129.120 although he was only slightly quicker than starting partner Harrison who lapped at 129.022. Anstey improved to 127.37 whilst Conor Cummins, Mercer, McGuinness and Hickman all broke the 127mph barrier

William Dunlop had stopped at Quaterbridge on his Superbike but returned to the paddock and rejoined the action on his Superstock bike while brother Michael also ran into trouble, pulling off the circuit before making his own way back to the Grandstand. However, the Ulsterman didn’t rejoin the session until 7.30pm on his Supersport bike.

Hutchinson switched to his Superstock BMW but Hickman, McGuinness, Cummins and James Hillier all went straight through and McGuinness went quickest at 129.62mph although he was only a fraction ahead of Hickman’s lap of 129.55. Cummins was also in the 129s whilst Mercer set his best ever lap of the Mountain Course, albeit unofficially, at 128.55.

Anstey improved again to 128.98mph while last year’s triple race winner Hutchinson went to the top of the Superstock leaderboard with a lap of 128.723mph. Meanwhile, newcomer Jochem van den Hoek from Holland was showing well with a lap in excess of 115mph.

Rutter then went second quickest in the Superstock class after lapping at 128.43 but a lot of attention was focussing on Anstey’s third lap on the RCV with his sector times showing he as on a flyer. However, he lost time coming down the Mountain and crossed the line at 128.85mph but Hutchinson had switched back to his Superbike with a lap of 129.5mph before saving the best until last with his 130.63mph lap.

At 7.25pm, it was the turn of the Lightweights to join the Supersports on course and TT Rider Liaison Officer John Barton was first to leave the line. Italian Stefano Bonetti was initially the quickest rider with his lap on the Paton being 114.611mph with last year’s Manx Grand Prix winner Rob Hodson not far behind at 113.545mph. However, there were all upstaged by last year’s race winner Ivan Lintin who went comfortably clear at the top of the pack after a lap of exactly 118mph.

In the Supersport class, Anstey was quickest with a speed of 124.51mph just ahead of Harrison and Hutchinson whilst Michael Dunlop got two laps in on his R6 Yamaha, the quickest of which was a fraction above 123mph.

Frank Gallagher (32nd) and Kamil Holan (Cruickshanks) both came off their machines in the session but both were reported as unhurt.