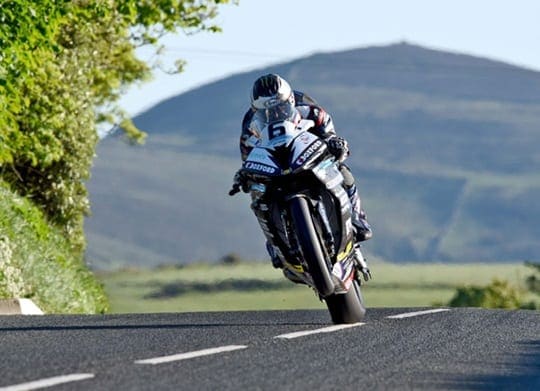 After an 11-minute delay, the first of the week so far, Wednesday evening’s qualifying session for the 2016 Isle of Man TT Races, fuelled by Monster Energy, burst into life with spectacular lap times in the RST Superbike and RL360 Quantum Superstock classes.

Despite strong winds reported on the Mountain section, Michael Dunlop threw down the gauntlet with the fastest lap of the week at an excellent 131.574mph, bettering Ian Hutchinson’s time set the previous evening. Although Dunlop dominated, Hutchinson was again above 130mph, setting his quickest lap of the night on his Superstock machine, 130.745mph.

It was expected that with the conditions, speeds would be slightly down on the previous night’s action although it soon became apparent that that wasn’t the case with a series of 129mph+ laps from a standing start.

Peter Hickman and Steve Mercer led the field away at 6.31pm with Michael Rutter and Dan Stewart, Ivan Lintin and Martin Jessopp, James Hillier and Bruce Anstey and Dean Harrison and Cameron Donald the next pairs away. John McGuinness was in the seventh pairing while Ian Hutchinson, who had made a number of experimental changes to the Tyco BMW, was in the tenth pair to leave the line.

Rutter was first back to the Grandstand with a lap of 129.163mph swiftly followed by Hickman and Mercer who were both in the 127mph bracket. However, Harrison briefly went quickest at 129.673mph before Hutchinson upstaged him with 129.811mph. Michael Dunlop was only slightly behind him though at 129.582mph with McGuinness and Lee Johnston both having lapped at more than 128mph.

Cummins strong qualifying continued with a lap of 129.764 but Dunlop’s second lap was down in the 127s as he’d switched to his Superstock mount. A number of riders reported how strong the winds were not over the Mountain but also in places like Kirk Michael.

However, Dunlop elected to go back onto his Superbike machine and set the first 131mph+ lap of the week with Hutchinson on his Superstock BMW topping the leaderboard from Rutter.

Meanwhile, the newcomer speeds were again improving, led by Jochem van den Hoek once more. The Dutchman lapped at 116.50mph, the fastest newcomer lap of the week but Alessandro Polita and Seamus Elliott were both above the 113mph mark with Forrest Dunn, Michael Booth and Josh Daley all above 111mph, with Daley’s time set on his Supersport machine.