TT 2016: Holden and Winkle still fastest in the chairs but competition closing in 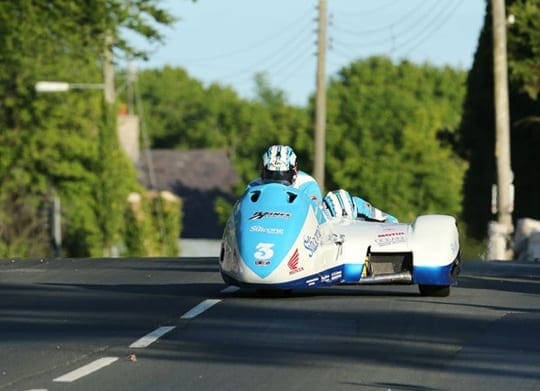 The third Sidecar session of the 2016 Isle of Man TT races, fuelled by Monster Energy, got underway slightly later than scheduled at 7.57pm on Wednesday night.

Dave Molyneux/Daniel Sayle were first away and hoping to get their first proper flying lap in of the week, with Ben and Tom Birchall, John Holden/Andy Winkle and Ian Bell/Carl Bell the next to leave the line followed by Tim Reeves/Patrick Farrance, the latter none the worse for wear having clipped the bank on the approach to Laurel Bank last night.

However, both Reeves/Farrance and the Birchalls had relatively slow opening laps while Molyneux was reported as having stopped at Sulby Bridge where he and Sayle were making adjustments.

Holden/Winkle were back first with a lap of 113.191mph, slightly quicker than their lap on Tuesday night, and they were fastest from the Bells who were again showing well at 112.113mph. Alan Founds/Aki Aalto were the only other outfit to break the 110mph barrier, with a speed of 111.300mph although Conrad Harrison/Jason Crowe were edging ever closer at 109.002mph.

Pete Founds/Jevan Walmsley were again showing good form at 109.219mph but Reeves/Farrance completed their opening lap at 102.710mph, carrying on straight through for a second lap while the Birchalls opened with 99.263mph.

Newcomers Lewis Blackstock/Patrick Rosney were flying, upping their speed to an impressive 104.014mph but Reeves/Farrance had clearly used their first lap to ease themselves back in and second time around, they upped their pace considerably to 113.735mph.

However, it wasn’t quite enough to knock Holden/Winkle off the top spot though as their second lap was the quickest of the week at 113.955mph. The Birchalls also put themselves contention for Saturday’s opening Sure Sidecar Race and slotted into third on the leaderboard after a lap of 113.514mph, with just four and a half seconds covering the top three.

The Bells second lap was slightly quicker at 112.240mph whilst Founds/Walmsley posted their first ever 110mph plus lap, albeit unofficially, after lapping at 110.434mph. Wayne Lockey/Mark Sayers just missed out but 109.810mph was still their best of the week.

Aki Aalto, passenger to Alan Founds, was reported to have been hit by a piece of fairing debris but was reviewed by the Doctor at the scene and assessed not to have received any injuries.