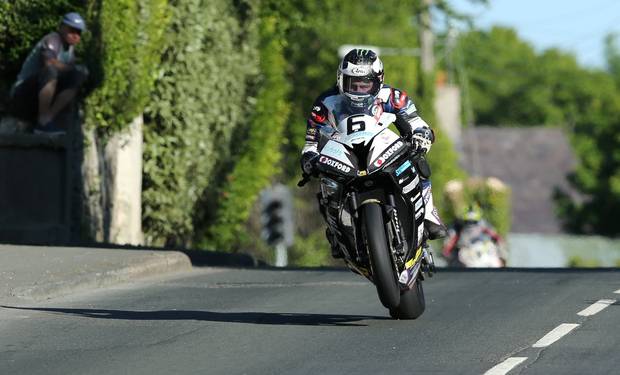 With perfect conditions yet again all the way round the Mountain Course, Thursday evening’s qualifying session at the 2016 Isle of Man TT Races saw Michael Dunlop set the island alight with the first 132mph+ lap of the week.

The Ulsterman lapped at 132.36mph on his Hawk Racing BMW and also made the headlines in the Superstock class with his lap of 131.34mph an unofficial lap record.

Early in the evening, the idyllic conditions only hinted at the explosive action that was to follow. Ivan Lintin and Steve Mercer were first to leave the line at exactly 6.20pm with Michael Rutter and James Hillier and Martin Jessopp and Bruce Anstey next to go, the latter on his more familiar Honda Fireblade after focussing his efforts in recent nights on the Honda RC213V-S.

Ian Hutchinson and Gary Johnson were also early away with John McGuinness setting off, as normal, slightly further back in the seventh pairing and Michael Dunlop starting ten seconds ahead of him.

Mercer and Lintin were first back past the Grandstand at 127.97 and 127.76 respectively but Hutchinson was flying and despite it being a standing start, he lapped at a superb 131.66mph – the only rider above 130mph although Dean Harrison was close at 129.97mph.

David Johnson was going great guns on the Norton setting a new best ever lap for the British machine with a speed of 127.20mph but Peter Hickman was out of luck having stopped at Westwood on the approach to Kirk Michael.

Hutchinson was flying on his second lap but jut when it looked like he’d post a 132mph+ lap, his pace dropped on the second half of the lap eventually stopping the clocks at 131.11mph but Dunlop,’s fine form continued with the fastest ever Superstock lap on the BMW.

John McGuinness was also above the 131mph barrier with his fastest lap of the week – 131.12mph – whilst Johnson’s second lap on the Norton was quicker still at 127.74mph. Anstey wasn’t having the best of fortunes on his first lap of the night on the RCV with a speed of 120.43mph.

Dunlop, meanwhile, had switched to his Superbike BMW and his first lap was 130.88mph with Johnson and the Norton improving yet again to an impressive 128.32mph on his third lap. However, Dunlop saved the best to last with that lap of 132.34mph.  Anstey’s evening ended with a spill at Keppel Gate and although he was reported to be unhurt he was taken by airmed for a precautionary check over.  He is expected to line up in tomorrow’s final qualifying session.

As the RST Superbike and RL360 Quantum Superstock session came to an end, the Bennetts Lightweights joined the Monster Energy Supersport class at 7.25pm with Anthony Redmond and John Barton first away followed by Rob Livesey and Bjorn Gunnarsson.

Lee Johnston went to the top of the week’s Supersport leaderboard after a lap of 124.84mph while Rutter moved to the top of the Lightweight’s leaderboard for the week with 118.054mph while Italian Stefano Bonetti and Danny Webb also went well with 116.220 and 116.140 respectively. One of the main contenders for Wednesday’s Race, James Hillier, experienced a frustrating session, failing to get a lap in having stopped at Appledene in the earlier session.