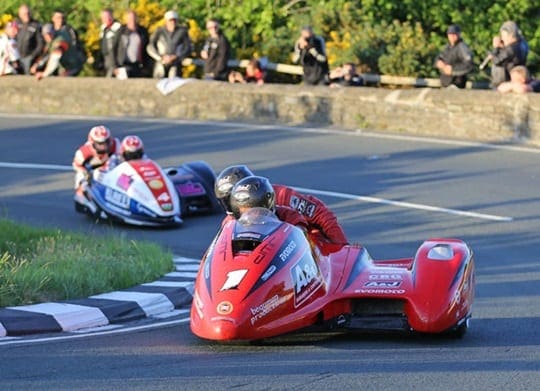 Tim Reeves and Patrick Farrance upped the ante in qualifying for the two Sure Mobile Formula Two sidecar races with a best lap of 114.83mph to send them to the top of the leaderboard.

17-times TT winner Dave Molyneux, with Dan Sayle in the chair, wasn’t too far behind with another 114mph plus lap as Ben and Tom Birchall also put themselves in contention.

Keen to make up for lost time, with only one lap under their belt in earlier outings, Molyneux/Sayle headed off towards Bray Hill first followed by Tim Reeves/Patrick Farrance, Ben and Tom Birchall, Ian and Carl Bell and Alan Founds/Aki Aalto. John Holden/Andy Winkle, meanwhile, set off further down the field.

Molyneux reached the Grandstand first with a speed of 114.10mph but Reeves had halved the starting deficit of ten seconds and his lap of 114.73mph was the fastest lap of the week as well as being a new personal best, albeit unofficially.

The Bells were again showing well with a lap of 112.46mph whilst Holden eventually got away at the rear of the field, using the session to run in a new engine and scrub in some new tyres.

On the second lap, Reeves had overhauled Molyneux on the road and the Kent driver’s pace could be seen at the end of the lap as he went quicker still with a lap of 114.83mph. Molyneux was also in the 114mph bracket again.

The Birchalls meanwhile had had a slow first lap but they were clearly bedding something in as second time around, they lapped in excess of 113mph to prove they will be in contention in Saturday’s first race day.

Gary Bryan/Jamie Winn posted their best lap of the week at 111.14 while Peter Founds/Jevan Walmsley put in two laps of 110mph with Steve and Matty Ramsden, Dwight Beare/Ben Binns and Tony Baker/Fiona Baker-Milligan all above 109mph.

Manfred Wechserberger, passenger to Michael Grabmuller, fell out of the sidecar at Ballaugh but was assessed at the scene and reported to be uninjured.