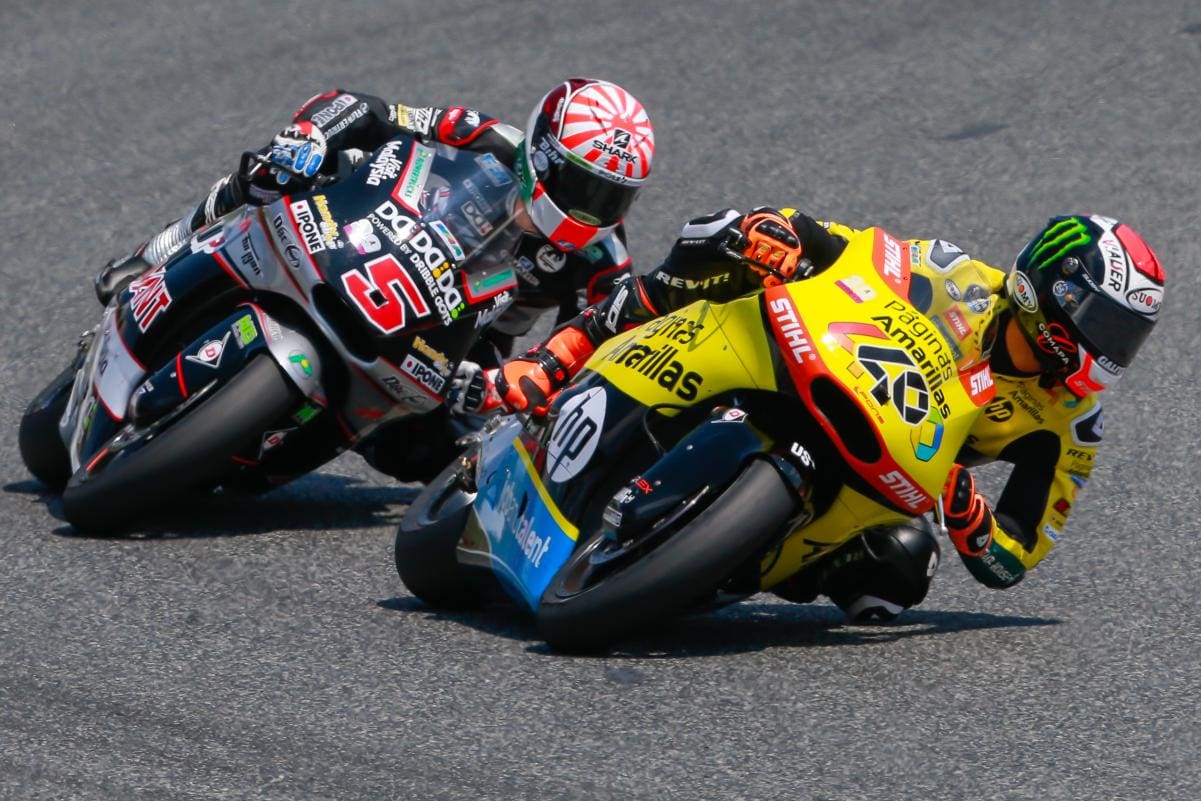 All eyes were on the leading two on the Moto2 World Championship grid, pole setter Johann Zarco (Ajo Motorsport) and Alex Rins (Paginas Amarillas HP 40) having set the pace on the new layout. Conditions continued to heat up, the track at 43°C just ahead of the lights going out for round seven of the 2016 championship. Tom Luthi (Garage Plus Interwetten) made an incredible start to lead into Turn 1 with Takaaki Nakagami (Idemitsu Honda Team Asia) sliding in just behind him.

From lap two onwards Zarco was locked deep in the battle for the podium, closing in on Rins slowly but surely. The French rider ensured the gap was never more than a third of a second as they continued to snake their way around the Circuit de Barcelona – Catalunya. At the start of lap 17 Zarco took the lead for the first time and began to push to open up an advantage, quickly opening up a half second lead. Zarco would eventually cross the line four seconds ahead of Rins, taking a perfect 50 points from the last two races and moving into third.

Rins may not have had the best launch but was up into second within just a few corners, immediately looking for a way past Luthi. Like a man possessed the Barcelona native scythed through on Luthi at the end of the first lap to lead across the line. Zarco was right with him, sticking on his tail and occasionally applying pressure. The Frenchman would eventually get past, Rins unable to respond at the end of the race. Although unable to challenge for victory, Rins now takes the lead in the championship.

The battle for third was one of the most thrilling of the weekend, Tom Luthi holding the position for much of the race. Alex Marquez (Estrella Galicia 0,0 Marc VDS) was gaining on him but on lap 12 Marquez crashed at Turn 10, Nakagami then picking up his challenge and taking third from Luthi on lap 17. The Japanese rider then went about opening up a one second lead to return to the podium for the first time since Misano 2015.

With a great launch Luthi was able to lead for most of the first lap before Rins blasted past. He tried to stay with Rins and Zarco but was unable to match their pace which was half a second faster than his own during the first half of the race. Luthi continued to fade, falling into the clutches of Hafizh Syahrin (Petronas Raceline Malaysia). The two battled till the end with Syahrin winning out for fourth position.

Lap three saw Simone Corsi (Speed Up Racing) and Lorenzo Baldassarri (Forward Team) come together at Turn 15, Corsi trying to force a gap. The incident was looked at by Race Direction, ruled a racing incident.

Championship leader when the race began; Sam Lowes (Federal Oil Gresini Moto2) was unable to get within touching distance of the podium, unable to even challenge the top five. He eventually finished sixth, losing the championship lead once more in an ever-tightening Moto2 championship.

Danny Kent (Leopard Racing) was forced to retire from the race, as did Sandro Cortese (Dynavolt Intact GP). None of the former Moto3 World Champions able to finish the race.