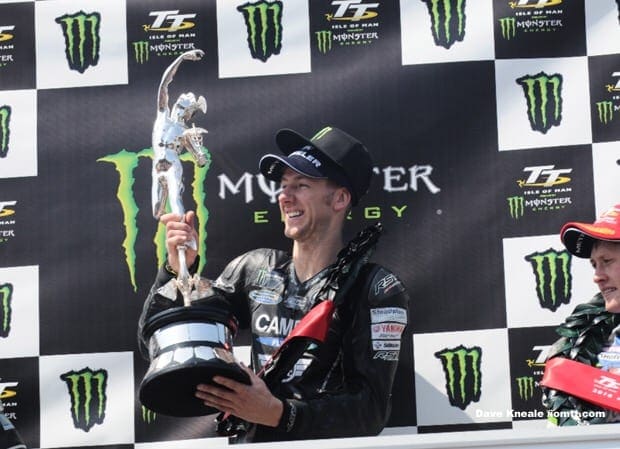 The CAME BPT/Team Traction Control Yamaha dominated from start to finish to take his third win of the week and his fourth Supersport win in a row following last year’s double and his win earlier this week. It was also his eighth Supersport win in total.

His eventual winning margin was 17.5s with Michael Dunlop overcoming the disappointment of Monday’s disqualification to claim second with Dean Harrison on the podium again in third.

The race was delayed by two hours due to sea mist swirling round parts of the island, finally getting underway at 12.45pm, but at Glen Helen on the opening lap,

Hutchinson led but only narrowly with Dunlop just six tenths of a second behind which Hutchinson extended to half a second by Ramsey.

However, with an opening lap of 127.451mph Hutchinson established a commanding lead of four seconds while Dunlop pointed down to his machine as he flashed past the Grandstand. Harrison slotted into third, 7.6s behind Dunlop but ahead of Bruce Anstey, Conor Cummins and James Hillier as the top eight all lapped at more than 125mph.

By Glen Helen second time around, Hutchinson was exerting his control on the race as the gap grew to 5.6s and he now led on the road as well having caught and passed Anstey and John McGuinness. The Kiwi was still in fourth ahead of Cummins and Hillier as Harrison maintained his third place.

Hutchinson’s second lap was slightly quicker than his first at 127.736s and when he came into the solitary pit stop, the margin over Dunlop had grown further to 7.1s. However, he had a quicker pit stop than his arch-rival and by the time they reached Glen Helen on lap three, the margin had shot up to 12s.

Harrison was still holding onto third from Anstey, Cummins and Hillier and although McGuinness started the third lap in eighth, he retired shortly afterwards at Braddan Church.

At the head of the field, there were no such problems for Hutchinson and he continued to pull away from Dunlop throughout the lap as the podium positions were being cemented. It was a lot closer for fourth though as just six seconds separated Anstey, Hillier, Cummins and Lee Johnston.

Going into the fourth and final lap and Hutchinson had stretched further away, his lead now up to 18s at Glen Helen. Harrison was looking secure in third but Hillier was on the move and by Ballaugh he’d overtaken Anstey albeit by just half a second.

Hutchinson wasn’t to be denied his third win of the week and with another start to finish victory, he got the verdict from Dunlop and Harrison with Hillier sealing fourth with a final lap of 126.968mph. Anstey, Johnston and Cummins were close behind with just 5.6s covering the quartet with Peter Hickman, Gary Johnson and Michael Rutter completed the top ten.

The win has seen Hutchinson already clinch the Joey Dunlop Championship with an unassailable total of 95pts with Harrison in second on 67 and Hillier third on 50.

Meanwhile, the battle for the TT Privateer’s Championship continues to rage on. Jamie Coward got the maximum 25 points having finished in a fine 12th place. Michael Dokoupil was second with Dan Hegarty in third and Coward now has 72 points to Hegarty’s 66.