TT 2016: Lintin lights up Lightweight to make it two in a row 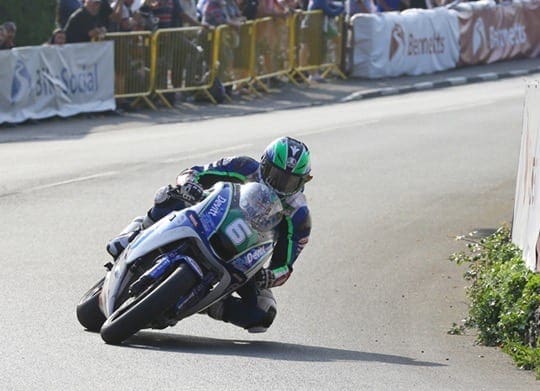 Ivan Lintin won the four-lap Lightweight TT race at the 2016 Isle of Man TT Races on Wednesday evening, the second year in a row for both him and Devitt RC Express Racing – and third in total for the team – as he came home 12.4s ahead of James Hillier. Yeovil’s Martin Jessopp, on the Riders Motorcycles Kawasaki claimed third for his maiden TT podium.

Morning mist had seen the race pushed back to a 6.30pm start and at Glen Helen on the opening lap, it was Lintin who led but it was close with his advantage over Hillier just 0.33s while Michael Rutter was only a further tenth of a second back in third. Italian Stefano Bonetti jumped up the order into fourth on the Paton with Daniel Cooper and Gary Johnson rounding out the top six but Danny Webb and Mark Miller were already reported to be out on the opening lap.

By Ramsey, there was a change at the front of the field with Hillier in the lead from Lintin with Rutter still in third and with an opening lap speed of 118.864mph, it was the Quattro Plant Muc-Off Kawasaki rider who led at the end of the first lap. Lintin was now 2.1s adrift in second with Johnson, Bonetti, Martin Jessopp and Cooper completing the top six with Rutter having retired at Brandywell.

The difference between Hillier and Lintin remained negligible throughout the second lap with the margin varying between the timing points. Indeed, Lintin had reduced the gap to 1.1s at Ramsey Hairpin and as they came into their pit stop at the end of the second lap, just 1.4s separated the pair but Lintin was now the new race leader. Johnson was still holding onto third ahead of Jessopp, Bonetti and Cooper.

A quicker pit stop by the Devitt RC Express Racing team gave Lintin some breathing space and by Glen Helen on the third lap, his lead over Hillier had gone out to 8.2s. Jessopp’s pit crew also put in a rapid turn around and he moved into third ahead of Johnson.

At the head of the field, the gap between Lintin and Hillier now remained constant and the race was all about these two as Jessopp, although now in third, was over a minute back. Italian Bonetti on the Paton regained fourth with Johnson dropping to fifth although with a healthy gap over sixth placed Cooper.

Lintin was pressing on ahead though and, riding to his signals, he wasn’t to be denied his second successive win in the class, also making it three in a row for the team after Dean Harrison’s triumph in 2014. Lintin’s win also made him the first man to win the Lightweight race more than once since it was re-introduced in 2012.

Hillier was secure in second but the battle for third went all the way to the chequered flag and it eventually went the way of Jessopp by just over two seconds from Johnson with Bonetti and Cooper rounding out the top six.