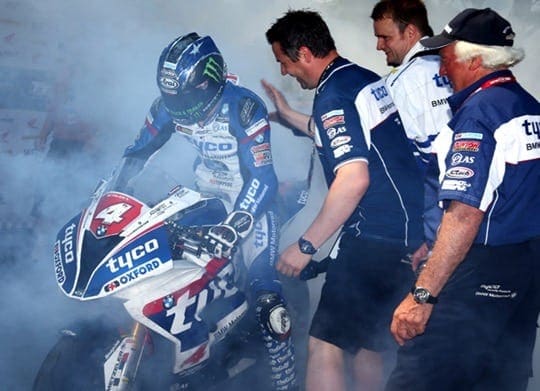 FOURTEEN times TT winner Ian Hutchinson has shot a massive warning across the bows of his Senior TT rivals ahead of tomorrow’s premier race.

Speaking in a private audience with show on The Island tonight, the Bingley Bullet told an expectant crowd: “You should bet on me for tomorrow!”

The rider, who became the fourth most successful man in TT history on Wednesday when he won his second Supersport race of the week, his third victory overall so far of TT 2016, said that not only was he on form this week but the bike underneath him, a Tyco BMW S1000RR, was a weapon.

“It’s got a new engine and there’s some new chassis parts too. I’ve been out on it just once and that was in Practice Week and on that first outing I did a 17 minute lap dead – quick enough to be virtually a 133mph lap which is what I think we’re going to need to do to be competitive. I think there’s going to be a few 133s going on during the race.

“And that was the very first time on the bike. It’s the best bike I’ve ever ridden at the TT and I’m looking forward to tomorrow.”

The Senior race starts on the Isle of Man at 12.45pm tomorrow, weather permitting.