Indian has just confirmed the scoop that we told you about first – a year ago!

The American firm has just said that it is going to go AMA flat track racing with it’s first full factory racing effort since the 1950s. And it’s going to do it with a new liquid-cooled motor.

And here’s how we told you it was going to happen, this time last year: 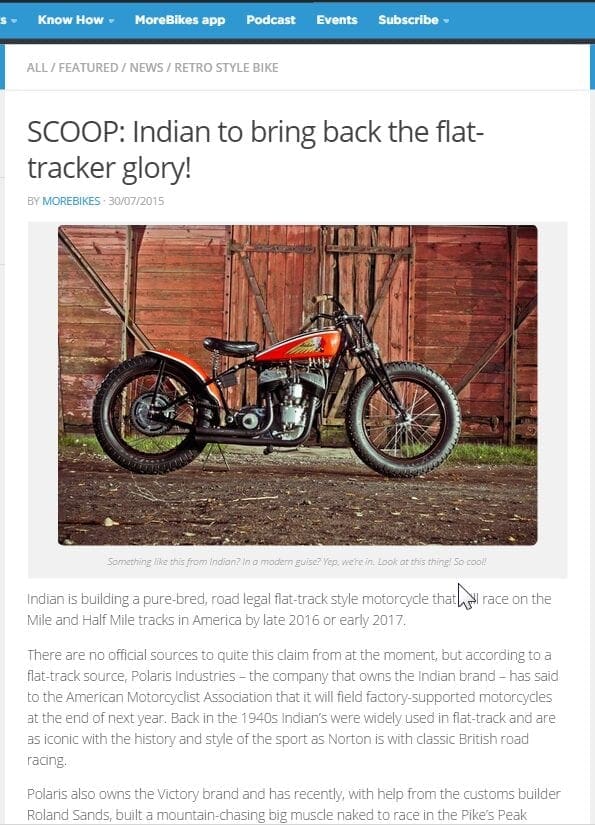 Now, you don’t need to read anything else really, because we told you all this last JULY. But just to act as a keeper of the press, here’s the actual release from Indian:

The Indian Motorcycle Racing Team will contest the series with an all-new and proprietary liquid-cooled 750cc four-valve V-Twin competition engine specifically designed for flat track and engineered into a specially built chassis.

Indian Motorcycle has a significant history in flat track, at one time dominating the sport with legendary riders and motorcycles. Perhaps best-known was the Indian Motorcycle Wrecking Crew, consisting of Bill Tuman, Bobby Hill and Ernie Beckman, who won race after race and carried the message of power, balance and quality that lives on in today’s Indian Scout.

“We are very excited to return to the AMA Circuit,” says Steve Menneto, President of Motorcycles for Polaris Industries. “We have established the new Indian Chief and Scout series as the cornerstones of our production line-up, and now is the time for us to return to racing in a big way. We know that fans of Indian Motorcycle have been anticipating this announcement and can’t wait to see Indian Racing back in action.”

“Indian Motorcycle was born out of competition, and through its history used racing to develop and improve the product as well as expand the appeal of the brand,” says Reid Wilson, Marketing Director for Indian Motorcycle. “As shepherds for the brand, we will continue that push towards excellence on the street and in competition, and our team is beyond excited to bring the brand back to professional racing.”

“I can’t express how excited I am to be the guy to bring Indian Motorcycle back into the forefront of AMA Pro competition,” says Mees. “We will have a lot of work to do to develop a 100 percent new race platform, but I’m committed and excited at what I have seen on the drawing boards and what the plans are for Indian Motorcycle Racing. This is history for the brand, and being a part of it is truly exciting for me and this sport.”

Indian Motorcycle will race the new motorcycle at a circuit to be determined in 2016 in preparation for a full season of competition in 2017.