BMW is launching a new… wait for it… Comic book! 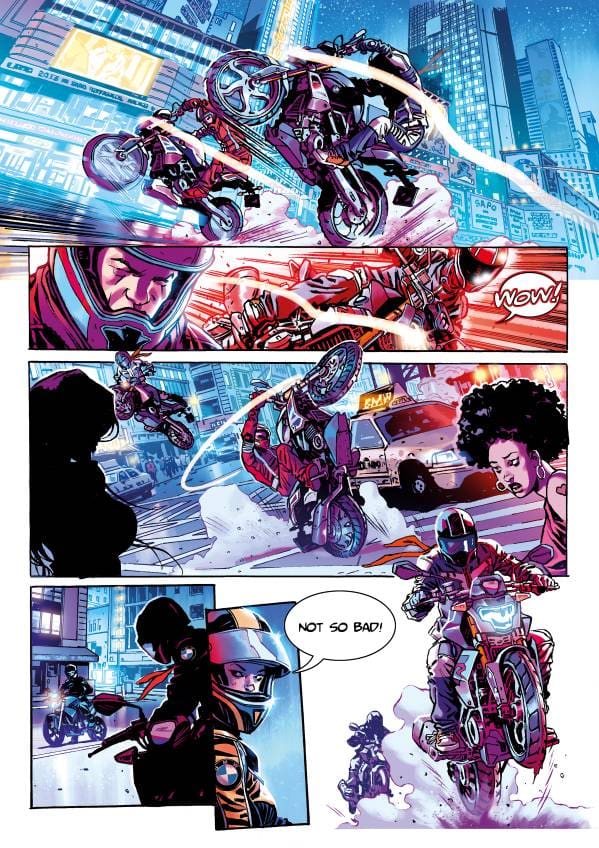 What’s the only thing missing from the BMW range? Well, erm, a comic book of course!

That slight oversight is now being put right with the launch of a graphic novel entitled “Riders in the Storm”, with a policewoman, a wolf, a racing rider and a street artist among the heroes of the motorcycle inspired story.

The work is currently being created by the Bavarian company in collaboration with the publisher Panini Verlags GmbH, with publication planned for October 2016.

Here are the full details from BMW:

From now on, BMW Motorrad not only travels the roads of the real world but pursues fictional paths, too. In collaboration with the publisher Panini Verlags GmbH, a graphic novel entitled “Riders in the Storm” is currently being created with publication planned for October 2016.

The text and story are being provided by Croatian author and illustrator Darko Macan. For the illustration of this limited-edition work it was possible to gain the services of the Italian Riccardo Burchielli, who has worked for more than 15 years as a comic book artist for major publishers in the USA such as DC Comics, Marvel and Dark Horse. “Many of us have been familiar with comics since childhood, and we have seen superheroes and fantasy worlds adapted for the big screen, too. The people behind these stories are equally fascinating. Riccardo Burchielli is a motorcycling enthusiast himself and through him we are able to provide insights into how a comic story comes into being. And of course we ensure his heroes are equipped with suitable bikes,” says Dr. Ralf Rodepeter, Head of Marketing and Product Management BMW Motorrad.

So who are the heroes battling against evil on their motorcycles? Makani – inspired by real-life tattoo model and human work of art Makani Terror – is a policewoman. Her companions are a wolf with exceptional powers, the passionate racing rider Eve and the rather out-of-the-ordinary street artist Nikki Animah. Then there are the mysterious Black Riders of course – they too are inspired by real-life characters. “This is a very special project for us, and it’s a great honour and pleasure to be able to collaborate with BMW Motorrad,” says Hermann Paul, managing director of Panini Verlags GmbH. “The author and illustrator are having enormous fun, and we very much look forward to overseeing this extravagant and stylish blend of fantasy, adventure and mystery. The comic is conceived as a limited edition, so it will be a really great item for collectors worldwide,” adds Paul.

“Riders in the Storm” is very special to Riccardo Burchielli at a personal level, too: in addition to his passion for illustration, the Italian is also an avid motorcyclist. His hobby provides him with inspiration for his stories, which often take place in unusual settings where the heroes are initially confronted with dark forces before ultimately rising like a phoenix from the ashes to enter a whole new world. As Burchielli himself says, motorcycling is all about “how you relate to your natural surroundings and the landscapes you pass through. It’s a feeling of freedom that comes from your ability to move freely in the world like a cowboy. It’s also about your connection with your motorcycle, which is rather like a loyal friend. And not least it’s about total relaxation. When you’re riding your bike, that’s all you’re focused on. There’s no room for anything else in your head – you’re totally free at that moment.” In “Riders in the Storm” he is able to bring together his two great passions together for the first time: illustrating and motorcycling.

BMW Motorrad and Panini will be presenting their project for the first time at Comic Con Germany in Stuttgart on 25 and 26 June, 2016. Tattoo model Makani Terror will be in attendance at the Panini Verlags GmbH trade fair stand, and there will be an exclusively designed Art Bike of the new BMW G 310 R on show.

Riccardo Burchielli will also be signing autographs at the upcoming BMW Motorrad Days from 1 to 3 July, 2016 in Garmisch-Partenkirchen.