Want to see secret inside Norton pics? Insider photos of the development ‘corner’ reveal the chassis work under development

Norton has released a drawing and claims that a 1200cc V4 superbike is going to appear as part of the firm’s 2017 range.

Norton has also said that the bike is ‘targetting’ 200bhp, will have funky rear-view cameras instead of boring old mirrors and will be in very limited numbers. 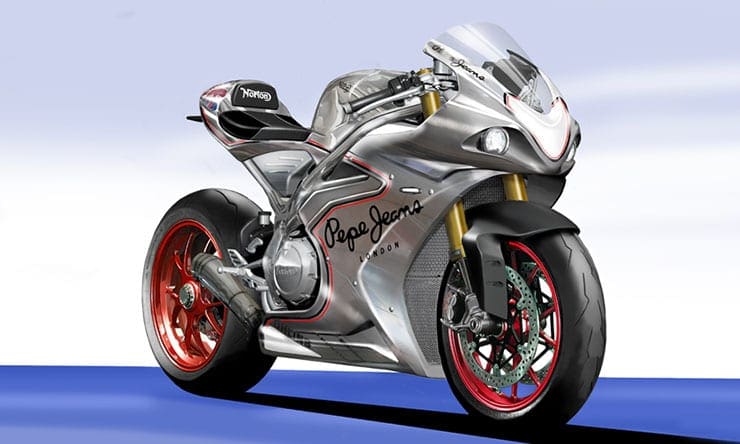 It’ll also have a single-sided swingarm and will probably be clever enough to do your kid’s maths homework. It’s going to save the Panda from extinction and solve the gender pay gap too – probably.

But whatever the hype says, these pictures that we’ve been sent tell a different story.

What Norton seems to have in place for the putting together of its bike is effectively a semi-stripped out large office with the construction bays separated by low office dividers. The old office carpet tiles are still on the floor and the component parts for each model are wheeled in on trolleys for the two-man teams to bolt on and in to each bike as needed. 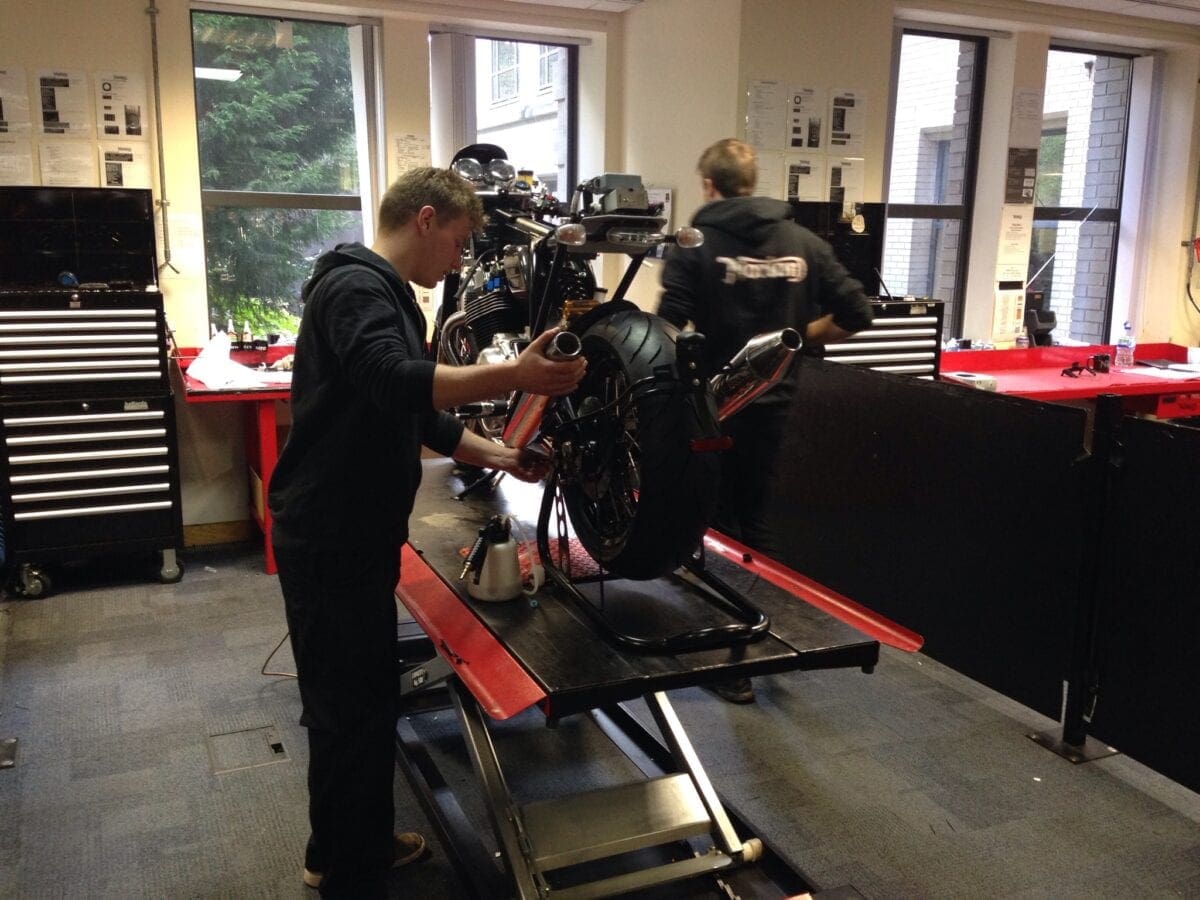 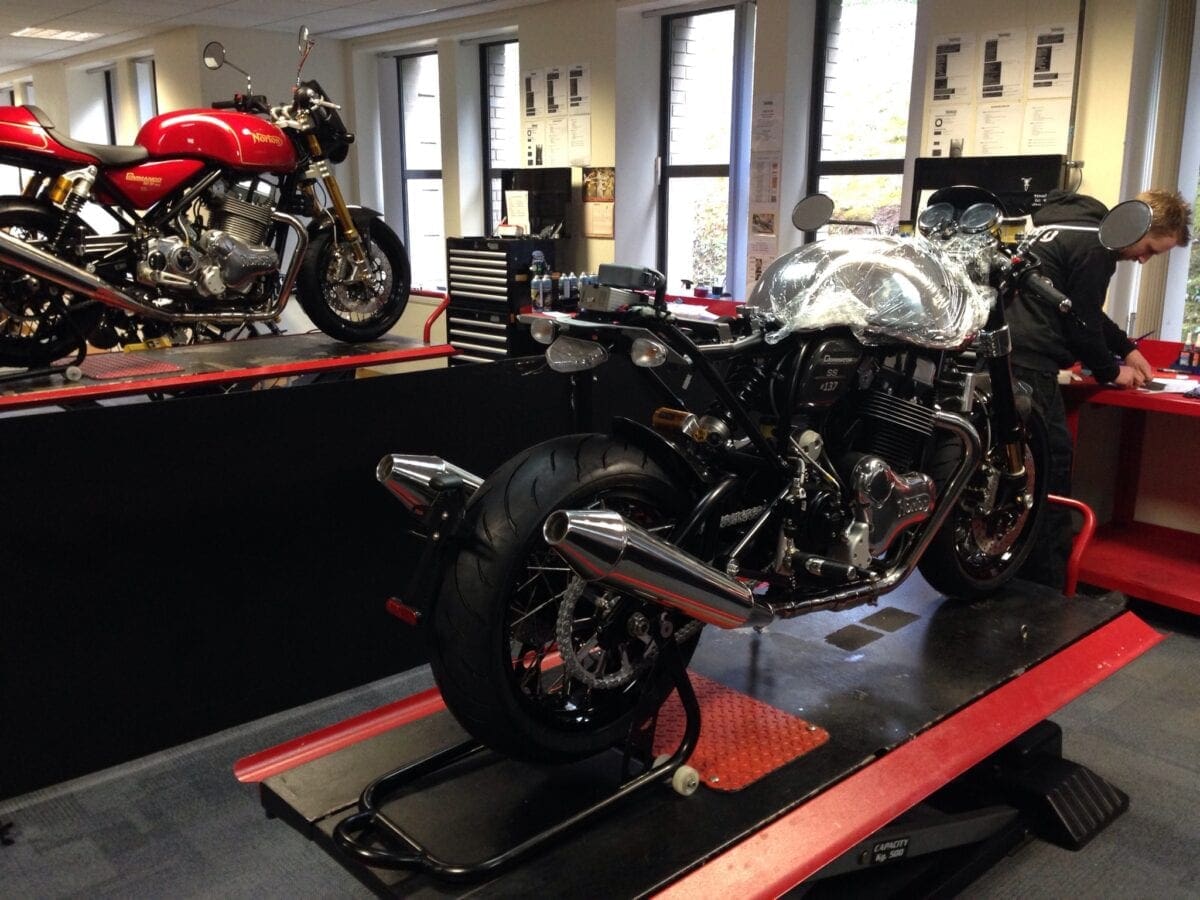 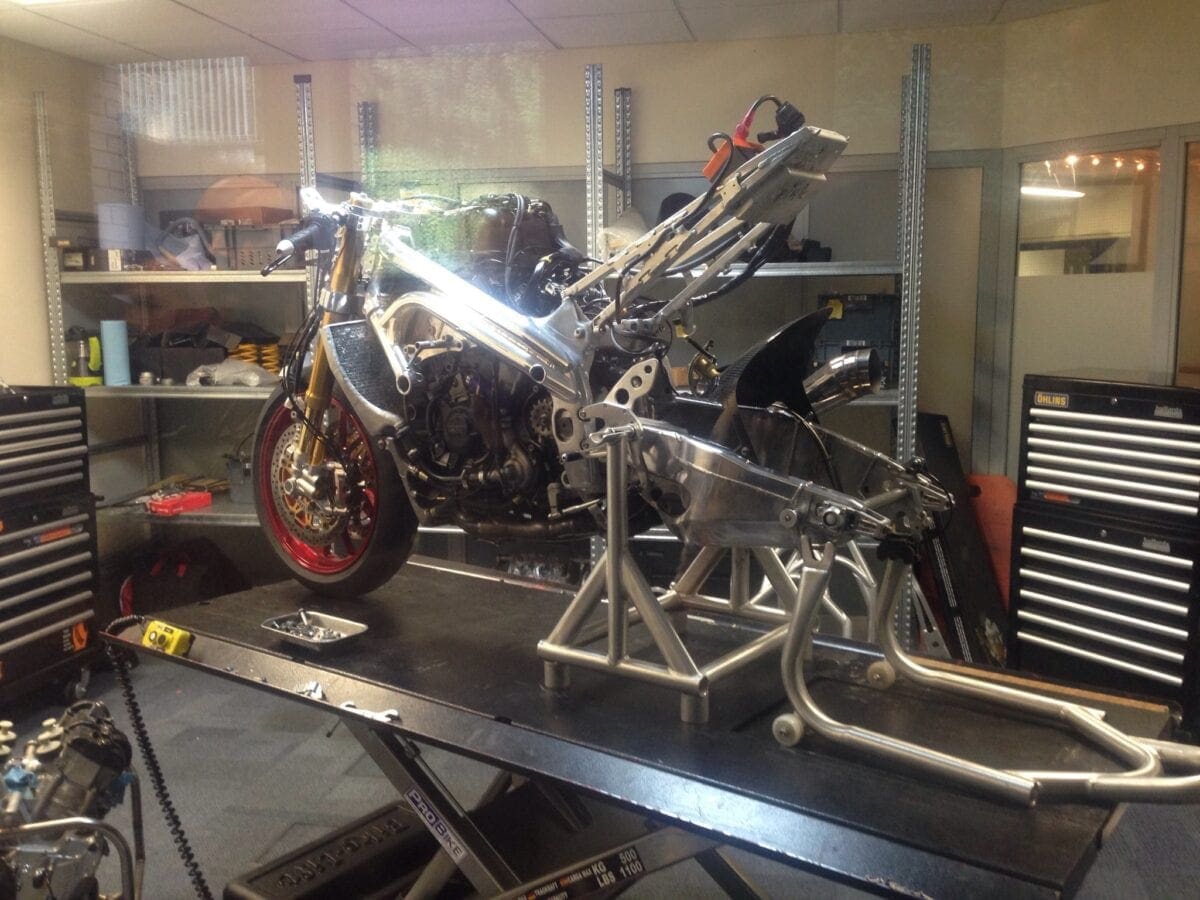 And the hands-on part of the V4 development (with what looks like the majority of the bolt-together legwork being done from the base-TT racebike upon which the limited-edition roadbike will be based) is happening in a corner office section of the bigger, production-line office – pictured above.

In the pictures we’ve been sent you can see the TT-based frame on the floor, an Aprilia-derived engine also on the floor and there’s various details written on a wipeboard in the single-bike development room which is sectioned off from the rest of the converted open-plan office space by a half-glass corner office wall. 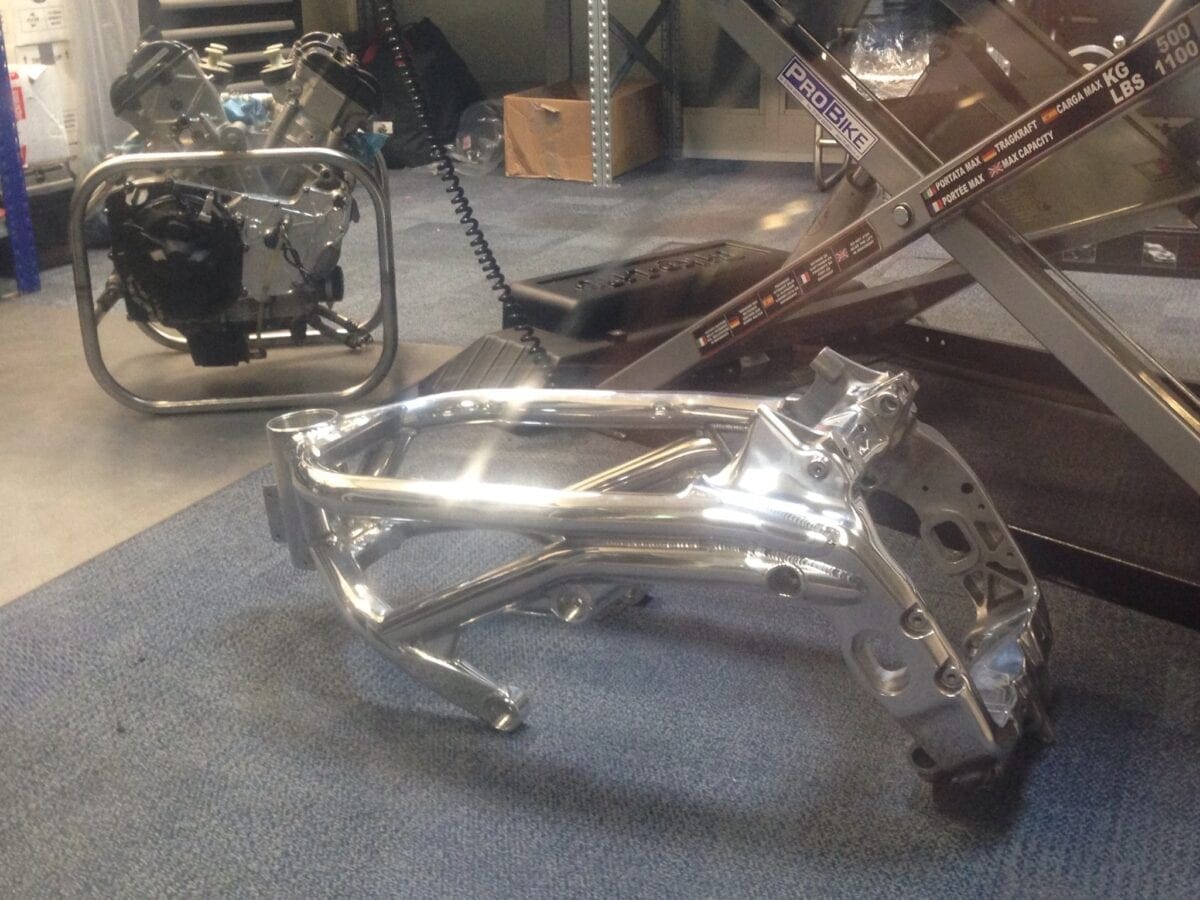 Whilst the Aprilia-based engine was the motor used in the TT this year, the new 72 degree V4 unit is – according to Norton – being developed in conjunction with Sussex-based engine company Ricardo Engineering, so we’ll have to see if it stays based around the Aprilia or switches to a Ducati based engine (in today’s drawing from Norton the V4 does have a single-sided Ducati-esque swingarm so it might be Ducati-based). 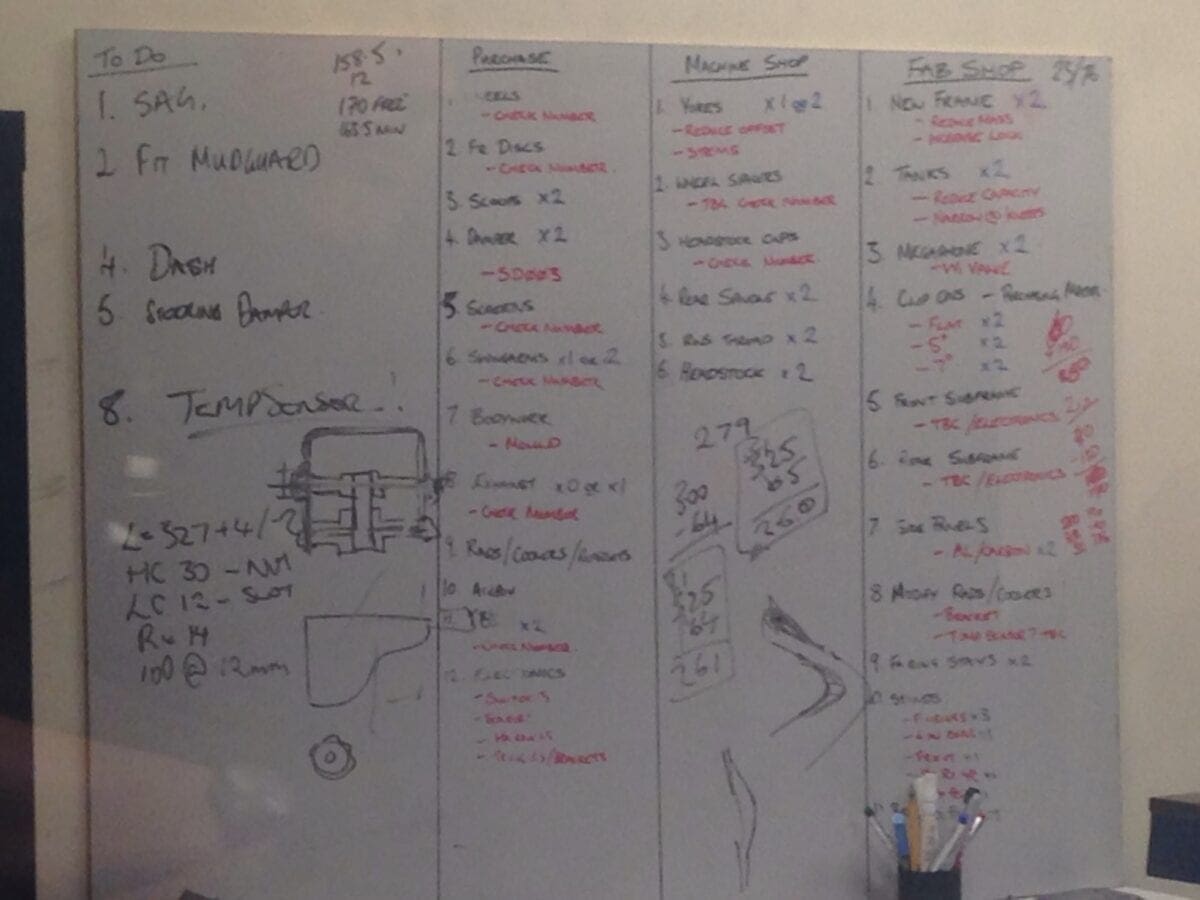