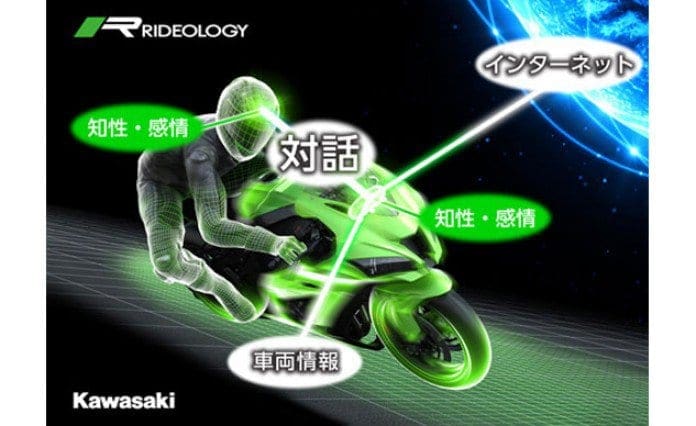 Kawasaki has announced that it IS working on as artificial intelligence system that will let your bike communicate and adapt to your needs as your ride.

The artificial intelligence system will not only actually be able to ‘talk’ and respond to a rider’s commands but can change a bike’s set-up, power and handling character exactly as needed by the rider. All of this will be done via a live link to specific AI cloud computing.

So far, so next-generation, but the biggest (and most Knight Rider-y part of all of this) is that the AI on the motorcycle won’t ‘just’ be limited to shifting major bike components as needed but will also feature what Kawasaki calls an ‘EMOTION ENGINE’ which will interpret a rider’s emotions and could give the bike its own personality. Yep, so your H2R could literally have a mind of its own and a mood to match. And it’ll be able to read your mood too. And talk to you. And then change its power and ride quality to match what you want – or , we assume – to piss you off if the bike doesn’t like you.

The Emotion Engine isn’t the stuff of Arthur C Clarke though, it’s already happening and has been developed by a company called Cocoro SB which is par of the mega-tech giant Softbank (which has just acquired ARM technologies just outside of Cambridge, the world-leading developer of microchip and small-tech futures).

Although the tech is pretty basic at the moment, the Emotion Engine is here and is moving forward at a rapid rate. Next stop – as officially announced by Kawasaki – is to have it on your bike and using it so that your bike can talk to you and (more importantly) listen to you as you ride.

Here’s the emotion engine in action with the ‘Pepper’ interactive robot – this is already starting to appear in companies around the world and is being fed-out as an emotion-reading assistant. Think of the brain of this inside your H2R!