MotoGP: The secrets of braking good at Silverstone 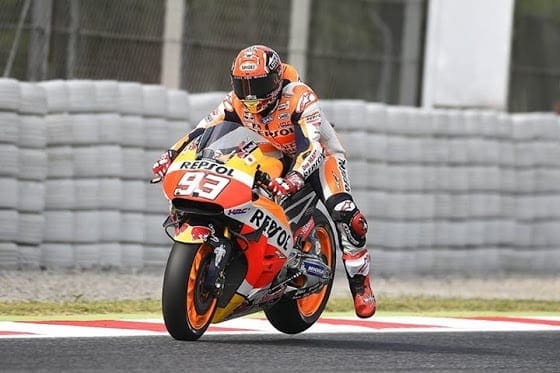 At 3.6-miles (5.9 km) in length, the Silverstone track is the longest and one of the fastest in the World Championship. It poses a lot of issues for stopping a full-on MotoGP machine and Brembo has broken down what is going to happen over this weekend.

Silverstone is characterised by numerous straightaways, fast curves and only slightly challenging braking sections that allow the braking systems to cool down during the race. Due to frequent rain, steel discs are used instead of the traditional carbon discs. Indeed, it was during a downpour in 2015 that Valentino Rossi had to put his experience to the test, securing the victory just ahead of Danilo Petrucci.

According to Brembo technicians, who work with all of the MotoGP riders (Brembo is supplier to 100% of the premier class riders), the Silverstone Circuit falls into the category of tracks that present mid-level difficulty on the brakes. On a scale of 1 to 5, it earned a three on the difficulty index, the same score given to eight other tracks, including Misano where the next GP will be held.

Brake Use During the GP
Despite there being 18 turns (10 to the right, eight to the left) the MotoGP bikes resort to their brakes only 11 times per lap. Since none of the straights are particularly long, the bikes rarely go over 186mph (300kmh), the only exception being the 770-metre long Hangar Straight that leads to Stowe. At the end of this, the bikes do reach 205mph (330kmh).

So, even though the time per lap surpasses two minutes, the brakes are used for less than 34 seconds, which leads to a moderate average deceleration: 1.20g. Adding up all of the force applied by a rider on the brake lever during the entire GP, the sum is more than 1,050kg of force.

The Most Challenging Stops
Of the 11 braking sections on the Silverstone Circuit, none are considered highly challenging on the brakes, but seven are of medium difficulty and four are light.

The Vale Curve (number eight), contrary to what one might think, it was not named for Valentino Rossi but for the Aylesbury Vale neighborhood, is the curve taken at the lowest velocity: 40mph (65kmh). To go down to this speed, the braking system is in use for 4.1 seconds and its pressure reaches 11 bar. The Becketts Curve (turn four) is worth mentioning because to stay on the track, the riders have to reduce their velocity to 13mph (22kmh), but it only takes them 1.1 seconds and 150-feet (46 meters), less than the width of a football pitch.

Of the 39 editions of the British GP races in which they participated, bikes with Brembo brakes won 25 of the 500-MotoGP competitions. Honda was victorious thirteen times, Yamaha 10 and Ducati 2. Including last year’s race, Valentino Rossi has won six times. 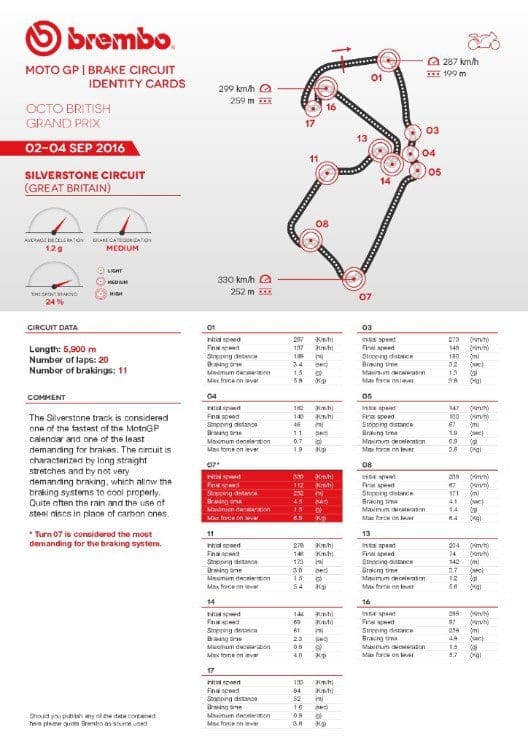