Moto3: Drama in the rain as Bagnaia takes pole 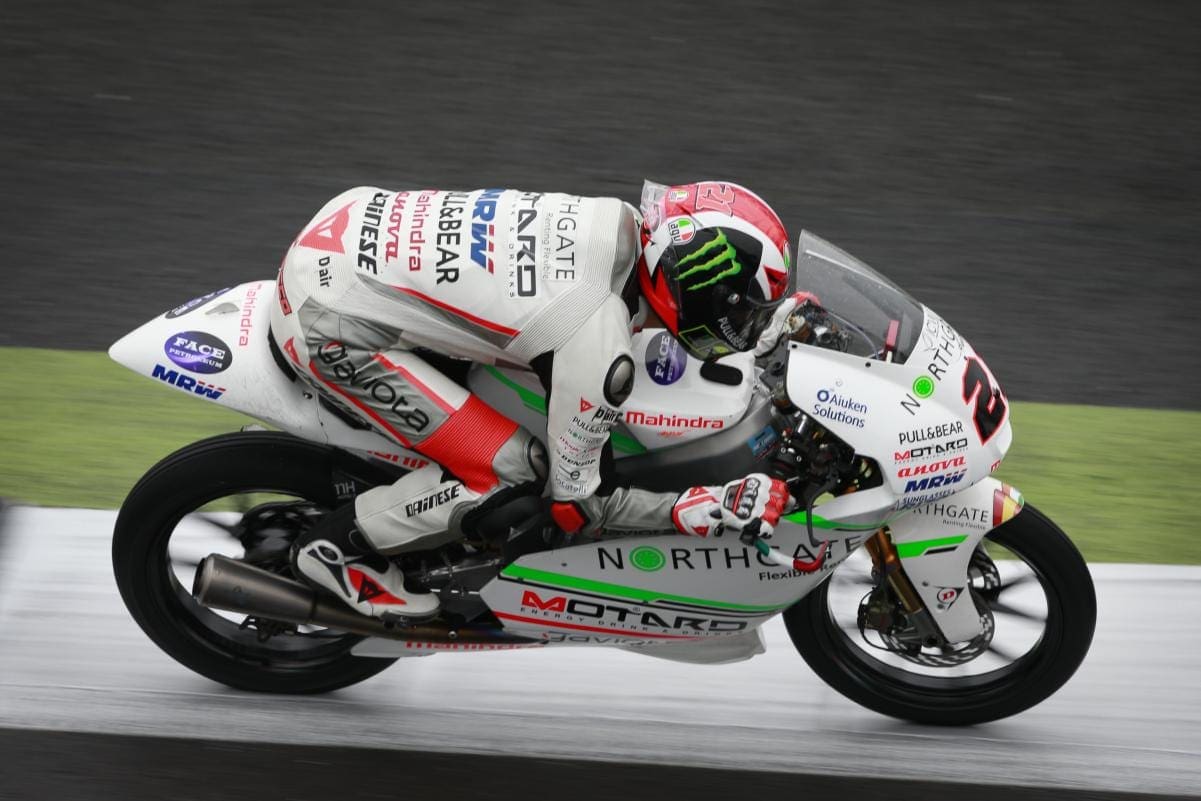 The skies opened at Silverstone for the promised Saturday drizzle at the Octo British Grand Prix, and unfortunately for Moto3 it was just ahead of their qualifying session that the rain came down. After almost no track time for the lower class having been affected by the weather, the session was sure to throw up a few surprises and it didn’t disappoint, with high rates of attrition.

The pacesetter in the dry at the British GP has undoubtedly been 2015 pole sitter Jorge Navarro (Estrella Galicia 0,0), but the Spaniard was one of the first major casualties of the weather as he took a tumble and was unable to restart the bike to get back to pitlane. Heading back to the garage with the clock ticking down and bike en route, Navarro was left at the mercy of the weather, along with his contemporaries. With the rain not improving and conditions treacherous over the length of the 5.9km circuit, it was Francesco Bagnaia (PULL&BEAR Aspar Mahindra) who put the lap together when it counted, taking his Mahindra to the top of the timesheets. The Italian heads his compatriot Enea Bastianini (Gresini Racing Moto3) on the front row, ahead of Dutch rookie Bo Bendsneyder (Red Bull KTM Ajo). Navarro will begin the race from a difficult P18, although the Spaniard will be looking to move forward quickly if Sunday proves to be drier – having topped FP3 by seven tenths of a second.

Bagnaia, who won the Moto3 race in Assen in a first career victory, has added another string to his impressive 2016 bow with his first career pole in Silverstone. The Italian is set to make the move to the new Sky Racing Team VR46 Moto2 outfit at its inception in 2017, and will also be looking to fight for the victory in the dry if the race proves to be so – having topped FP1 on Friday.

Enea Bastianini will be happy for another front row start in the Moto3 class, as the race winner continues to get back to the front of the pack in the lower category. Bastianini has shown good dry pace at Silverstone but had some competition from teammate Fabio Di Giannantonio before the rain came down, then moving up the order into P2.

Bo Bendsneyder (Red Bull KTM Ajo) continued his progress in the Moto3 world championship as he took his first front row start at the British GP, with a previous best qualifying position of P4 at the Sachsenring. The Dutch rookie excelled in the tough conditions to outqualify teammate Brad Binder – no mean feat with the South African 61 points clear at the top of the championship.

Niccolo Antonelli (Ongetta-Rivacold) heads up the second row in P4 despite a late crash at the final corner, just ahead of championship leader Binder, who locks out the top five. Rookie and Austrian GP winner Joan Mir (Leopard Racing) was sixth fastest in the rain at Silverstone, ahead of Jules Danilo (Ongetta-Rivacold). Jorge Martin (PULL&BEAR Aspar Mahindra) took P8 in the session, ahead of another crasher in Sky Racing Team VR46 rookie Nicolo Bulega. Bulega’s teammate Lorenzo Dalla Porta, who is the current leader in the CEV Repsol Moto3 Junior World Championship and comes into the MotoGP paddock full time for the first time in Silverstone, put in an impressive performance to complete the top ten.