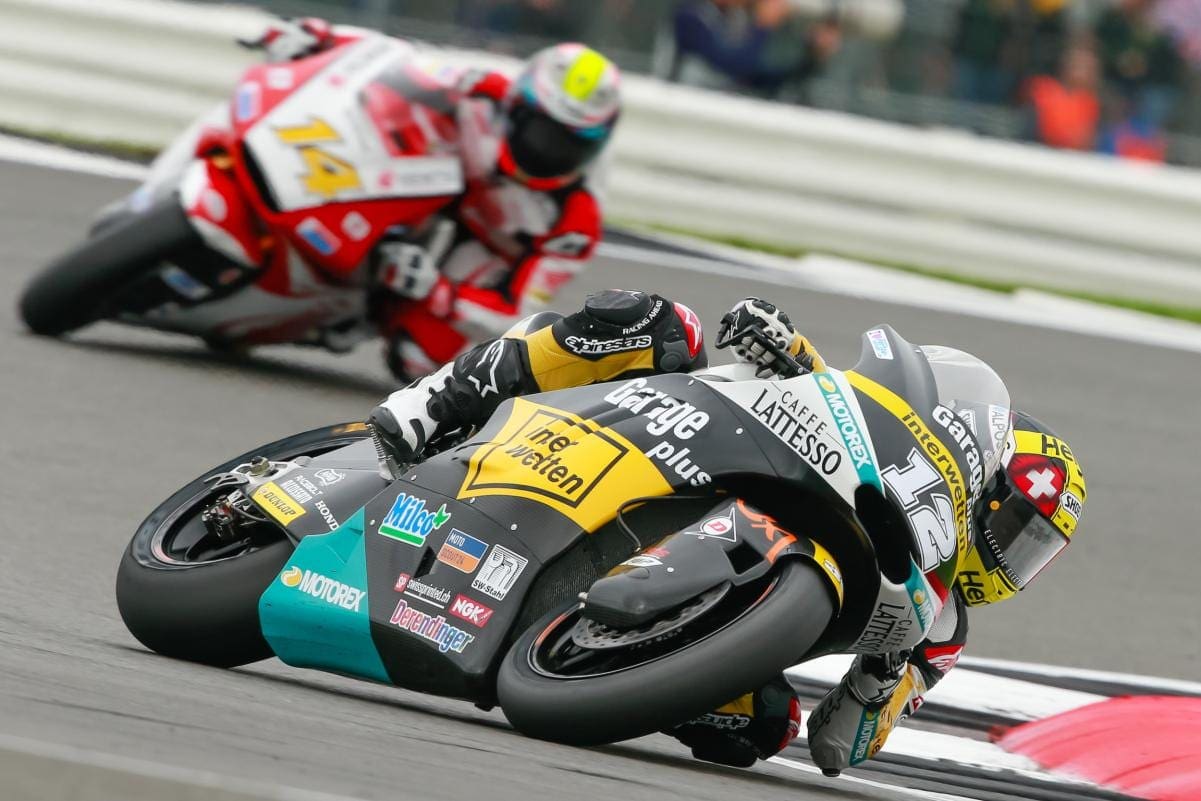 Tom Luthi (Garage Plus Interwetten) has taken the win in the intermediate class at the British GP, as the Swiss rider came back from having sat out the Czech GP to get straight back to the top. In the battle behind over the last few incredible laps of the race, Franco Morbidelli (Estrella Galicia 0,0 Marc VDS) beat Takaaki Nakagami (Idemitsu Honda Team Asia) in a last lap duel after Johann Zarco (Ajo Motorsport) and polesitter Sam Lowes (Federal Oil Gresini Moto2) collided. Reigning champion and points leader Zarco was subsequently given a 30-second time penalty for the incident, which puts him outside the points finishes.

Jonas Folger (Dynavolt Intact GP) had the best the launch off the line, as the man lining up in P3 got the jump on home polesitter Sam Lowes to lead the pack into Turn 1, as a lead group of Folger, Lowes, Zarco, Hafizh Syahrin (Petronas Raceline Malaysia) and the Estrella Galicia 0,0 Marc VDS duo of Alex Marquez and Franco Morbidelli fought it out behind. The Brit had a safe lead in the initial laps, before a crash for Marquez saw the 2014 Moto3 champion slide out of podium contention and the pack shuffled. With Folger then dropping back, it was Luthi who charged to the front, leading the pack with a safe advantage and crossing the line clear of his nearest challengers as the battle raged behind.

Luthi returned to Silverstone following a heavy crash in the qualifying session for the Czech GP, as the Swiss rider lost control of his machine in the last third of the session. The crash knocked the former 125 world champion out and he suffered concussion from the incident; heading to hospital to be kept under observation and playing no further role in the race weekend. Riding only six days later at the British GP, Luthi had a steady weekend before finding incredible pace in the race to take the win.

Franco Morbidelli had seemed outpaced by his teammate in the last race in the Moto2 world championship, but came back in style in Silverstone to take an impressive podium finish and equal his best ever result in the category. In with the frontrunners for much of the race, Morbidelli took Nakagami in the final stages to hold onto P2 and impress once again, as the Italian-Brazilian continues to make good inroads in the intermediate category.

Assen winner Takaaki Nakagami had a great race in the UK to take another podium at the track, following his impressive P2 in the British GP in 2013 behind Scott Redding. The Japanese rider stayed in the mix throughout the race and made some good attempts on Morbidelli for P2, before crossing the line to complete the podium and get another good haul of points.

Rins began the Moto2 race in Silverstone from P19 after breaking his collarbone in a training crash in the week before the event, and the gap at the top of the table looked set to grow once again. However, steadily making his way through the pack, the Spaniard was knocking on the door to the top ten by half race distance, with an incredible ride through the pain as he hangs onto his championship aspirations ahead of his move up to MotoGP with Team Suzuki Ecstar in 2017. Staying on the bike and making it into P10 with lap times almost matching those at the front, the former FIM CEV Repsol Moto3 championship winner proved his mettle as he crossed the line in P7 after the drama ahead on track. With neither of his closest rivals Zarco or Lowes scoring, an incredible turnaround now sees the Spaniard only ten points down on the defending champion in the title fight.

Simone Corsi (Speed Up Racing) had a solid ride into P8 and stayed away from drama, with compatriot Mattia Pasini (Italtrans Racing Team) coming home in P9. Axel Pons (AGR Team) completed the top ten, with Lowes and Zarco then classified in P21 and P22 respectively.

Moto2 will return at Misano World Circuit Marco Simoncelli for their next showdown, as 6 races now seem like an age ahead of the season finale – with only ten points separating the top two in the table.